You know what’s not so super? Being a superhero’s mom. But in Netflix’s new series Raising Dion, Alisha Wainwright makes all of that worry, wonder and WTF? look really good. The Shadowhunters alum stars as Nicole, a widow whose young son suddenly manifests the ability to move objects with his mind. The revelation is exciting to comics-obsessed little Dion but terrifying to Nicole, and Wainwright excels at tempering her character’s usual concerns about her child’s well-being with the crazy, new fear that his powers might be the end of him.

Wainwright is excellent throughout the first season, filling Nicole with a sunniness despite the character’s weariness from navigating both Dion’s grief over his father’s death and her own. But we’d like to draw special attention to a scene from the premiere. When Dion can’t sleep, he climbs into his mom’s bed and wonders why they never talk about his dad. Wainwright keeps Nicole on the knife’s edge of giving in to her sadness as she tells him the story of how his father lost his life saving a stranger. The actress somehow manages to convey pride, bitterness and aching loss through just her tone of voice — all while holding back most of her tears and cradling Dion close. Each of his innocent questions push her closer to completely losing herself in her sadness, but then you can see Wainwright marshal what’s left of Nicole’s inner fortitude to be strong for her son.

She lifts her eyes. She takes a shaky deep breath. She kisses her son’s head to hide her face when the moment becomes too hard. As they do throughout the series, Wainwright’s tiny acting choices ring true in a big way — making her a hero in our book. 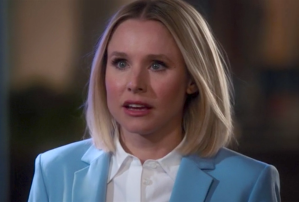 HONORABLE MENTION | The Good Place‘s Eleanor is kind of famous for being a self-serving jerk… so we sat up and took notice this week when Kristen Bell showed us her more vulnerable side. Already heartbroken over losing Chidi, Eleanor felt like she was screwing up the experiment, and Bell put up a tough front as Eleanor angrily lashed out at her friends. But then she bared her insecurities to Michael, Bell’s voice quaking as Eleanor admitted she can’t handle all this pressure. Eleanor did get back on the horse, though, and Bell wowed us one more time as Eleanor sent Chidi off to spend time with Simone, smiling bravely even though she knew they might fall in love again. If there’s a Good Place for actors, we’re saving a spot for Bell there. 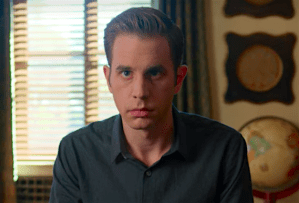 HONORABLE MENTION | Ryan Murphy’s wild Netflix satire The Politician certainly went off the deep end from time to time, but Ben Platt‘s sturdy lead performance as ambitious high schooler Payton Hobart helped keep the whole thing rooted in true human emotion. He especially shined in Episode 7, as a comatose Payton had a tender heavenly vision of his dead friend River and then, after waking up, passionately confessed all of his personal failings to the school principal after she demanded his resignation as class president. Plus, Platt gave us one of the great on-screen ugly cries as Payton broke down in jagged sobs while watching his mom Georgina fly off to an ashram. It was stunning to watch such a composed young man completely fall apart like that… and it’s a credit to Platt that he made a prickly character like Payton so compelling. 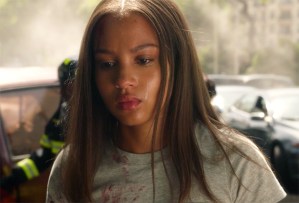 HONORABLE MENTION | Just as Athena’s daughter became a hero in the midst of a tsunami on Monday’s 9-1-1, so too did her portrayer, Corinne Massiah, emerge as a star on the rise. Thrust into a devastating life-or-death crisis, May cycled through an entire spectrum of emotions — panic, fear, uncertainty and, ultimately, determination — commanding our attention with a powerful portrayal of a young woman in the defining moment of her life. When she thought she lost her charge, we felt the numbness of her grief wash over us, and when she realized the opposite was true, we shared in her unimaginable relief. It’s a good thing this harrowing ordeal concluded right before a commercial break, because we really needed the recovery time.