Warning: This post contains spoilers for Season 2, Episode 2 of The Masked Singer.

For The Masked Singer‘s latest castoff, it’s been a bear of a week.

In Wednesday’s episode, Panda lost both her faceoff against Flamingo and her smackdown against Leopard, leading to the night’s only unmasking. When the giant, black-and-white head came off the costume in the final moments of the episode, the celebrity inside was… professional boxer-turned-TV host Laila Ali. (Watch the moment unfold via the video above, and go here for the full recap.)

On Thursday, TVLine got Ali, who currently hosts OWN’s DIY series Home Made Simple, on the phone for a few minutes to discuss the judges’ kinda unusually rough critique (and the parts of it we didn’t see), the reason getting booted in Episode 2 wasn’t that bad after all, and that bewildering booty.

TVLINE | I have to tell you, the padded pants in that costume threw me off my game last night.
That was the whole point! [Laughs] That was strategically thought through. You know what got you? It was the shape of that butt. I had them shape that butt so realistic, so it would look like it wasn’t padded. It looked like a real person’s butt, right?

TVLINE | It was strategic booty, and it worked.
[Laughs]

TVLINE | The judges seemed a wee bit harsh, right?
Oh, you know. Hey — they said a lot more than that. They edited out a lot. That went on for, like, 10 minutes. I swear. I was like, man! But it was fun. It was definitely fun. There are just so many levels of talent that come up there. Their job is also to be entertaining and to be funny. At the end of the day, I’m not a singer. So there was really nothing they could say that was gonna hurt my feelings. I totally thought that I was going to go on longer than that, but it all depends on who you go up against. Maybe if I went up against [Episode 1 castoff] Johnny Weir or the other guy, the YouTuber [Episode 1 castoff Tyler “Ninja” Blevins], I’d still be there. But they pair it up how they see fit, and may the chips fall where they may. I’ve never been a strong singer, so that said something that they put me in that bracket.

TVLINE | Booty aside, did you have any say in how Panda’s face would look or what the character would be wearing?
They have the concept, and the designer is amazing. Their team is really great at what they do, and you always want to defer to the experts. But yeah, there’s definitely say in terms of the Panda’s clothes, the jewelry that the Panda had on her hands — those were my ideas… For me, I had the choice of whether I wanted to be padded or not. I was like, “Totally. I want to be padded.” I could have been more padded, but I was like, no, because it was already heavy. And when I first saw the butt, I was like, “No, no, no, no. We have got to shape this booty.” Because at first, it looked like I had a pillow in my butt. And I was like, “That’s going to be a dead giveaway.” I wanted them to really be wondering if I’m padded or not, and I feel like I look like I really could have been chubby. It threw them off. 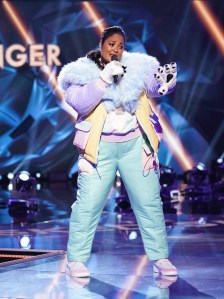 TVLINE | How did you figure out what the character’s physicality was going to be?
That was my own thing. You can’t make any facial expressions, and a big part of singing and performing is your facial expressions, right? And making eye contact, and you can’t do that. So you have to use your body and keep moving. So it’s like, who do you want to be? What do you want to convey. For me, I kept touching my face and saying, “Thank you, thank you.” I wanted to come off as humble and kind and sweet. Then my plan was to continue doing strong, powerful, female empowerment-types of songs, to see that change: The Panda being shy, but then woah when I start singing those type of songs. But obviously, I didn’t make it far enough to really do that. [Laughs]

TVLINE | In Episode 2, you sang “Stronger (What Doesn’t Kill You)” by Kelly Clarkson and DJ Khaled’s “All I Do Is Win.” Did you know what your next song was going to be if you went through to the next episode?
I had songs in mind. But hey, they’re buried now. [Laughs]

TVLINE | You’ve done reality TV competitions before, and you often come out on top.
Or do well. I went to the finals on Dancing With the Stars [Season 4], which is great, because that was my goal, to get to the last show. It’s in the hands of the judges and the audience, so you can’t put your heart all the way into it. But I at least thought I’d make it halfway through this show. I didn’t think I’d have to go up against strong singers in the very beginning like that. But hey, what can you do?

TVLINE | Last season, the vocals were not this strong, especially not this early in the competition.
Yeah, I was surprised.

TVLINE | What did you tell the people in your life you were doing when you were shooting The Masked Singer?
I’m super busy anyway. I’m usually shooting Home Made Simple. But this came in the summertime, when I usually have a little downtime. And it was crazy, because my family was going on vacation for 10 days. And I was so sad that I wasn’t going to be able to go with them. Just to go visit family… I was like, “My kids are going to be gone, and I’m going to be so sad.” Because I’m never home. I usually travel and leave to go to work, they don’t leave me. But I had signed up for the show and I had to block off that time in case I made it. But then when I got put off, I called my husband and was like, “Guess what? I get to go with you guys!” I told my kids I couldn’t go on vacation with them because I had to work. My kids didn’t even know!