During Wednesday’s Masked Singer, host Nick Cannon gave a startlingly real description of what it’s like to take part in Fox’s loony reality singing competition, and it’s too apt not to share: Those who don’t get voted off as the weeks go by “keep wearing a sweat-drenched costume while lying to their friends and family.” Puts the show in a whole new light, no?

Anywhooo, this week’s episode included just two faceoffs: Black Widow vs. Leopard and Flamingo vs. Panda. It also featured a flashy new video floor, a cameo by the Almost Family ladies and a new adjective for busty contestants: “ma-chest-ic.” (Thanks, Nicole Scherzinger.)

The former Pussycat Doll was joined, as usual by her fellow judges: Ken Jeong, Robin Thicke and Jenny McCarthy. Read on for how it all shook out: 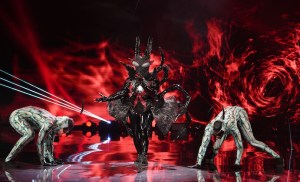 BLACK WIDOW VS. LEOPARD | From the moment she hit the stage, Black Widow showed some very impressive physical flexibility (that low side lunge!) via what Thicke deemed her “voluptuous” frame. “Welcome to my empire,” she said in her video package, which also featured a painting of a peach, a prop crown and crystal balls. She mentioned that she’s “edgier and darker” than we’re used to, and the phrase “director’s cut” was bandied about a bit. When it came time for her to perform, she absolutely nailed Whitney Houston’s “I Wanna Dance With Somebody” — even the high notes. (My guess: Glee grad Amber Riley.) How can I best sum up Leopard’s inaugural performance? How about the way McCarthy so eloquently put it: “We totally got tricked!” Yep, when Leopard started singing, it became clear that the very tall person underneath the kitty costume is male, not female. And he can sing! Queen’s “Somebody to Love” gave Leopard a great showcase for his rich voice. Given his accent, his height, the reference to fashion and relationships and a clue in his video package about being “out of hits and out of time? Yeah, I’ve got a good feeling about this one. (My guess: Seal.) Winner: Black Widow! 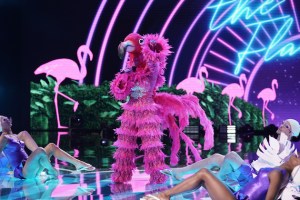 FLAMINGO VS PANDA | Flamingo’s clue package came in the form of a “ZooTube” video, and references to beauty and fashion could mean that she’s a beauty or fashion vlogger. But the woman clearly has some stage training and can hold a crowd, not to mention that her voice and body, in the words of the eternally missed Playing House ladies, be bangin’. She performed Jonas Brothers’ “Sucker” and freestyled like nobody’s business over the final chorus. (My guess: The Real co-host Adrienne Bailon.) The focus of Panda’s clue video was her father; her costume is an homage to him and his values. “You taught me that shyness was a virtue. You don’t have to walk into a room banging your chest,” she said, flipping through books with titles like “Cookin’ Like Mama” and “Going Pro.” She sang Kelly Clarkson’s “Stronger (What Doesn’t Kill You)” and… it was clear she’s not a professional singer. (My guess: No clue.) Winner: Flamingo!

THE UNMASKING | Panda lost her smackdown against Leopard and was revealed to be former boxer-turned-TV personality Laila Ali. (Read a post-unmasking interview with Ali here.)