Being a new dad is full of highs and lows, and A Million Little Things‘ Eddie experiences both of those states in quick succession during the show’s Season 2 premiere.

The good news: He and Delilah are the parents of a healthy baby girl, whom they name Charlotte (or “Charlie” for short). The bad news: Katherine is so gutted by Eddie’s admission of paternity that she takes off at the end of the episode, and no one knows where she’s gone.

Read on for the highlights of “Coming Home.” (And then make sure to read our post mortem to hear what stars David Giuntoli and Grace Park had to say about Katherine’s big decision.) 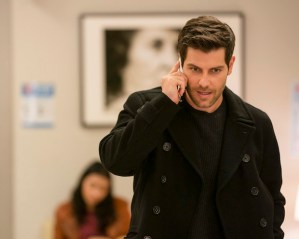 THE TRUTH HURTS | The episode picks up directly from the end of the Season 1 finale, with Katherine and Eddie sitting on the bumper of the van outside their house. “I want to come home. There’s nothing I want more. But I promised you no more lies,” he says, steeling himself. “So there’s something I need to tell you: It’s not Jon’s baby.” She immediately starts crying as he explains why he’s hurting her again. “I couldn’t ask you to take me back and lie to you,” he says, but she interrupts him when her phone buzzes with a text. “Delilah’s in labor,” she reports flatly. Eddie asks her what he should do, and she angrily instructs him to go to the hospital and be there for the baby “the way you weren’t there for Theo.” He drives off. She ugly-cries.

WELCOME TO THE WORLD, BABY GIRL! | In the birthing suite, Delilah cries to Regina that she forgot how much labor hurts. Rome hangs out in the waiting room and kills time by calling P.J., who doesn’t have a lot of time to talk. What we know but Rome doesn’t: The teen is skulking about in Delilah’s home (!). (Side note: First Barbara, then PJ: Does his entire family have skeleton keys to that house or what?) 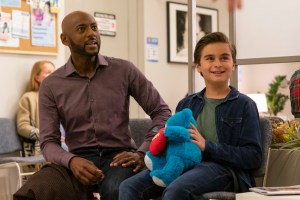 The episode is told using various flashbacks, but to keep thing simple here, I’m going to give it to you chronologically. Eddie, Gary and Maggie make their way to the hospital. The guys entertain the idea of leaving to buy a crib, but before they can even leave the hospital’s garage, Rome blurts out, “I told Regina I want a baby.” The trio briefly discusses how Regina hasn’t changed her mind about starting a family… then Gary uses the conversation to segue to how he knows Eddie is the dad of Delilah’s baby. “Two years ago, I drove Jon to get a vasectomy. That is your baby,” Gary says pointedly, but not angrily. Interesting note: Rome didn’t know, though we later learn Regina did.

“You weren’t there last time, but you can be there this time,” Gary tells his friend. “You take so much crap from me, and that’s never going to change. But you know I love you, and I know you deserve this… don’t regret any more of your life.”

Eddie runs back inside and makes it to the delivery room just in time for Delilah’s final pushes. When she tells him he can’t be there, he reassures her that Sophie and Danny still don’t know. “But our friends do,” he says. “They already did.” A few minutes later, Charlotte is born.

KATHERINE, OUT! | At Katherine’s, she tries to keep herself together while she and Theo make cookies. But when they get the text that Delilah has had the baby, that’s it. She packs a bag and takes off once she knows Eddie is on his way home — he thinks she’s going to take him back, which is a nice little screw-you on her way outta there — leaving Ed to be Theo’s primary parent in her absence.

Days later, she still hasn’t returned. Eddie tells Theo that she’s off working on a case, but secretly, he’s worried. During an outing to get the baby a crib, Eddie eventually gets a quick text from his mother-in-law that Katherine is hiding out at her house. But when he goes there and begs her to come home so they can talk about everything, she refuses. 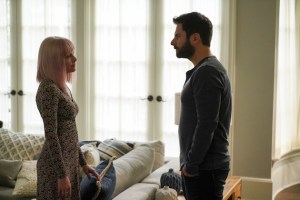 IN WHICH MAGGIE READS SOMEONE FOR FILTH | Maggie and Gary’s nascent cohabitation hits a snag when Gary throws out all of her cancer medication without consulting her. “I feel like my boyfriend threw away my stuff without asking me,” she says when he asks her what’s wrong, and his reasoning — that now that she’s no evidence of disease, there’s no reason to keep them — doesn’t sway her.

She’s still angry when she arrives at the hospital to see Delilah, who’s having trouble getting the baby to nurse. Her shrew of a lactation consultant (hi, Girlfriends’ Guide to Divorce‘s Alanna Ubach!) isn’t helping much, either. (Real talk side note: I FEEL SEEN. Breastfeeding can be hard, y’all, and sometimes the people who are supposed to help new moms figure it all out just add to the problem instead of making it better.) When the consultant acts like formula is liquid poison, Maggie has had enough. “I’m gonna have a baby someday. And thanks to my double mastectomy, I am never going to be able to breastfeed,” she says, channeling her ire into a laser beam of shade directed at the hospital worker. “You know what I am going to do, though? I’m going to be a fantastic mother, because she is my friend, and I will learn from her.” DAMN, Maggie. Also? YES, Maggie!

Later, when she’s less angry, Maggie confides in Gary that the last time she threw out all of her cancer meds, she found a new lump the next day. He apologizes, and she forgives him, but she’s still raw. She takes off her wig and gets in the shower, and Gary disrobes and follows her. He kisses her bald head. She kisses his chest scar. Brandi Carlile’s “The Story” plays, and everything is a lot better for everyone.

WHAT’S PJ UP TO? | On Rome’s recommendation, PJ has a therapy session with Maggie. “I think my dad isn’t really my dad,” he confesses, vaguely referring to the video of Jon he watched on his computer. “I just want the truth,” he says. Later on, we see that he took a few things from Delilah’s house: a photo album, and the Harvard sweater that Sophie, Danny and Delilah bequeathed to Gary.

At home with Regina, Rome tells her that he does want a baby, “but I want us more.” Hmm… why do I not feel like this is a viable, long-term situation for them?