Fluff up your big furry head and dust off your sequined shoes: The Masked Singer is back for Season 2.

Wednesday’s two-hour premiere reunited judges Jenny McCarthy, Ken Jeong, Nicole Scherzinger and Robin Thicke with host Nick Cannon as they began the guessing game anew: Who were the celebrities (a loosely applied term) underneath all of the fake fur and foam rubber? They’re “people who love drama, mamas and baby mamas,” Cannon told the audience — wait, what? — adding that the clues about each performer will be “much, much harder” this season. Oh, and there’ll be smackdowns between the matchups’ losers to decide who’ll ultimately go home.

Without further ado, let’s get to the battles! 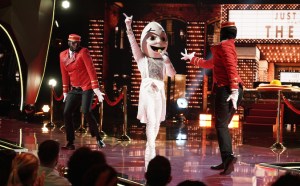 BUTTERFLY VS EGG | “She’s got slim legs,” Thicke said, noting that Butterfly looked tall as she took the stage. “For the past year, I’ve been waiting patiently in my cocoon for the promise of metamorphosis,” the winged one told us in her pre-performance package, adding that she was “terrified by the one place I used to call home” — which visuals indicated was London — and that “I’m here to take you to church.” After all of that, I was surprised how young her voice sounded when she gave an energetic rendition of Jessie J, Ariana Grande and Nicki Minaj’s “Bang Bang.” (My guess: Michelle Williams of Destiny’s Child, though I admit I’m stealing it from my co-worker Andy Swift.) In his taped piece, Egg a) executed a lovely bell kick, b) mentioned how he’d been “on top of the pyramid” for years and c) showed off a dream catcher that prominently featured a sketch of an elaborate wedding gown. Even before he’d begun singing “Just Dance” by Lady Gaga, I was pretty sure I knew who it was. (My guess: Olympic ice skater Johnny Weir.) Winner: Butterfly! 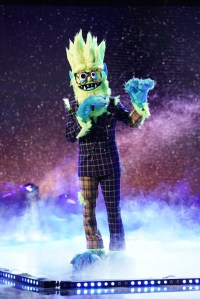 THINGAMAJIG VS SKELETON | As we learned from an early sneak peek, Thingamajig can sing. He croons “Easy” by the Commodores in simple, effortless fashion — though I’ve got no idea what magic case, sneakers or cupcake with a 4 candle on it in his set-up package have to do with who he is. (My guess: Whose Line Is It Anyway? alum Wayne Brady.) Skeleton seems a bit older. “I’ve been around the block a few times, but I’m far from dead,” he tells us in his video, which also indicates that he’s often found in a supporting role. He also mentions a “wild and crazy party,” which gives me early Saturday Night  Live vibes. When it’s time, he doesn’t really sing, but that’s OK because he’s performing Sugarhill Gang’s “Rapper’s Delight.” (My guess: Former SNL-er Dan Aykroyd.) Winner: Thingamajig!

LADYBUG VS ROTTWEILER | The red-and-black speckled songstress seems to have a southern accent, and the following items show up as clues in her video: KSOR-TV channel, a ham leg and a bridge.”Being born into the limelight, the media was always keeping up with every piece of gossip and family feud,” she says. Her vocals on “Holding Out for a Hero” by Bonnie Tyler aren’t the strongest, but they’re also not the worst we’ll hear in the episode. (My guess: I got nothing yet.) Most of Rottweiler’s clues seem to indicate he’s from the sports world (“the first time I touched a pigskin under the Friday night lights”), but there are references to blue roses and fantasy football leagues too, so what the heck do I know? Oh, and he mentions choosing his costume because he once was bitten by a Rottweiler. And when he performs Hall & Oates’ “Maneater,” he can really sing — which shocks the judges. (My guess: No clue. Yes, I DID just Google “celebrities bitten by animals.” And no, I’m not proud about it.) Winner: Rottweiler! 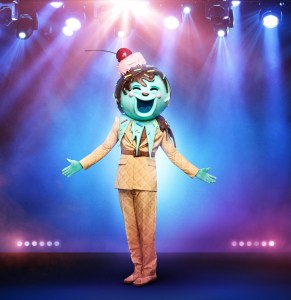 TREE VS ICE CREAM | Confession: Throughout her video package, I thought Tree was singer Darlene Love, based on how she talks about wanting to be known for “more than just one thing” — singing popular Christmas songs — and how she hoped a Masked Singer win would “inspire you to think of me more than once a year.” But the baking aspect of her clues then made me think she was Patti LaBelle, and I felt good about that… until she started singing. Tree showed off serious vocal chops during Panic! at the Disco’s “High Hopes,” but her voice is higher than both Love’s and LaBelle’s, so [shrug emoji]. (My guess: Maybe American Idol winner Jordin Sparks? Though I did watch LaBelle’s disastrous tree-lighting ceremony performance again while conducting research, and it brings me such joy, I felt the need to share it with you.) Ice Cream — aka the costume I’ve voted Most Likely to Be Worn by a Serial Killer — is super tall and very proud of his accomplishments: He’s turned his fantasy into a reality, he tells us in the package, “and now I’ve got over a billion reasons to be proud of my hard work.” He also breaks a board with his hand and is surrounded by emoji, so make of that what you will. His performance of Lil Nas X’s “Old Town Road” is helped by the monotone nature of the song, and he doesn’t really dance. Definitely not a trained singer. (My guess: That ’70s Show‘s Ashton Kutcher.) Winner: Tree!

Did you guess the identities of this week’s unmasked singers? Grade the premiere via the poll below, then hit the comments with your thoughts on the episode.