Legacies is taking a slightly different approach to vampires in Season 2. As announced earlier this summer at San Diego Comic-Con, Thomas Doherty (Descendants) is joining the cast of the CW drama as Sebastian, a seasoned bloodsucker “with old ideas about the way things work.” And now TVLine has your exclusive first look at Sebastian in action.

“The character is in response to how difficult it is to write a contemporary vampire in this newly woke world,” executive producer Julie Plec explains. “By definition, vampire lore is rooted in denying women agency, predatory culture and all these other terrible things [that we know are wrong]. He’s our response to that.” 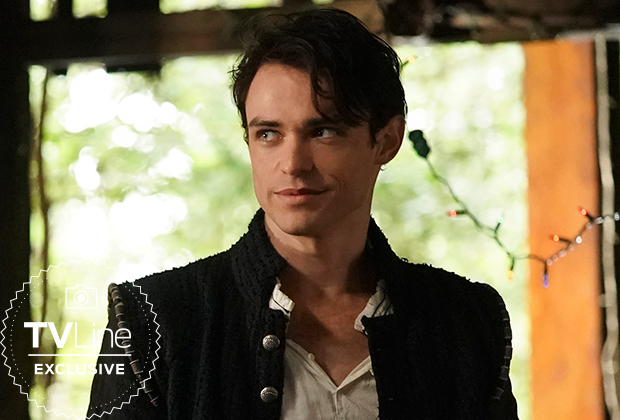 Regardless of how Sebastian’s story unfolds, however, Plec promises a “very, very, very smolder-y” performance. “He walks through the halls of the production office and everybody has a Diet Coke commercial moment.”

Of course, Sebastian isn’t the only new character being introduced in Season 2. As TVLine exclusively reported, Alexis Denisof (Angel) is playing Professor Vardemus, an “urbane British sorcerer” who comes to work at the Salvatore School; Bianca Kajlich (Dawson’s Creek) will play Sheriff Mac, the new protector of Mystic Falls; and Leo Howard (Why Women Kill) is playing her son Ethan. Additionally, Bianca Santos (The Fosters) will play Ethan’s sister Maya — and they both have eyes for Hope.

Legacies returns with new episodes on Thursday, Oct. 10 at 9/8c. Your thoughts on the show’s newest addition, or any of the others? Drop ’em in a comment below.