In Sunday’s Fear the Walking Dead, Alicia came face to face with the arboreal artist who’s been painting “If you’re reading this, you are still here” on trees all across the post-apocalyptic landscape. And I’m sorry to report that no, it was not Sue Heck. Who was it, and did Alicia get from this individual what she hoped to? Read on and find out. 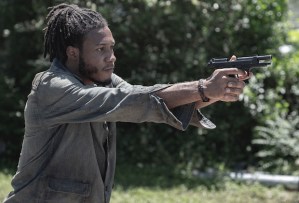 ‘PEOPLE WHO MAKE A SHOW OF ALL THE GOOD S— THEY DO ARE USUALLY FULL OF THE OTHER KIND’ | As “You’re Still Here” began, Strand leapt into action to save Alicia from an approaching walker, then sensibly questioned whether it was smart for her to be in the field when she could no longer bring herself to kill the dead. Before long, they received a call from the fellow we met in “Channel 4.” His name was Wes, and since Logan shot up his bike because of an imagined association between him and the do-gooders, “You owe me a ride,” he said. Specifically, he wanted a ride to the police station that he and his brother called home. En route, Wes expressed a sentiment that I doubt will be alien to most viewers. Upon learning that Alicia was spending her days pursuing the painter of those inspirational messages, he asked, “Don’t you guys have bigger fish to fry?” (Maybe it’s just because he hasn’t repeated the same dialogue over and over yet, but I like this guy.)

When the trio reached the police station, Wes went inside to get his brother while Strand and Alicia unloaded his bike. In no time, shots were fired, and a middle-aged white dude tore out of the building and stole our heroes’ truck with the bike still on it. “I take it that wasn’t your brother,” cracked Strand. Yeah, no. When they made the mistake of using riot gear to fight off the walkers who’d been drawn by the noise, Strand wound up being blinded by tear gas. As for Alicia, she was still too post-traumatically-stressed to be of any use. Once the three of them were safely inside, Wes admitted that he hadn’t had a brother for a while. He’d wanted to go to the police station to take back something that the white dude had taken from him. Needless to say, he couldn’t believe that Alicia and Strand’s top priority was getting back out there to help the dude he’d shot. 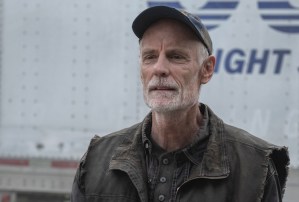 ‘THIS IS THE WAY THINGS ARE NOW — WE SHOOT, WE KILL’ | Meanwhile, Morgan “helped” Al stash copies of her precious, precious tapes in a bank vault. “You don’t think this might be overkill?” he asked (I assume) rhetorically. In turn, she wondered why he had showed up on a run she hadn’t needed backup on. Predictably, he didn’t blurt out, “Because I like Grace, and it makes me feel like I’m losing my family.” Shortly, Alicia radioed Morgan and Al to go after the guy Wes had shot. But since Alicia had disclosed the direction in which the chap had been traveling, Logan and his crew had no trouble blocking their path. “What I’m doing is bigger than you,” said the villain, using the kind of cryptic language in which all baddies are fluent. “It is gonna help people, just not in a way you’re gonna like.” So he wasn’t going to move his rig out of Morgan and Al’s way unless they revealed the location of Clayton’s oil fields, which they wouldn’t. As they gave up, Logan couldn’t resist baiting Morgan by remarking that helping others wouldn’t make him feel any better about failing his wife and son. When Morgan lunged at him, Logan added, “You don’t want people in your business, don’t put it on TV.”

Back at the police station, Wes further endeared himself — to me, anyway — by guessing that Alicia was dying to ask what the white dude had taken from him, if only so that she could respond with a relevant story. He was so onto their shtick and didn’t need her and Strand “to heal [his] wounded soul,” thank you very much. Nonetheless, he did wind up sharing that his brother had died early on — “nothing melodramatic” — and that the bike had been his. Wes also didn’t think that they could change the way things now were. But you can, Alicia insisted. He hadn’t killed anyone yet, so he could help the guy he shot! Though Wes was like, “Uh-huh, whatevs,” he did volunteer to help when she hatched a plan to get the squad car running. 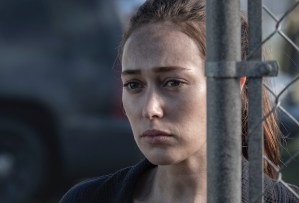 ‘ADIOS, YESTERDAY; HELLO, TOMORROW’ | Next thing we knew, Wes was outside shooting up walkers. (If there was another exit, I’m not super duper clear on why it was so important to clear the zombies away from the front. Anyway… ) Despite his best efforts, a walker made it into the building, where Alicia… froze. A blind Strand actually wound up taking down the walker, with Wes picking off the ones that followed. Later, Alicia radioed Morgan and Al to let them know they’d located the injured man, only he’d turned. When Wes approached the walker to retrieve from his satchel the stolen item, whoa — the guy hadn’t actually turned after all, he was just a hobbler. When he began throttling his shooter, Wes stabbed him in the side and demanded to know where his manuscript was. “I just wanted to finish it,” said the dying man, using his last breath to offer up a book review. “That’s good stuff.” (Oy, FTWD. Just oy!)

Despite Strand and Alicia’s “Help any way you can” mantra, neither of them tried to stop the guy from bleeding out. Instead, Alicia hollered at Wes in shock. “You killed him because he stole your book?!?” And look — yes, Alicia, that is silly as hell, but you’ve been wasting time looking for someone who’s painting “Hang in there” signs, so you can just go ahead and have a seat, mmkay? Wes was mad, too. He hadn’t cared that he was going to kill this dude, and she’d made him care, dammit. Ironically, he no longer wanted his book. “He died for it,” Wes said. “He can keep it.” Later, Alicia started reading the McGuffin, which she guessed was dedicated to Wes’ brother, Derek. When she flipped to the last page, the words on it — “If you are reading this, it means you’re still here” — made her realize that holy crap, she’d actually met the person she’d been searching for.

‘I’M NOT GONNA FIND WHAT I’M LOOKING FOR IN ANYBODY ELSE’ | Off that revelation, Alicia deduced that neither Wes nor anyone else could give her the perspective that she needed to see things so optimistically. She had to affix those rose-colored glasses herself. So she took the painting gear from Wes’ bike and started leaving notes on trees, among them one of mom Madison’s favorites: “No one’s gone until they’re gone.” Somehow, this restored Alicia’s ability to kill the dead. As Strand’s vision returned, Morgan confided in Al that he wasn’t running away from anything — oh, really, sir? — he was just holding on to his painful recollections of his wife and son because he feared losing the good memories to which they are attached. Luckily (don’t do it), she had an idea (please, no) about how he could discard the bad (stop) without losing the good (s—, she’s going there): She could interview him about Jenny and Duane. Because an interview is Al’s solution to everything from soul-sapping grief to constipation.

As the hour drew to a close, Logan broke into the bank vault where Al had stashed copies of her tapes. Though he was chagrined that Clayton’s journals weren’t there, he still ordered a lackey to start watching the tapes, assuming that somewhere along the line, one of the good Samaritans had slipped up and mentioned the location of the most-discussed oil fields since J.R. Ewing wanted to drill on Southfork. So, did you assume all along that Wes was the painter? Was the bird Alicia painted supposed to be Amina? Was it a hint that Madison survived? Hit the comments with your thoughts, hopes, theories.