All season long, we’ve known that the stadium would fall on Fear the Walking Dead. Last week, we found out how it would fall. (Damn you, Ennis!) And in Sunday’s midseason finale, we expected to learn whether, as had been so widely theorized, the end of the diamond would also be the end of Madison. Was this the episode that struck out Nick and Alicia’s mom? Read on…

‘ONE DAY, SOMEONE’S GONNA WANNA KNOW WHAT HAPPENED HERE’ | As “No One’s Gone” began, Madison snuck under a walker-detection system made of bottles to get the drop on… Al, as it turned out. After Madison demanded the keys to Al’s SWAT van — and its owner only dropped them nearby — our heroine tripped on another wire and accidentally (or, she insisted, deliberately) shot the documentarian’s dinner. “I got nothing else to lose,” Madison warned. But if she thought she’d been through a lot, she had no idea, Al shot back. Following the opening credits, Madison made the mistake of zip-tying Al. (We know how ineffective that is!) Once Al had freed herself, Madison knocked her out in their ensuing, brief clash and went back out into the night.

In present-day in the van inside the diamond, Naomi had managed to stanch John’s bleeding, at least temporarily. But she still had to get to her supplies in the diamond’s infirmary. Before maneuvering the SWAT van through the charred walkers to get closer to that destination, Al handed over her camera to Charlie and instructed her to keep filming, no matter what. (If ever a character was committed to her one note, it was Al.) Once they were as close to the infirmary as they could get, Al used her wall of machine guns to take out a bunch of walkers, and off Naomi and Morgan went. They’d only barely gotten past the clearing that Al had made in the horde when kaboom! It turned out they had another deadly issue: Alicia was there, murder in her eyes. And she wasn’t alone. 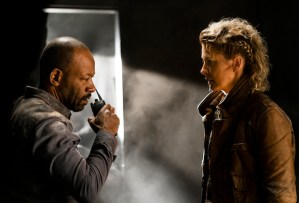 ‘THIS IS NOT GONNA GO YOUR WAY’ | While searching for Nick and Alicia in the distant past, Madison tried to find clues by watching the tapes that she’d stolen from Al when she left her behind. But apparently, she hadn’t left Al far enough behind. In no time, she had caught up with Madison and demanded her tapes back. Oh, and of course, she wanted Madison’s story. “Have you lost anyone you care about yet?” Madison asked. Al only answered with more questions. As Madison became as frustrated with Al as I suspect at that point we all were, the videographer explained that she’d been filming people since before things went bad. Once, she’d been in a village on the other side of the world, where a warlord routinely shook people down. Her revelation of the truth — that he didn’t have the army that he said he did — had set those people free. Finally, Madison admitted that she’d promised her kids a place where they could be safe, but she hadn’t been able to keep that promise. She even delivered a lovely monologue in which she recalled Nick and Alicia’s reaction to a wounded bird they named Amina and tried — and miraculously managed — to save. So she’d do anything to keep from being snuffed out that light inside of them that grew fainter every day.

In the present, Alicia walkie-talkie’d Al and asked what happened to her just wanting to be an observer. Not that it mattered that Al had gotten involved, Alicia added. She knew how much ammo the SWAT van had inside; it wouldn’t last for long. While Naomi and Morgan made their way to the infirmary, John took a turn for the worse. “It’s not gonna end like this,” Al reassured him. In response, he let Charlie film him pleading with Naomi and Morgan to stop running from people. He’d no sooner finished what could have been his last words when the van was rocked by an RPG… and its door fell off. Waiting outside? Alicia, with her gun trained on Al. In no time, Alicia was in the van, holding Charlie at gunpoint and ordering Al to tell Naomi and Morgan via walkie-talkie that it was safe to come out. While they awaited Naomi and Morgan’s arrival, John, unnoticed, turned on the walkie-talkie, tipping off the twosome to what was going on. Keeping watch, Strand radio’d Alicia that Naomi and Morgan weren’t coming out. As Alicia and Al fought, Charlie walkie’d Naomi and told her to hurry. Morgan went in her place, reasoning that Alicia & Co. didn’t want to kill him. Ultimately, Alicia discovered in the van a tape labeled “Amina” and realized that Al had met her mother. Off that revelation, Alicia somehow made her way through all the walkers to intercept Morgan, who was still with Naomi. “My mom’s dead,” Alicia said, taking aim at Naomi, “because of what you did.” 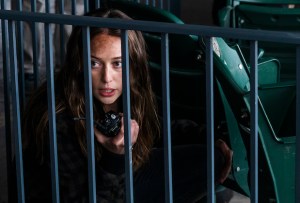 ‘THINGS CAN CHANGE’ | “Let me save John,” Naomi pleaded. But “you don’t get to save him,” Alicia responded. “You don’t get anything.” Naomi tried to remind Alicia that she and her mom had taken her in and helped her. Yeah, well, “I’m not that person anymore,” Alicia spat. But, rather than let her exact her vengeance, Morgan stood between her and Naomi, and convinced her to believe that the good that Madison so believed she possessed was still inside of her. Tearfully, Alicia relented and let Naomi go save John. (Whew.) When next we returned to the present, Alicia, Strand and Lucy were riding along with John, Naomi, Charlie and Al. Why, Alicia wondered aloud, hadn’t Madison mentioned Al? “I don’t think she was exactly proud of the way we met,” Al replied. When she asked how Madison had died, Alicia volunteered to tell the rest of her mother’s story.

In the past, Al, by then pals with Madison, loaded up her latest interview subject with supplies before setting her off again in search of Nick and Alicia. Al even nicely suggested that they might meet again someday without the tripwires and guns. Soon, Madison was reunited with her kids as well as Lucy and Strand. And Lord, at this point, the show’s timeline got totally confusing. The reunited group next found the stadium and decided to settle there. In the present, Madison’s loved ones told Al her story. Which was? Madison, Strand and Lucy had fought as hard as they could to save Nick and Alicia from the horde. Madison had told everyone else to stay inside the stadium; the walls would hold, she told them. But they lacked her faith, so when they opened the gate to let in Nick and Alicia, all of the other survivors tried to run out and were killed. (RIP, Cole.) 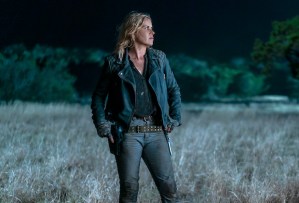 ‘NO ONE’S GONE UNTIL THEY’RE GONE’ | “I tried to talk them out of it,” said Naomi (whose real name, she revealed to John, was June). “But I couldn’t change their minds.” Mel, for his part, had regained consciousness and used Nick and Alicia’s car to save Charlie. Naomi had only joined the Vultures believing that Alicia and the rest had died. As for Madison, she lit a flare and lured the walkers inside the stadium. The walls had been reinforced to keep the walkers out, so she knew that they could keep ’em in. When she realized that she couldn’t escape, she locked herself in. “I was afraid to lose this place, ’cause I thought you needed it to stay who you are right now,” Madison walkie-talkie’d to her loved ones. “But you know it. No one’s gone until they’re gone.” Finally, she dropped the flare, setting aflame the oily walkers and going out in a blaze of “gory.” She died, Alicia said, “so we could live.”

So, what did you think of the midseason finale? Are you sorry to see Madison go? Or do you think she somehow survived? Hit the comments.