Can we talk? Fear the Walking Dead didn’t really ask us that in its midseason premiere Sunday, it just dove right in and started yakking, filling I can only guess how many of Al’s precious tapes. (And just when I was warming to her, too.) On the plus side, the chatter wasn’t entirely idle. After Morgan tried to help out a woman who was afraid to leave the house that her husband had surrounded by landmines to protect them and their son from growlers, our hero told us that he’d realized he needed help, too. With… ? Saying goodbye to Jenny and Duane, the family that he so long ago lost. And the episode ended with a little action as Logan took another stab at villainy. Alpha, he’ll never be, but points for trying. What did he do, and to whom? Read on… 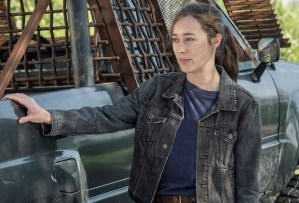 ‘KARMA’S A BITCH, LOGIE’ | “Channel 4” began with the aforementioned talking. So. Much. Talking. And I guess it was valuable if you were tuning into the show for the first time, as it kind of reintroduced our protagonists, hinted at their baggage and drove home once (twice, a dozen times) more their “Help who you can, help how you can” motto. Of course, if you were a regular viewer, it was a challenge not to yell at the TV, “Tell me something I don’t know!” When we did give in and holler exactly that, we learned things like… that the plane landing had made a whole lotta folks believe that the good Samaritans really could help; Sarah & Co. hadn’t fallen for Logan’s change of heart and had dumped him much the way they had Clayton (except “this felt good,” she said); Alicia was determined to find the person who was painting inspirational “You’re still here” messages on trees (Sue Heck, is that you?); and Al had raided a Big Stop so that everybody could record everything at all times. (Enough, Al. Seriously. Enough.) 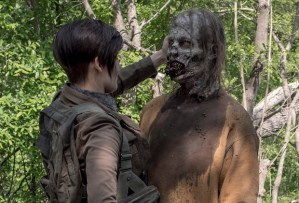 We also were informed that not only had the group left behind the mill so that they could more easily reach faraway people in need, they had no trouble getting to these individuals because they’d picked up some more trucks and now had access to Polar Bear’s oil fields. On the personal front, I could’ve sworn it seemed like Sarah had a crush on Dwight, who refused to let Daniel cut his hair. Scarred as he was, Dwight insisted “it doesn’t matter what I look like.” As for the mother and son surrounded by landmines — a situation that John called “the ugliest mustard I’ve ever seen” — the woman, whose name was Tess, BTW, said that she’d become worried when her husband Ben had gone out to get their boy an inhaler, then stopped responding over the walkie-talkie. But she wouldn’t so much as open the front door to more easily yell across the yard at Morgan and friends; she hadn’t set foot outside the house since the apocalypse and was disinclined to do so now. 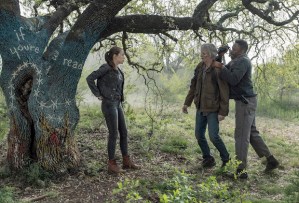 ‘SARAH AND WENDELL REALLY LIKE THEIR TRUCKER MUSIC’ | Needless to say, Ben was toast, a fact that June discovered when she found an inhaler in the backpack of a walker who attacked Alicia beneath one of those look-on-the-bright-side trees that Madison would’ve liked. (My apologies — that sentence was as long as this episode felt.) Back at Tess’ house, we were told that things got so intense that “words cannot describe it.” Only actually, it wasn’t terribly intense, since we knew from Morgan’s tape that he was in no real danger, and words could describe it just fine. As soon as the first walker was blown up on the lawn, the noise drew more walkers. Not knowing how close to the house Ben had placed his bombs, Morgan risked his neck to run in and coax newly-widowed Tess out… along the way, stepping on a landmine. Which didn’t go off. Instead, Tess became so eager to help her helper that she finally came outside to hand him a new pin to stick in the landmine, which bought him enough time to move to safety before zzz. Sorry, I mean kaboom. 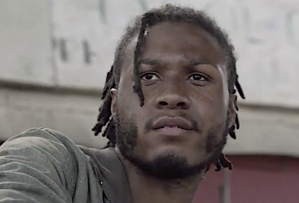 Afterwards, the gang had a big cookout with an improvised pad Thai recipe involving ketchup packets (which sounded scarier than anything else in the episode), and everyone took turns telling Al’s camera what they needed help with, a gambit that again seemed designed more for new viewers than us longtimers. In the end, it all turned out to be like an informercial that the crew was making in hopes of inspiring and recruiting others, who they seemed to presume would miraculously have tape players and electricity. And miraculously, one guy (newcomer Colby Hollman) did have access to a tape player and electricity. But before he could scoot off on his motorcycle and reach out to the do-gooders, Logan and his crew rolled up demanding that he tell them where the oil fields were. I dunno, insisted the newbie, adding that he wasn’t with the people on the tape. To ensure that the newbie wouldn’t follow them, Logan had his bike shot up. As walkers drew near, the baddie suggested that the newbie call Morgan & Co. for help — and tell ’em they’re making more enemies than friends.

So, what did you think of “Channel 4”? I don’t mind the occasional talky episode, but this one seemed to break very little new ground. Grade it in the poll below, then comment away.