We know — it wasn’t that long ago that we suggested that The Walking Dead probably should have ended at the conclusion of Season 8. But damn — the Season 10 trailer that AMC’s zombie drama dropped Friday at Comic-Con has left us all kinds of stoked to see new episodes (starting Sunday, Oct. 6). Why?

1. The Whisperers War
The endless conflict with the Saviors bored us to tears, it’s true. But we have far higher hopes for our heroes’ battle with Alpha’s crew. For one thing, these new baddies aren’t just murderous jerks like the Saviors, they’re twisted freaks who wear walker-skin masks and hang with the undead. And their leader isn’t a pun-loving blowhard, she’s a stone-cold psycho. Speaking of the Saviors’ former big kahuna…

2. Negan 2.0
Yeah, we have problems with Glenn and Abraham’s killer. Big ones. And it makes us uncomfortable how we’ve softened toward him since he became friends with Rick and Michonne’s daughter Judith. Still, we can’t deny that he’s gotten a lot more interesting since he developed characteristics other than a love of hearing himself talk. And it promises to be interesting to see him fighting with, rather than against, his former enemies. 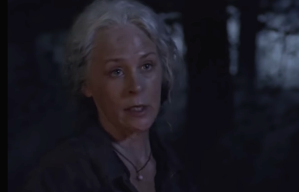 3. Carol vs. Alpha
We’ve been hoping for a showdown between Henry’s grieving mother and the villainess who beheaded the boy since Season 9. And based on that trailer, man, are we gonna get it. “Bitch has to die,” says Carol matter-of-factly. And we freaking love that Samantha Morton’s Big Bad has no clue that Carol is such a stone-cold ass-kicker, she’s gonna make her wish she was dead!

4. Michonne’s Dark Side
That last image of soon-to-exit Danai Gurira‘s heroine brandishing what looks like Negan’s beloved Lucille suggests that maybe, just maybe, he was right when he suggested that the two of them were more alike than she’d care to admit. Question is, at whom was she pointing the potentially lethal weapon? 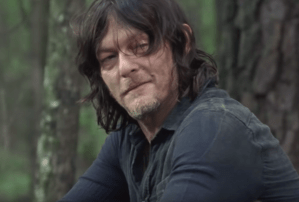 5. Lotsa Caryl
There will be a contingent, we know, that is disappointed that it appears Daryl is being drawn romantically to Connie, not Carol. But (a) we love Connie for him, and (b) Norman Reedus and Melissa McBride’s characters have always worked supremely well as besties. And it seems that not only does showrunner Angela Kang get that, she’s going to play that, big time — maybe not with friendship bracelets, but still.

6. Michonne and… Ezekiel?!?
With Gurira set to depart, we never in our wildest dreams imagined that her alter ego would get the romance with the Kingdom’s monarch that she did in Robert Kirkman’s comic-book series. Now that we know it’s coming, we’re curious as hell to see where it goes (and how his ex Carol reacts).

What do you think? Rewatch the trailer above, then hit the comments. Were we just swept away by a well-edited promo, or are we right — Season 10 really does look that good?