Even before The Walking Dead’s Negan risked his life to save Judith’s in the Season 9 finale, the trajectory that the AMC drama had in mind for him was clear: The villain was being redeemed. But could he be, really?

I think not — and not for the obvious reason, that after he struck out Abraham, he then pulverized Glenn’s head just to teach Daryl a lesson. Many of our good guys have committed atrocities. Hell, Rick led the slaughter of a whole bunch of Saviors. In. Their. Sleep. The difference — and it’s a big one — is that Rick did what he did in hopes of creating a kinder, gentler new world. When his archenemy terrorized a community, it was to scare its members into a servitude from which they’d never be allowed to escape.

What’s more, Negan raped the women that he made his “wives.” Sure, he paid lip service to never having forced any of them to do anything involuntarily. But the options that they were given weren’t options at all. For instance, had Sherry not “volunteered” to be the monster’s bride, he would’ve murdered her actual husband, Dwight (whose face he ironed, anyhow, for running away). That’s not the sorta s— that a character can come back from. 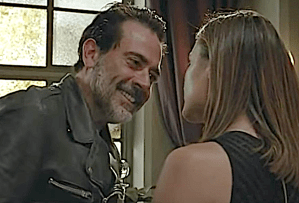 I’ll admit I like the “new” Negan and love his relationship with Lil’ Ass-Kicker. However, even as she and now, to a degree, mom Michonne see the good in him, I’m having trouble with the idea of him as any kind of a protagonist. Having done what he has, it just feels wrong. It just is wrong. Your thoughts? Vote in the polls below, then hit the comments.