Warning: Spoilers ahead. So, unless you’ve already watched the Season 7 premiere of The Walking Dead, you might wanna do what we wanted to during Negan’s “batting practice,” and look away.

Remember how awful we thought it was, waiting all summer long to find out the identity of Negan’s victim in the Season 7 premiere of The Walking Dead? Doesn’t seem like such a bad time right about now, does it? (#ignorancewasbliss) If you can stomach a return to the scene of the crime, here’s how the carnage — and not one but two characters — went down.

‘NOT TODAY, NOT TOMORROW, BUT I’M GONNA KILL YOU’ | As “The Day Will Come When You Won’t Be” began, the Saviors’ merciless leader had already “taken his turn at bat,” prompting a shell-shocked Rick to make the mistake of vowing aloud to make Negan pay with his life. Unfazed, the villain merely dragged him — and his nemesis’ axe — into his RV for a little one-on-one (leaving us still unaware of who’d bit the dust).

“Let’s go for a ride,” Negan suggested, leaving the hatchet where Rick could easily get hold of it. When the RV wouldn’t start, Negan dared Rick to “grab the damn axe.” But, alas, the baddie was well-prepared when Rick did so. Before he drove them away, he instructed his captive to think about what happened, what could have happened and, maybe worst of all, “what can still happen.” Returning to the bridge where the Saviors had left a man hanging, Negan tossed what was now “his” axe into a crowd of walkers and ordered Rick at Lucille-point to go fetch. 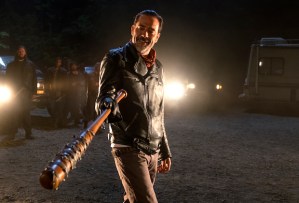 ‘I’M JUST GETTING STARTED!’ | Once Rick had a second to catch his breath atop the RV, he flashed us back to the moment that Negan chose Abraham as his victim. After the first blow, Sgt. Ford spat, “Suck. My. Nuts.” But that was all she wrote for Sasha’s boyfriend, whom Negan kept bashing long after he was dead. “Look at my dirty girl,” Negan said, brandishing Lucille in front of Rosita and asking if she and Abraham had been together. When she couldn’t look at the bat, Daryl literally leapt to her defense.

Though Dwight offered to put an arrow in Daryl’s skull, Negan had another idea. Since “I need you to know me,” he explained to the Alexandrians, he turned around and struck Glenn so hard that it made one of his eyes pop. (And yes, it’s as hard to type a recap with tears in your eyes as you’d expect.) Before Negan finished off his second victim, Glenn turned to his wife and, with what strength he had left, promised, “Maggie, I’ll find you.” Proving himself to be the ultimate psycho, Negan then cracked that Lucille was still thirsty, as she was a “vampire bat.”

‘CHOP, CHOP’ | When Rick didn’t immediately retrieve the axe, Negan warned him to imagine what could still happen (which led to him picturing Carl and everyone else that he loved being struck down with Lucille). Upon completing his task, Rick — clearly as eager to put the hatchet in Negan’s head as we were to see him do so — handed over the weapon, and the two drove back to the site of Abraham and Glenn’s murders. Acknowledging that this all must be rough for Rick, his having been “King S—” for so long, Negan said hey, he could still live a long and productive life… producing for him. He even returned Rick’s axe.

Hauling Rick out of the RV in front of his fellow survivors, Negan informed him that their trip had been about the way he’d looked at him like he’d just crapped in his scrambled eggs — the way Rick was still looking at him. To change that, Negan had his henchman point guns at everyone’s head but Rick’s, and called Carl forward. Next, the madman had the boy lie down on the ground and drew a line on his arm. “Rick,” he explained, “I want you to take your axe and cut your son’s left arm off” — or everybody dies, including Carl.

‘TODAY WAS A PRODUCTIVE DAMN DAY!’ | Desperate, Rick volunteered to have his arm cut off instead. “Not making a decision is a big decision,” Negan warned. Finally, he counted down. Three… two… “Dad, just do it,” Carl whispered. Thankfully, at the last second, right as Rick was gonna do what he had to, Negan stopped him. But it sure as hell looked like poor Rick had broken inside. Which, naturally, “was the look [Negan] wanted to see.”

As the episode neared its conclusion, Negan had Dwight load Daryl in a van. Apparently, Daryl had impressed the head Savior. He’s “not a little bitch like someone I know,” Negan told Rick. With that, he welcomed the grieving survivors to their new beginning and bid them ta ta. In the aftermath, Maggie blamed herself for Glenn and all of them having been out there in the first place. As Abraham and Glenn’s bodies were picked up by their loved ones, we caught a glimpse of a beautiful future that would never be, one in which they were all together, in which Abraham was alive, and so was Glenn — with his and Maggie’s baby on his lap, no less.

So, what did you think of “The Day Will Come When You Won’t Be”? Grade it in the poll below, then hit the comments with your reaction.