After all the lying and deceit, Season 2 of Big Little Lies wrapped up by dropping a steady dose of truth bombs on us. (And was that really it? Here’s the latest on a possible Season 3.)

Sunday’s finale opens with yet more elliptical flashbacks to Perry’s death, and Celeste staring blankly in the shower. She watches some old video of her and Perry on her iPad, smiling at the happy memories… until she happens upon a video of one of her boys watching her through a cracked doorway? (We don’t see what she’s seeing.) Plus, Ed is taking out his frustrations on a punching bag, and even Ziggy is pushing Jane to give Corey another chance. 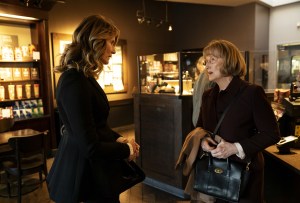 Renata is busy berating a poor Starbucks barista when she bumps into Mary Louise and hammers her for putting Celeste through all of this. Mary Louise just thinks Celeste might need some help, but she sets Renata off when she quips that sometimes nannies are “more trouble than they’re worth.” (Did she touch a nerve?) Renata explodes on her, labeling her a “judgy judger… keep your eyes on your own f–king paper.” Meanwhile, Celeste and Mary Louise’s lawyers prep their clients for what’s sure to be a contentious cross-examination, and we see flashes of what looks like Perry as a kid, covered in blood? Hmmm.

In court, Mary Louise takes the stand, and Celeste asks her if she thinks she’s a bad mother. Mary Louise thinks she’s “committed,” but then lists off all of her violent and erratic actions. She thinks the boys are in “imminent peril,” but Celeste points out she never reported them to child protective services. Celeste gets Mary Louise to admit she only saw her lose her temper once, then asks: “Did you ever lose your temper?” She brings up a time when Mary Louise was driving and her son Raymond died “because you lost your temper” (!). Mary Louise says the question is “obscene” and lets out an anguished gasp, but Celeste insists that these are relevant questions. Perry was five at the time, we learn, and Celeste pointedly asks, “Did you ever blame him for causing the crash?” 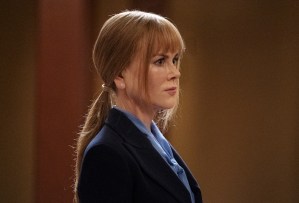 Perry confided in Celeste that his mom always told him he distracted her and caused Raymond’s death, we learn, and Celeste pins her down on whether Mary Louise was abusive as well. Mary Louise fiercely calls her “a liar” and tries to fight back, saying Perry was never abusive — and that Jane was “mistaken” when she accused Perry of rape. It’s all Celeste’s fault for liking violent sex, she says, and tearfully adds, “He’s the victim here. Not you.” Celeste’s answer: playing that iPad video, in which the boys captured Perry brutally attacking Celeste through an open doorway. Afterwards, Madeline congratulates Celeste, but she’s still not sure she’ll win full custody and doubts herself for even allowing Perry’s abuse to continue: “Maybe I’m not a good mother.” Madeline reassures her, though, that nobody’s perfect and encourages her not to falter.

At the aquarium, Jane apologizes to Corey for being distant; she wants him to go out and have fun, but his idea of “fun” is being with her, it turns out. (Awww.) Plus, Celeste celebrates her good day in court, but bristles when her boys ask about her confrontation with Mary Louise: “Did you beat her up?” Speaking of Mary Louise: She charges up to Celeste’s door, accusing Celeste of lying about her abusing Perry as a boy. Perry said it, Celeste insists, but after she locks her door, Mary Louise continues to freak out, yelling, “It’s not fair! It’s not fair!” 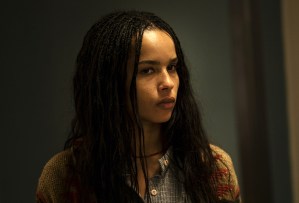 Bonnie sits at her mom’s bedside again, and this time, tells her how much she loves her: “It took me my whole life to say that.” Then she picks up a pillow… but when her dad walks in, we see she’s not actually smothering her mom — she’s just cuddled up next to her in bed. And something must’ve clicked, because the next morning, Bonnie’s mom is awake and asking for breakfast. Hope she doesn’t remember what Bonnie told her, though…

Madeline is busy beating herself up for starting the lie in the first place: “It’s unraveling all of our friendships.” But as Celeste points out, some of those weren’t very raveled to begin with: The real lie, she says “is the friendship.” Madeline thinks her marriage is about to unravel, too, when Ed sits her down and says they were “delusional” when they got married… but surprises her by saying: “We need to renew our vows.” He wants a new start, and so does she. They seal it with a kiss, and Madeline immediately snaps into bridezilla mode, but Ed wants to keep it small and intimate. And she agrees!

Celeste takes her boys to court, dressed in little suits and ties, for the judge’s decision — just as Bonnie’s mom is being wheeled out of her room after suffering what the doctors think is another stroke. The rest of the Monterey Five are there, though, when the judge begins rendering her decision… and Mary Louise interrupts! After seeing that video, she says she “had no idea” and apologizes, but maintains she just wants what’s best for the boys. She tells Celeste she was “complicit” in her own abuse and taunts her about her “social adventures” with other men… all in front of the boys! Celeste gets her turn, and blames Mary Louise for turning Perry into an abusive jerk. Her boys “will be good men,” she declares. Then the judge reveals her decision, denying Mary Louise’s petition and awarding Celeste full custody. Bam!

The boys do give Mary Louise a hug, though, while Bonnie and her dad and daughter gaze at her mom. She’s passed away, we learn, and Nathan offers Bonnie his condolences… but then Bonnie hits him with a gut punch: “I’m not in love with you… I don’t think I’ve ever been.” (Ouch.) Renata returns home to find Gordon still playing with his toys: He got a collector to buy all of them and let him keep them, somehow. Renata is enraged: All her stuff is gone, and Gordon gets to keep his little toy trains? (God, Laura Dern is terrific this season, huh?) She gets revenge by grabbing a baseball bat (!) and smashing his precious train set to pieces, hitting Gordon square in the chest in the process. And when she walks out on him, it feels like it’s for the last time, doesn’t it?

We flash-forward to Madeline and Ed’s vow renewal, with just their daughters with them on a seaside cliff and Madeline wearing an adorable flower crown. As we hear Willie and Paula Nelson’s “Have You Ever Seen the Rain,” we see Jane and Corey dancing close and getting, um, even closer; Renata reassuring Amabella it’ll all be OK; Celeste kissing an old iPad video of Perry; and a glazed-over Bonnie driving off alone into the night. She’s joined by the rest of the Monterey Five as they all walk in together into the police station. Paging Detective Quinlan! Looks like the biggest little lie of all is finally getting atoned for.

Alright, it’s your turn: Grade the Big Little Lies finale in our poll, and then hit the comments to share your instant reactions.