Celeste’s custody battle with Mary Louise went to court this week on Big Little Lies… but there was also a huge confession that took place outside the courtroom.

Right off the bat, Jane confronts Corey about what he was doing down at the police station. He says he’s not a cop; he was just called in for questioning by Detective Quinlan. She grilled him about Perry’s death, but Jane hasn’t told him anything about it. The detective does know about the rape and Ziggy’s parentage, though, and still doesn’t think Perry just fell. She told Corey one of the women is bound to crack soon: “The first one who does gets a break. The other four are f–ked.” Everyone’s under a lot of strain, actually: Madeline snaps at Bonnie during another secret meeting (“Let’s not forget you’re the one who pushed him!”), and Bonnie asks her mom’s doctor if they can’t just mercifully end her life if there’s no hope for recovery: “You’d do it for a dog.” 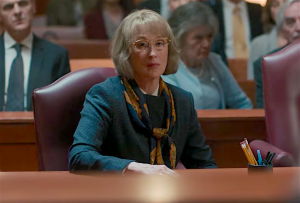 At Celeste’s hearing, the judge says she’s “not satisfied” after reviewing the psychiatric reports and orders Celeste to take the stand to face questioning from her and Mary Louise’s lawyer. And that lawyer wastes no time in hitting her with tough questions, asking about Perry’s physical abuse and adding, “Was it ever thrilling?” The judge allows him to ask very probing questions about her post-Perry sex life; he even displays photos of the several anonymous dudes she’s slept with since then. (She can’t even remember the bartender’s name. Jeff? No, Joe.) Celeste is stricken when she learns one of her boys tried to climb into bed with her, only to be turned away by one of those dudes, and she admits to being “self-destructive” at times. But the lawyer pushes even harder, asking her about hitting the boys, slapping Mary Louise… and maybe pushing Perry down those stairs?

Celeste fiercely denies doing that, but the lawyer shows a computer simulation of Perry’s fall that shows where he would’ve landed if he merely stumbled — which is much different than where he did land. (Oh, and did I mention Detective Quinlan is in the gallery for all of this?) The judge eventually (finally) puts an end to this line of questioning, but Celeste is clearly rattled. (Her lawyer: “That was rougher than we thought.” Renata: “You think?”) Back at home, Celeste steadies her nerves with a few glasses of vodka, while Jane knocks on Mary Louise’s door, demanding she call all of this off. Celeste is struggling, Jane admits, but “who isn’t?” Mary Louise’s reply: “Are you struggling, Jane… with your conscience, perhaps?” She also knows Jane has a gun, and wonders if Jane bought it intending to hunt her son down. Man… she’s a real piece of work, huh? 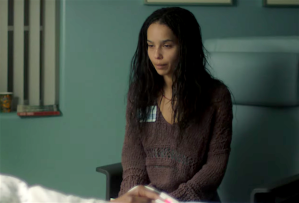 The judge isn’t much easier on Celeste the next day: She pointedly asks her if she has a sex addiction (!) and why she stayed with Perry. When Celeste explains that she loved him and always thought he’d get better — “I stayed to survive. I stayed for my boys.” — that seems to satisfy the judge. But Bonnie’s conscience is still nagging at her. Facing her comatose mom, she opens up her journal, ready to “confess.” She lists off all the reasons she resents her mom: for hitting her, for making her feel so bad about herself that she started having sex at age 13 and settled for marrying Nathan. But she also blames her for giving her the anger that led to her snapping and pushing Perry, and she confesses to the whole thing: “When I lunged at him, I was pushing you. And that push was a long time coming.” (And did we spot a single tear coming out of her mom’s eye?)

Back in court, the judge is ready to make her decision — before Celeste stands up to call a witness: Mary Louise. If Mary Louise wants custody, she should have to face the same scrutiny she did, Celeste reasons… and she wants to be the one who questions her directly. (She is a lawyer, after all.) The judge okays it, and we cut to black, setting up next week’s grand finale: Kidman vs. Streep! Get your front-row seats now!

* I already went off on Celeste’s wildly inappropriate therapist earlier this season, but: Was that the most wildly inappropriate family court hearing you’ve ever seen in your life, or what? All those intimate, irrelevant questions about Celeste’s sex life, asked in front of a full gallery of onlookers… why was this hearing being held in public, anyway? And doesn’t it seem like this is taking an extraordinary number of days for a simple custody dispute?

* Renata got yet another shock this week when her departing nanny Juliette showed up at their bankruptcy hearing asking for severance… and additional money she was promised for providing, um, “stress management” to Gordon. A devastated Renata unloaded on Gordon — Laura Dern may have set a new TV record for number of F-bombs dropped in a 30-second scene — before shoving tissues into his mouth to shut him up. Actually, does Celeste’s therapist have any time to see a new couple, perhaps? 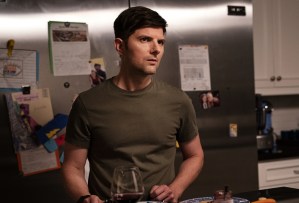 * Bonnie also had a vision of her mom getting up out of her hospital bed and telling her to “go towards the light, baby.” Uh-oh… that, paired with the vision of Bonnie floating lifelessly in water, makes me worried she may not survive next week’s finale.

* So are we back to trusting Corey again, or do we still think he’s hiding something? Also: Maybe he should’ve consulted a lawyer before answering any questions from the cops?

* Are the flashbacks to Perry’s death that begin every episode building up to something, you think? Each seems to offer a tiny sliver of fresh information, but the big picture is still murky at this point.

* Renata always setting off the metal detector at the courthouse really is Season 2’s best running joke, isn’t it?

Got thoughts on tonight’s Big Little Lies? Predictions for the season finale? Drop ’em in a comment below.