Don’t be fooled by the sweet smile and kind eyes on Big Little Lies‘ Corey Brockfield: Just when we were really, really hoping that he would be the well-intentioned guy Jane deserves, Sunday’s episode gave us pause — and a reason to believe he’s not worth trusting, after all.

Of course, he’s not the only Monterey resident who earned a little side-eye from us this week. Let’s revisit the events of “Kill Me” (with a note that our resident BLL recapper, Dave Nemetz, will be back next week):

CELESTE | Just about every woman in the so-called Monterey Five had a crummy week — but hoo boy, Celeste is going through it right about now. First, she and her lawyer, Katie, take a meeting with Mary Louise, her lawyer and the judge overseeing their custody case. Unsurprisingly, Mary Louise kicks things off with a sugary sweet compliment of Celeste — she’s a good person and an even better mother! — then follows it up with, “But she’s unwell,” which the judge deems inappropriate before wrapping up the meeting.

Celeste is annoyed that Katie didn’t fight back harder (or, um, at all) against Mary Louise in that room, but Katie insists that silence is key in this custody battle: Mary Louise will try to get a rise out of Celeste any way she can, and Celeste will look a lot better if she doesn’t take the bait. Celeste eventually comes around to that strategy… but she doesn’t exactly employ it. At the next meeting, Mary Louise’s lawyer makes an offer of joint custody; Celeste will have the twins on weekdays, Mary Louise will get them on weekends, and Celeste will go to treatment for drug and alcohol dependency, plus anger management counseling. Celeste immediately fires off a “f—k you” at her mother-in-law after hearing those terms, then gets angry when Katie admits that the joint custody offer might actually be worth taking.

And that’s when Katie introduces a new wrinkle to the situation: If the custody case goes to court, there’s a strong possibility that Perry’s death will come up — and the entire Monterey Five could be questioned about it if they testify at the custody hearing. Celeste calls an emergency meeting with Madeline, Renata, Bonnie and Jane, and after much debate about how to proceed, Madeline insists they all “stick together,” even if that means potentially perjuring themselves. Meanwhile, Celeste is forced to reveal the ongoing custody battle to her kids, telling them that Mary Louise wants the boys to live with her for a while. They seem heartbroken at the idea of leaving their mom, then sweetly assure her that they’ll say whatever she wants them to say at their court-ordered psychiatric evaluation. 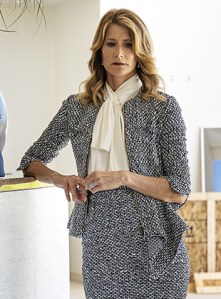 RENATA | Poor Renata continues to put tally marks in the “L” column this week, particularly when she finds out that San Francisco Magazine is no longer including her in their “Women in Power” issue, thanks to the whole bankruptcy thing. She decides to turn her attention to Mary Louise, in an attempt to get Celeste’s mother-in-law to call the whole custody battle off. Oh, Renata, how naive you are.

To absolutely no one’s surprise, Renata’s conversation with Mary Louise goes very, very badly. She tries her best to get the upper hand and discuss the custody battle — but Mary Louise cuts in first, making all sorts of snide remarks about Renata’s bankruptcy woes and her choice to be a working mother who spends less time with Amabella. “Are you judging my life choices?” an appalled Renata asks, to which Mary Louise responds, “I don’t know your choices. I don’t know you,” except for the observation that Renata lives “in a big house with no furniture.” Ugh, this woman. (The conversation seems to linger with Renata, though, seeing as she keeps Amabella home from school a few days later so they can have a mommy-daughter afternoon.)

BONNIE | At the hospital, Bonnie takes a damp washcloth and cleans her mother’s arms — and when she holds the woman’s hand for a few seconds, she starts to see a few glimpses of those water images that her mom was visualizing before the stroke. (Needless to say, she lets go of the hand pretty quickly.)

Later, Bonnie’s dad interrupts one of the classes she’s teaching (singing for sleep apnea!) and insists that Bonnie’s mom be moved to a different hospital, since the one she’s currently at is just going to toss her in some rehab clinic. “Look at you getting involved. Wow,” Bonnie deadpans, and it’s clear she’s not just talking about the present-day events. Her dad is miffed, insisting that he did get involved when Bonnie was younger and protected her from her mother’s physical abuse. But she reminds him that he merely kept the peace and defused situations when he had to — and that wasn’t protection, even if he thought it was.

That night, Bonnie returns to the hospital to check on her mom, and Elizabeth is awake, struggling to speak. Eventually, she does get two words out, and they’re rather alarming for Bonnie to hear: “Kill me.” (?!?!) Looking a bit queasy, Bonnie leaves the hospital, but she encounters something equally worrying on her way home. Corey, Jane’s boyfriend, walks out of the police department and gets into his car, looking rather shifty — not that that’s totally unusual for him. 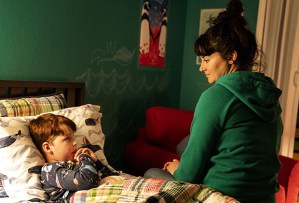 JANE | Ziggy gets bullied by some punk at school named Brian Macpherson, who calls Ziggy a “mistake” and a “p—sy boy,” among other unsavory names. Celeste’s sons try to put a stop to it, telling Brian to “leave our brother alone” (aw!), but Brian calls the twins’ father a rapist, and they beat the crud out of Brian against the playground fence. He ends up with a busted lip and a stay at the hospital, and he, Ziggy and the twins all get suspended from school for three days.

Ziggy reveals to Jane that Brian called his dad a rapist, and he wonders aloud if he’s going to end up just like his father, though Jane assures him he could never. To lift his spirits, she takes Ziggy kayaking with Celeste and the twins during one of their suspension days, and Corey is also there, playing with the kids like a bona fide father figure. Earlier in the hour, though, Jane and Corey had their own issue: They made out a bit and started to take off some clothes, but seconds after Jane begged Corey to “touch me, please,” she burst into sobs, bringing the action to a swift end. Corey was very nice about the whole thing — but his visit to the police department makes me wonder if Jane dodged a bullet altogether by not sleeping with him. (I’d really like to believe he was there for a totally different reason. Theorize in the comments!)

MADELINE | Last but not least, Sunday’s episode goes a little deeper into Madeline and Ed’s marital woes, beginning with their long-awaited trip to a “healing institute” in Big Sur. Madeline encourages Ed to be open-minded about the whole thing — but it turns out the retreat is a bust, full of hippy-dippy exercises like walking around in a circle (er, sorry, “exploring the space”) and hugging a bunch. Pass!

On the way home, Ed finally opens up to his wife, revealing that their first date felt like a job interview for the position of “father figure” to Madeline’s first daughter. He insists that he was always a “sound, practical choice” for Madeline to make. And he was cool with that. Until she got it on with Joseph Bachman, leaving Ed with “the most difficult choice of all: to walk out with my dignity, or to stay with a woman who I simply cannot trust.” In response, Madeline gives a monologue of her own, at a loss to explain why she makes such self-destructive choices; she does, however, give Ed her word that her next screw-up will not be infidelity. “All of my mistakes will be brand-new ones,” she assures him, and he seems a bit more convinced than he has for the last two weeks. (Side note: Big Little Lies seems to be the rare show where child actors make scenes better, no? Later in this episode, Chloe finds Ed chopping vegetables at the kitchen counter, and she smiles at the return to normalcy, then hugs him, and he hugs her back and cries, and I’m verklempt, OK?!)

But it seems Madeline and Ed’s issues aren’t fully behind them. At the end of the hour, Ed goes to a bar, and he’s suddenly joined by Tori Bachman, Joseph’s wife. She awkwardly (or flirtatiously, I suppose) tugs at Ed’s jacket collar and strokes his shoulder — but then she pointedly looks over at the corner of the bar, and Ed turns to find Joseph sitting at a nearby table, watching both of them.

Your turn! What did you think of Big Little Lies‘ latest outing? Drop a comment below.