The Big Little Lies ladies all slapped on a smile for Amabella’s disco birthday party… and that wasn’t the only slapping going on.

At a pre-Halloween pumpkin carving party at Madeline’s, Mary Louise shows up uninvited and dotes on Ziggy, tickling him and complimenting his pumpkin art. She also casually mentions that she’s moving… into Jane’s apartment complex! Celeste pulls her aside and firmly asks her to respect everyone’s “boundaries,” but Mary Louise brushes that off. In fact, she’s still not convinced that Jane was a victim in her encounter with Perry, and wonders how many more women there were that Celeste didn’t know about — and Celeste slaps her across the face hard, knocking her glasses clean off. Mary Louise is unfazed, though. As she recovers, she asks, “What should we call that: foreplay?” (It’s here that I needed to pause for a minute to pick my jaw up off the floor.) 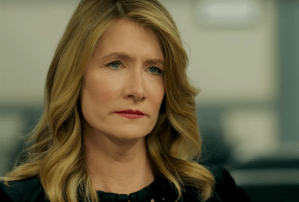 Renata’s not having a much better week: She heads to bankruptcy court with Gordon, where a humorless trustee reads off their assets (a condo in Aspen, a yacht named “Amabella”) and a whopping $33 million in liabilities. They’ll have to sell their home, and Renata visibly bristles when the trustee asks if Gordon is expecting an inheritance: “Parents in good health?” He also inquires about a $4,200 charge that Renata says is “medical”… before admitting it was for Botox. She has to hand over her wedding ring, and (in a final humiliation) they have to catch a ride home with their lawyer after turning in the Tesla. Renata insists she’s stuffing down all this anger for now, though, to make Amabella’s birthday the happiest damn day anyone’s ever seen.

And she does, with a crazy elaborate disco-themed blowout at her house, greeting everyone with a manic smile, pretending that everything’s just great. As Ed points out, everyone’s pretending at this party: He and Madeline are pretending like they’re happily married, Bonnie’s pretending that she’s not still thinking about Perry’s death (her mom picks up that “something’s wrong” and tries to lay hands on her in some kind of voodoo mind-meld) and Renata’s pretending like she’s not about to go totally broke. Gazing at Amabella happily dancing with a boy, she complains to Gordon that “all my dreams have gone to s–t” — and then snaps right back into happy hostess mode once she spots a new arrival. (Really, the instant emotional transition Laura Dern does here is frighteningly impressive.) 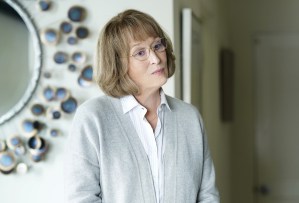 But serious storm clouds are gathering on the horizon. While everyone else is boogieing on down, Mary Louise is meeting with a family law attorney — hi, Denis O’Hare! — who’s helping her prepare a petition for custody (!) of Celeste’s boys. (He advises her to call the other top attorneys in the area, too, so Celeste won’t be able to retain them, and warns her that this move will surely alienate her from the boys, at least temporarily.) And as Bonnie and her mom are leaving the disco party, Bonnie’s mom suddenly goes pale and collapses to the floor. She’s rushed to the hospital, where the doctor tells Bonnie she had a seizure and needs to go into surgery. A rattled Bonnie even spots Detective Quinlan at the hospital and angrily accuses her of stalking her… but it turns out she’s just there on another case. Oops.

Celeste does apologize to Mary Louise for that slap… but she also brings home a flirty bartender for a one-night stand while the boys are out eating pizza with Mary Louise. When she brings them home the next morning, Celeste seems dazed and loopy… and the bartender sheepishly walks out without a shirt on before making a quick exit. Celeste claims she didn’t even remember he was still there (Ambien, again), but Mary Louise tells her she’s “a mess” and offers to take the boys in with her while she gets her head on straight. An infuriated Celeste refuses and orders her to leave, but before she does, Mary Louise hands her the petition for custody she’s filing in court: “We need to do what’s best for the boys.”

Jane knocks on Mary Louise’s door — she’s right in the same building! — demanding to know if she’ll take Ziggy next, but Mary Louise says of course not, because Jane is “a wonderful, wonderful mother.” She admits she has “concerns” about Celeste, though, and all the pills she’s taking. (See? She was collecting evidence!) She pointedly asks Jane if she’s comfortable with Ziggy in the car when Celeste is driving. Celeste vents to her therapist, who tells her that she’s seen custody battles like these, and “no one wins.” And Bonnie’s mom briefly emerges from her coma, looking disturbed — and seeing (gulp) a vision of Bonnie floating lifelessly in a body of water.

* Ed continued to sulk about Madeline’s infidelity, ignoring her idea to go to a couples retreat in Big Sur and nearly getting into a fist fight with Nathan at Amabella’s party. Madeline finally asked him to just leave her already if he can’t forgive her. Ed claimed he’s still here, but she shot back that he’s “far from here. You’re not even f–king close.” And she kind of has a point, right? There’s only so long he can punish her before he needs to make a decision: fix it or move on.

* Celeste said that Perry told her about Mary Louise’s husband leaving her after “the accident” and starting a new family. Hmmm… which “accident” was that, exactly? She’s clearly not referring to Perry’s death. Could it be… whatever happened to Perry’s brother? Mary Louise said she still blames herself for whatever it was.

* Corey continued to be the perfect (albeit weird) boyfriend this week, joining Jane at the disco party and squeezing her hand tenderly when she finally told him about the rape. And bonus: His hair already looks like it’s from the ’70s!

* Bonnie also had a weird fight with her dad, when he seemed to accuse Bonnie of saying something that would have triggered her mom’s seizure. She cursed him out and stormed off. Seems like there are some unresolved issues there, no?

* Guys, I’m still worried about Amabella. She seemed to be having fun at her birthday party, but she looked sad and isolated at the pumpkin carving. Is she still (understandably) uncomfortable around Celeste’s sons?

* Plenty of contenders for the week’s best quote, but I liked the exchange between Madeline and Renata when Madeline was smoking outside during the pumpkin carving. Madeline: “I hate smoking.” Renata: “Nobody smokes anymore.” Madeline: “I’m just trying to manage my stress.”

Got thoughts on tonight’s Big Little Lies? Drop ’em in a comment below.