Need to catch up? Check out our previous Big Little Lies recap here.

The kids on Big Little Lies were worried about the fate of our planet this week, but there were plenty of more local concerns to keep the adults busy.

During a second-grade class reading of Charlotte’s Web — with the teacher reminding the kids that it takes a thousand gallons of water to produce a single pound of sausage — Renata’s daughter Amabella collapses in the coatroom. She’s rushed to the hospital, where a frantic Renata is told the little girl suffered an anxiety attack. The doctor quickly senses that things aren’t great at home when Renata snaps at Gordon for daring to talk to his daughter, and suggests that “counseling is certainly indicated… perhaps for the entire family.” Yeah, Renata doesn’t appreciate that suggestion, either.

She does hire a weird lady in a Little Bo Peep costume (hi, Kerri Kenney!) to talk with Amabella, and the lady reports back that the girl is stressed out about the planet dying because her teacher is always talking about climate change. She adds that Amabella’s also worried about her dad going to jail and her mom’s general mental state, but Renata blows right past that and confronts the school principal, berating him for filling their kids’ heads with scary visions of an ecological apocalypse. She thinks the principal is ignoring her because of her financial difficulties — “I will be rich again. I will rise up. I will buy a f–king polar bear for every kid in this school” — but he agrees to hold a school-wide assembly to address the parents’ concerns. (And whoo boy, do they have some.) 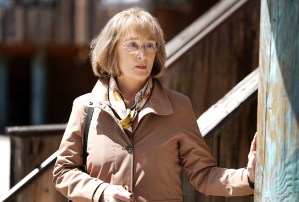 Meanwhile, Mary Louise has set her meddling sights on Jane: She drops in on Jane at work and bluntly asks her to take a paternity test for Ziggy. She’s clearly in denial about Perry being a cheater and a rapist — she lowers her voice to even utter that word — and Jane refuses, but later, Mary Louise is lurking in a parking lot, spying on Jane and Ziggy. Seeing Ziggy in the flesh seems to convince Mary Louise that he’s Perry’s son, and she shares childhood photos of Perry and his brother with Jane that do look an awful lot like Ziggy. She still remembers Perry as a “gentle,” “tender” boy, though, and Jane has to abruptly inform her: “He grew up to be neither.” (It is heartbreaking to see Mary Louise grasping at straws, practically begging Jane to say that she saw some good in Perry… her rapist!)

Madeline and Ed, still deeply estranged after last week’s cheating revelation, have a session with Celeste’s therapist, who pegs Ed as “profoundly disengaged” and needles Madeline about her own parents’ marriage. (As a kid, Madeline walked in on her dad with another woman, she confesses to Celeste, which taught her that marriage was “not to be trusted.”) Madeline is further wounded when she finds Ed having coffee and laughing it up with Bonnie (!), and Ed admits he’s happy to annoy Madeline and Nathan at the same time. So Madeline is already highly fragile when she’s called up to speak at the school assembly, and she starts rambling about the Muppets song “The Rainbow Connection” and how “there aren’t a lot of happy endings” in life before bursting into tears. 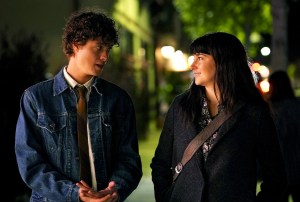 There is some positive romantic news, though: Jane goes out on a date with Corey, that awkward co-worker of hers, and they seem to have a nice time… until he leans in for a kiss, and she pulls back so far, she almost stumbles in front of an oncoming bus. She’s still wary after her encounter with Perry, but he’s happy to give Jane all the time she needs, even volunteering to teach Ziggy how to surf. Next time, they settle on a hug… and as he holds Jane tight and sways back and forth slowly, we actually see her letting down her guard for once. (She even sheds a tear.) Maybe there’s a happy ending brewing here — although knowing this show, probably not, right?

* Bonnie’s definitely got some skeletons in her closet: We saw her flash back to a traumatic childhood moment when her mom forcefully shoved her under the water when she was afraid to swim, and then in a chat with Jane, she mused that “Nathan has no idea who I am.” What’s she hiding, exactly? 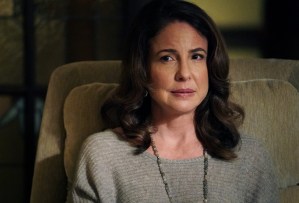 * Is it just me, or is Celeste’s therapist just way too confrontational? She aggressively pushed Madeline on not going to college, and then pushed Celeste to admit she’s self-harming to fill the void Perry left. Whatever happened to the passive, “And how does that make you feel?” style of therapy?

* Mary Louise also paid a visit to Detective Quinlan, hoping for an update on Perry’s case, and she suspects that Quinlan doesn’t think Perry just slipped, either. Plus, she snooped through Celeste’s pill drawer and chided her about abusing opioids. Mary Louise isn’t just a busybody; she’s collecting evidence!

* Celeste is still pining for Perry, convinced that having him around made her a better mom and, um, pleasuring herself to old Skype videos of him in bed. But didn’t we see a flash of her in some other dude’s arms right before she wrecked her car? Hmmm.

* Madeline is definitely going back to get her college degree, right? (Abigail remembers her watching The Wizard of Oz and tearing up when the Scarecrow got his diploma.) They could even enroll together! Legally Blonde 3, anyone?

Got thoughts on tonight’s Big Little Lies? Drop ’em in a comment below.