This post is only for those who’ve already watched the Season 4 finale of Veronica Mars. Spoilers abound. You’ve been warned…

In the end, the “epic” love story of Veronica Mars’ titular heroine and Logan Echolls certainly spanned years and continents, with at least one life ruined. And bloodshed? Yeah, there was a bit of that, too… courtesy of the bomb that killed Jason Dohring’s character at the end of the Season 4 finale.

The bum-fight-organizer-turned-Naval-intelligence-officer met his maker thanks to an explosive device planted by Patton Oswalt’s Penn Epner, a disgruntled pizza-delivery guy who’d tormented Neptune Spring Breakers with similar blasts during the city’s most profitable month. 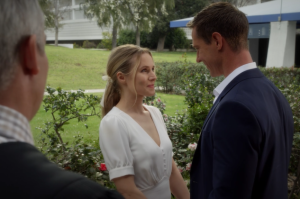 The worst part: Logan died just hours after he and Veronica finally got married, tying the knot at city hall, with Keith and Wallace in attendance. As the newlyweds packed for an impromptu honeymoon in Sedona, Logan realized that Veronica’s car needed to be moved to accommodate the street cleaners. And as he went downstairs and got into the automobile, Veronica realized that Penn’s backpack was still in her backseat… and it likely included a bomb.

She frantically ran to the window to warn her new husband, but it was too late: The car exploded, knocking her down and killing Logan. (For a full recap of the episode, go here.)

Marshmallows, are you as devastated as we are? Hit the comments to pay your respects to the late, great, immolated Logan Echolls.