Before we get into the premiere recap for Season 4, a bit of a disclaimer: I’m a huge Marshmallow who could not wait to see my favorite female sleuth in action again. I have zero chill when it comes to wanting to see Kristen Bell play this part for eternity. I’m a LoVe ‘shipper born on that moment on the Camelot balcony. And I always, always take Backup.

Bottom line, I really, really love the tiny blonde one. So with that out of the way, let’s recap “Spring Break Forever.” 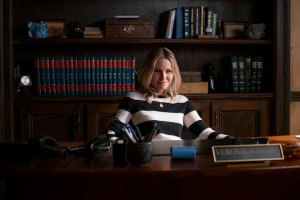 WHAT A BLAST | Veronica voiceovers that she’d been away from her hometown for 10 years before she decided that “Neptune needed me, and I needed it.” However, “I was wrong on both counts. Neptune didn’t need another private investigator. It needed an enema.” Alrighty, then! We see her at night, brow furrowed as she stands outside a police-tape cordon at an oceanfront motel called the Sea Sprite. Still via voiceover, she explains that there was a bombing at the facility during Spring Break — the busiest and most profitable time of year in Neptune — and then we jump back to two days before the event.

Veronica is helping an oblivious rich woman (hi, Happy Endings‘ Eliza Coupe) figure out exactly how her ex-husband is remotely manipulating the temperature, audio system, etc. in her posh, modern, highly-controlled-by-smart-devices pad. Veronica handily destroys the Internet router and various picture frames until she finds hidden cameras, then proves her expertise by demonstrating how she has bugged the ex’s house with cameras and microphones of her own. As Veronica’s client watches, impressed, Ms. Mars taps a few buttons on her phone and then some loud yodeling interrupts the ex as he has a tryst in the kitchen with his new, young wife. But then the client is super dismissive of Veronica as she goes to leave… so our girl charges her a ton more originally agreed upon, and the ridiculous woman barely notices. Aww yeah. 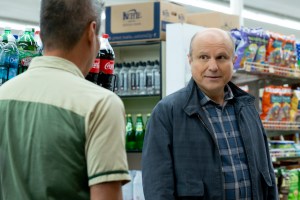 DADDY-DAUGHTER TIME | Meanwhile, Keith is at Hu’s Reduced, the local discount grocery store, which is losing customers due to a perceived rat problem. Thing is, Mr. Hu explains, an exterminator has determined that the store doesn’t actually have rats — and Keith posits that maybe someone is sabotaging them. Two things of note here: Keith has a momentary memory lapse (that will become more important later), and Papa Mars also replaces the word “f–k” with the word “cuss,” which draws a confused look from Mr. Hu. “My daughter and I have a bet who can go the longest without dropping an F-bomb” Keith explains. “I didn’t think she could go 20 minutes, and that was three months ago.” (So that’s how the show got around Hulu’s mandate.)

Back at Mars Investigations, Keith is impressed with how much Veronica managed to get out of the tormented ex-wife. “Feeling emasculated? Is that it?” V teases him. “Honey, if feeling emasculated by my daughter was going to dampen my spirits, you would’ve found me out in the garage a long time ago. Cheap Trick in the tape deck, tube in the tail pipe,” he jokes. “What’s a tape deck?” she asks, an impish look on her face. “I hate you,” he replies. I HAVE MISSED THESE TWO SO MUCH. 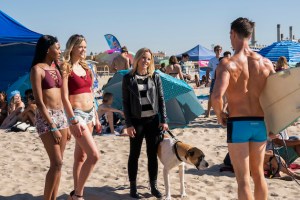 AND THEN THEY CUSS | Veronica returns to her cozy oceanside apartment and snuggles her dog, Pony, for a minute before she notices a duffel bag on the ground. “Daddy’s home?” she says, surprised in the best way. And when she takes the pooch out for a walk on the beach, we see that Daddy — Logan, dressed in tiny blue swim trunks and emerging from the water like a surfboard-toting Triton dripping with muscles, is indeed back from duty as a Naval intelligence officer. Two young ladies nearby are vocally appreciative, so Veronica decides to mess with them. “What, that guy?” she says, scoffing. “Eh, I’ve seen better.” Then she calls him over and pretends to negotiate a deal in which he’ll move a refrigerator into her apartment in exchange for sex — Logan, of course, plays along — and the pair walk off together while the girls gape. “I’m gonna cuss your brains out,” Veronica whispers to her man as they tread back home.

Once inside, that’s exactly what happens. The minute they close the door behind them, Logan twirls Veronica around like they’re dancing, and that tiny move is so reminiscent of all of Jason Dohring’s random hand flourishes and such in the first season that my heart swells. They start going at it, and it is HOT. Later, they’re giggling and cuddly in the kitchen — important PSA here: Shirtless Logan is so cut, I fear that Veronica may scrape herself on the glorious expanse of his abs — and she waits until he’s brushing his teeth to start poking around his luggage, trying to deduce where he was stationed. “There’s sand in your bag! I knew you were in the Middle East,” she says; he confirms nothing. Then he starts joking about how she should lock him down. “Let’s get married,” he calls from the bathroom. She huffs out a laugh. “I’m serious,” he continues, but she says there’d be a ring if he actually meant to propose. “How many pockets have you searched?” he says, still in the other room so he can’t see the shock, horror and disbelief washing over her face.

She finds the engagement ring in the pocket on the right, exactly where he said it would be, and then he joins her in the living room. “WTC, dude?” she says, clearly not happy, but he soldiers on, crouching down on one knee. He starts to pop the question, and she switches into full-on panic mode. “Don’t, please. We’re not getting married. I thought we were on the same page about that,” she stammers, citing both of their parents’ relationships as cautionary tales. He’s crestfallen at her refusal, and she also can’t deal with THAT, so she makes an excuse that she has to meet Keith at a city council meeting and skedaddles while he’s still down on one knee. I love you, Veronica, but that is Messed Up.

Every Veronica Mars Episode (Plus the Movie) 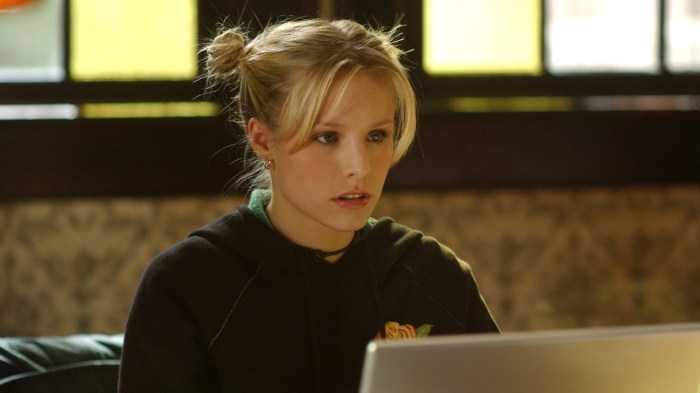 TOWN STRIFE | There’s a lot that goes on at the city council meeting, but here’s the gist: Big Dick Casablancas — aka dad to Logan’s pal Dick Casablancas and the deceased (and terrible) Cassidy “Don’t Call Me Beaver” Casablancas — is the head of a group called Neptune United for a Tidy Town, or NUTT, which he says wants to “return Neptune to its former glory.” NUTT is urging the council to pass beautification ordinances that will get the town “back to a better time.” But business owners like Nicole (hi, The Good Place‘s Kirby Howell-Baptiste!), who owns a bar called Comrade Quack’s — tagline: Get Your Duck Wet — points out that the beautification ordinances are actually intended to squeeze out businesses like hers that make their yearly income off the Spring Break bacchanalia.

“How the hell did we allow a crooked real estate tycoon come in here and seduce us into longing for a bygone era?” Veronica whispers to her dad. (Ha!) “An era that never existed,” Keith responds, pointing out that Neptune was a polluted mess 20 years ago. Then there’s this highly entertaining father-daughter back-and-forth: 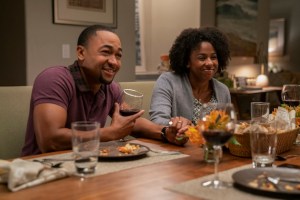 YAY, WALLACE! | Allow me to introduce you to a few people we’re going to get to know better over the next eight hours. First, there’s Gabriel, a nerdy guy who’s doing Spring Break with his fellow nerdy guys and staying at the Sea Sprite. Then there’s Alex, the rich, college-age brother of an Arab-American United States congressman; Alex is engaged to a woman his family doesn’t like very much. Matty is the whipsmart teen daughter of the Sea Sprite’s owner (hi, Playing House‘s Brad Morris), who lives at the motel with her dad. And Penn Epner (hi, A.P. Bio‘s Patton Oswalt) is the middle-aged pizza guy who delivers to the jerky kids partying at the motel.

I tell you about them because when a bomb goes off in the Sea Sprite’s lobby, they’re all affected. Four people die in the blast, among them the motel’s owner, Gabriel and Alex’s fiancée. Matty and Penn, who are outside when the device is detonated, are hurt but not killed. Veronica learns all of this when her father calls her as she’s heading into dinner at Wallace’s house. Her high school bestie now has a wife and very cute baby son, with whom Logan is playing when she comes inside. “Oh, hell no,” Veronica says to herself. But it seems like Logan is handling her rejection well. He’s pleasant and engaged at dinner — much more than she is, which reminds me how sometimes Veronica is a really crappy friend — and doesn’t support it when she tries to bail right after the meal.

Also important for later: Gabriel was the nephew of a Mexican drug lord called El Despiadado, and when his ex-wife (hi, Girlfriend’s Guide to Divorce‘s Alanna Ubach!) demands that he do something about the murder, the cartel head orders two henchmen named Alonzo (hi, Westworld‘s Clifton Collins!) and Dodie (hi, Gilmore Girls: A Year in the Life‘s Frank Gallegos!) to bring him the head of the person responsible. 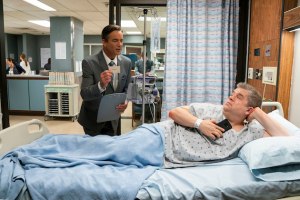 WOO-HOO CLIFF! | The bomb victims are taken to the hospital. That’s where police chief Marcia Langdon (hi, A Different World‘s Dawnn Lewis!) and her officers question Alex’s family, which includes his politician brother Daniel and their very judgmental mother. The Maloofs’ lack of confidence in Neptune’s police lead them to seek out a private investigator to delve into the case — and would you look at that? Cliff (yay!) is right there with a recommendation that the Maloofs contact the Mars family. It’s a big-ticket investigation, and Keith and Veronica definitely accept the job.

Then we’re back to where the episode started, with Veronica outside the Sea Sprite. Keith comes over and wonders how Logan is taking the rejected marriage proposal. “Magnanimously,” she answers, adding that he’s acting like an emotionally mature adult. Not too bad for the former obligatory psychotic jackass, eh? 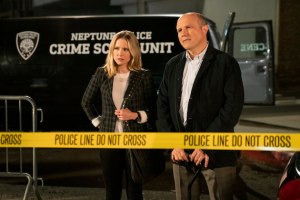 Across the way, Penn is doing an interview with a news crew, and Matty is walking among the blackened ruins of the lobby and parking lot. Veronica watches her intently. “The Sea Sprite bombing,” she voiceovers. “I like to think I would’ve walked away if we didn’t need the money. Knowing what I know now, I wish I had. But there was a girl. And I started to care about the girl. And if you know anything about what I do, that’s never good.”

Your turn, Marshmallows! Grade the premiere via the poll below, then hit the comments with every single thought you have about the revival’s first episode!