Sure, Sweetbitter‘s Tess passed her trails and got hired at 22W. And she’s so much more knowledgeable about wine and napkin-folding than she was a month ago! But she’s still got a lot to learn about… pretty much everything else, as the double-episode Season 2 premiere shows us.

The first episode, “The Pork Special,” finds the restaurant’s hungover crew shipped out to New Jersey. “I think I forgot there’s a whole world outside the city,” Tess marvels as they arrive at a farm, though the rest of her co-workers are far less enthusiastic about the early morning field trip. Howard, who has summoned them, appears in boots and (his version of) work clothes and announces, “This is where our food comes from.” He wants them to be more knowledgeable about the restaurant’s sourcing, he adds, because “the more you know about the food, the more you can sell it.” 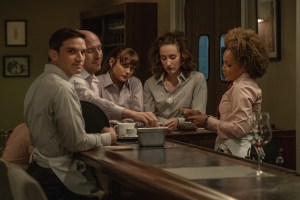 He trots in a pig, and while they’re all oohing and aahing over the farm animal, another man uses a farm implement to stun the pig so it falls over dead (or nearly). The 22W servers recoil in horror as the animal is strung up and its throat is slit. Will goes outside to puke, and nearly everyone else follows him. Only Tess sticks around, riveted. “Holy f–k!” she proclaims.

At family meal that night, Tess calls the pig’s death “definitely the most real thing I’ve ever seen.” And I know that she’s a wide-eyed innocent, guys, but I can’t help wanting her to SHUT UP RIGHT NOW PLEASE. Sasha is back at work because he needs to make rent, but he’s not fully healed from his so-called fall last season. When Tess sees Howard interviewing a pretty blonde, she wonders aloud whether he added her to the staff just because of her looks. Will blurts out that Howard definitely wants her there — even though Simone doesn’t, and didn’t defend her after her trails — and repeats his warning to steer clear of Simone, who only cares about Jake. 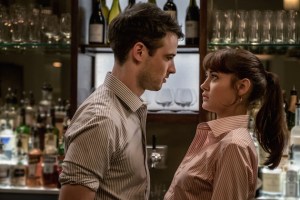 Speaking of Jake: When Tess confronts him about bailing on her after kissing her, he rather grossly replies, “If I wanted you, I would’ve f–ked you that night on the street. I don’t want you. You’re not my type. You’re a little girl.” Charming.

At the end of the night, Howard tells Simone he’s “ready for some changes around here,” then goes home to Becky (remember her? The hostess who flipped out during dinner service?), whom he’s still seeing. During after-work drinks, Simone tells Tess she really cares about her. The older woman invites her out to a bathhouse, where Simone vows that she’s not going to underestimate Tess. Emboldened, Tess looks around at the nude women in the sauna with her, pushes her towel down to bare her torso, and breathes deeply.

By the start of Episode 2, “Equifax & Experian,” Jake already has slept with 22W’s new hostess. But when Howard mentions that he’s changing company policy and that employees must report their relationships to management, the bartender merely smirks and says he has “nothing intimate to disclose.” 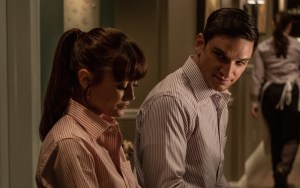 Tess, meanwhile, goes to get a credit card and learns that her deadbeat mother has ruined her credit score by maxing out cards in her name. Tess channels her anger at this development into trying to reorganize the restaurant’s wine cellar (doesn’t she have tables?!) and snapping at her coworkers when they try to help. “Letting people in isn’t the same as being weak,” Simone gently tells her, calling her brave and promising that the credit situation is “fixable” if she’ll only acquiesce to some support.

So, on Tess’ behalf, Simone calls a hotshot lawyer who happens to be a 22W regular, and he agrees to help. After work, Tess’ colleagues gift her with an ugly blazer from the lost and found (she’d wanted the credit card to buy a leather jacket) then share their own horror stories about their moms.

Now it’s your turn. What did you think about the supersized season premiere? Grade the episodes via the polls below, then hit the comments with your thoughts!