Sweetbitter‘s Season 1 finale, which aired Sunday, conveniently coincided with the end of its protagonist’s trial period at the restaurant. But did she earn her stripes and nab a backwaiter position at 22W?

Short answer: Yes, though Tess’ path to gainful employment was by no means a slam-dunk.

Leading up to the test that would determine whether she was hired or ushered out the door, Tess managed to witness some major weirdness between Simone and Jake. (Might it have something to do with the fact that Simone is sleeping with Fred, the soigne husband of her friend/former co-worker Serena? And that Jake nearly beat the heck out of him right there in the restaurant. Yes, it might.) Tess also happened to fall down the stairs at the restaurant, which left her banged-up but able to stick out the day. 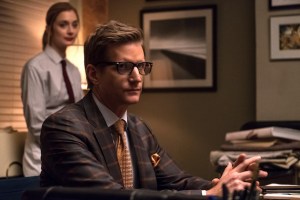 In the end, Tess did not pass her written exam, but Will said that she’d be fine after a little more training. And though Simone voted to oust the wide-eyed newcomer, Howard decided to bring her on to the team officially. Yay, right? Well, we’ll see; Simone gave Tess some rather cryptic advice (“Be careful”), and we’re pretty sure she wasn’t just talking about the stairs

Now it’s your turn. What did you think of Sweetbitter‘s finale, and the season overall? Grade both via the polls below, then hit the comments!