Everwood creator Greg Berlanti and showrunner Rina Mimoun are paying their respects to the late Stephanie Niznik, whose death was first reported on Friday. In a joint statement, the executive producers remember the actress as an “incredible friend” and a “nurturing mother figure” on the set of the beloved WB drama.

“Everwood was more than a television show. It was a family,” the statement reads. “We recently lost the mother of our tribe, Stephanie Niznik. Stephanie played Nina, the next door neighbor to Andy Brown, and the woman who helped raise his children as he struggled with being a single father. She continued that role offscreen by being an incredible friend, a nurturing mother figure to our younger cast members and an artist who brought warmth, compassion and humor to every episode and our set. Everyone who was lucky enough to know and work with her will miss her dearly.” 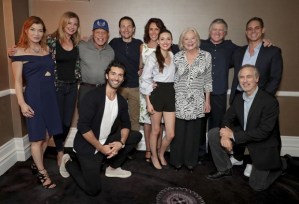 Berlanti and Mimoun’s tribute follows similar acknowledgments by some of Niznik’s co-stars, including Scott Wolf (who played Nina’s longtime boyfriend Jake) and Vivien Cardone (who played Andy’s daughter Delia), which you can read here. The EPs were last reunited with the Everwood cast at a 15th anniversary panel in 2017.

Niznik was just 52 when she died unexpectedly in Encino, Calif. on June 23. A cause of death has not been disclosed.