The Waterford household (past and present!) goes on a trip to Washington, D.C., in this week’s The Handmaid’s Tale, which gives us the answers to these tantalizing queries:

* What, exactly, would the United States’ capital look like if Nazis took over?

* What is an even more horrifying way to enslave women than the methods we’ve previously seen?

Read on for the highlights of “Household.” (And make sure to read our mini oral history with Elisabeth Moss, Yvonne Strahovski and executive producer Warren Littlefield about the episode.)

A CAPITAL IDEA | June walks by a bunch of marthas, kneeling in the snow and praying for Nichole’s return, on her way home from whatever mind-numbing task she’s been doing. The site comforts June. “If they’re praying, then she’s still safe,” she voiceovers. “I pray that their prayers go unanswered.” She also prays that Serena will find her way back and will get Fred to stop trying to reclaim the baby, “or may they both get hit by a f—king truck. I’m honestly down for either.” (Heh.)

At home, Lawrence instructs June to pack, because the Waterfords want to borrow her for a week of public prayer in D.C. Fred has orchestrated a big media shebang to exert pressure on Canada to give Nichole back, and having his whole household there is important for optics. June perks up slightly upon learning that Serena will be in attendance, as well, and goes upstairs to get her things together.

June, of course, doesn’t ride with her former commander and mistress during the trip. She and Aunt Lydia are relegated to a separate car; while the older woman is sleeping, June pulls back the red curtains covering her window and is shocked to see that Gilead’s holier-than-thou Powers That Be have transformed the Washington Monument from an obelisk into a cross. Similarly, the new train station is dark and looks like something straight out of Soviet Russia. June muses that the old one, Union Station, was so beautiful. “It was designed by a heretic,” Lydia chirps, adding that the building was destroyed for the greater good. (Side note: That seems rather short-sighted for Gilead, no? Why not just powerwash the place with holy water, string up a bunch of crosses and use what you’ve got rather than rebuilding such a massive — and pivotal — transportation hub from scratch?)

A giddy Aunt Lydia prattles on that she’s “pumped,” and asks June if she feels the same way. June, who’s busy noticing that the local handmaids wear red scarves around their mouths in addition to the regular uniform, absently replies, “Oh yeah. I’m pumped, Aunt Lydia.” 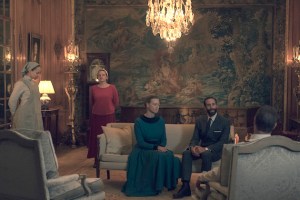 MEET THE WINSLOWS | The Waterfords retrieve June from what amounts to a human baggage claim (keep it classy, Gilead), and Rita and June quietly say they miss each other. But Rita is a little more #TeamSerena than she used to be, and June picks up on it when Rita mentions that having a baby is “the only thing she ever wanted” and seems a little irked that June is so against a reunion.

They’re driven to a grand home belonging to High Commander Winslow and his wife, Olivia. Fred has heard the family is “very down to earth” and sees the visit as “an opportunity.” Serena gives him the eyebrow. “For whom?” she wonders. “Us. All of us. Nichole,” Fred sputters, trying to land on an answer that will de-incense his wife. When they finally meet George Winslow (hi, Christopher Meloni!), things are a little awkward — when the high commander reminds Fred that Gilead has to be “judicious about the images we release to the world, it almost sounds like Fred has already messed up even though nothing has happened yet — but the weirdness is broken when Winslow’s children race in to say goodnight.

There are roughly 300 of them (OK, closer to six, but STILL), and Fred and Serena are taken aback by the sheer number of little ones that flood into the study. Olivia Winslow (hi, Elizabeth Reaser!) follows, holding the youngest, whom she passes to Serena. Serena, of course, immediately starts salivating over the infant. While all of this is happening, June and Rita slip out, unnoticed. June’s surprise over seeing so many kids in one family — remember, most commanders are lucky to have one child — is quickly eclipsed by her horror at finding out what’s underneath the D.C. handmaids’ mouth coverings. When she wonders why the Winslows’ handmaid is so quiet, the woman removes her scarf and reveals that three metal rings are holding her mouth closed. The visual, like the thinking behind it, is horrifying. 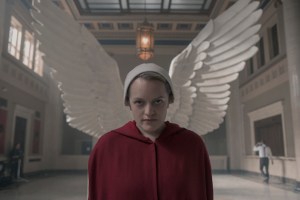 JUNE’S INTERNATIONAL INCIDENT | The next morning, Fred, Serena, June and a few local handmaids are practicing for the giant media moment that’ll take place later on. Nick surprises everyone by stopping by; he’s still heading out to the front in Chicago soon, but hasn’t gotten his orders yet. “Would you mind standing in for me? Just for this shot?” Fred asks. C’mon, Commander, we know that you know that Nick doesn’t mind stepping in for you — in pretty much any situation. Nick takes his place next to June and whispers, “Nice girl like you in a place like this?” She lights up, smiling as they surreptitiously touch hands.

Back at the Winslow home, Serena and June watch the children play. “Serena, I know you don’t want this,” June says, seizing the opportunity to try to change her mind about getting Nichole back. Mrs. Waterford replies that seeing the baby “changed everything for me,” and they’re both crying a little as June points out that “seeing her changed you. It didn’t change this place. She deserves better. Our girl deserves better. And I know you know that.” Before anything else can be said, Fred arrives to announce that the Swiss have agreed to act as a neutral party in Gilead’s bid to get Nichole back… and they want to talk to everyone in the household.

That’s how June winds up talking to some Swiss officials, without the Waterfords or any other observers in the room. “I am the child’s mother, and I want Nichole to stay in Canada,” she says, adding that Fred isn’t the baby’s father — which they know already, having somehow gotten wind of the tape she made for Luke. So if the Waterfords have no biological tie to the kid, easy peasy, right? Well, no: Gilead has a lot of military strength and weapons, and Canada has no desire to tick off its nutty neighbor to the south. So the Swiss float the idea that the more info they/Canada can glean about Gilead — which is a huge question mark to the rest of the world, remember — the more they might be able to do. June offers up Nick as a source: As a commander and former Eye, he’d be an information goldmine. The Swiss are wary that he’ll cooperate. “I’ll persuade him,” June says confidently. So she shakes hands on a deal to help protect Nichole and leaves feeling rather good (relatively) about the future. 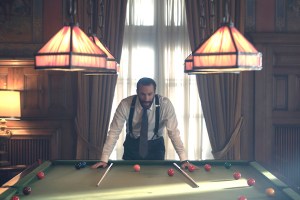 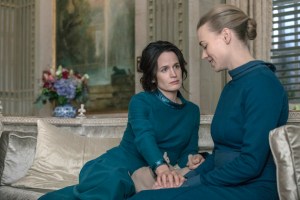 In the playroom, Olivia tells Serena, “I know this is a bit taboo, but I really loved your book.” We learn that she and George both were corporate lawyers in their pre-Gilead life, then Fred comes over with a stuffed 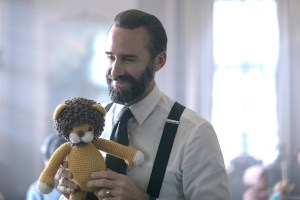 lion and does this playful little bit about asking to borrow some sugar. Serena laughs. I scream, “HE CUT OFF YOUR PINKY.” When one of the children reclaims the toy, Fred faux mopes, “I lost my lion.” Serena can relate, because SHE LOST HER PERSONHOOD.

Later, June is in bed when a martha creeps in to tell her she has a visitor outside. June smiles, like, “Yep, still got it.” Of course it’s Nick, and she runs to him in her nightgown with her hair unbound. They kiss, then she tells him about the deal she made to keep Nichole in Canada. He’s… not psyched. “They’re politicians. They have their own agenda,” he reminds her, but she’s undeterred. “This is your one chance. This is it,” she says. “This is your chance to be a father to our daughter. How many of those do you think you’re going to get?” He relents and agrees to go to the meeting. 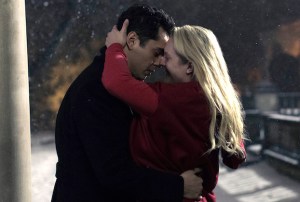 SAY IT AIN’T SO, NICK! | Of course, this is Gilead, so everything’s gotta go terribly wrong at some point. And that point arrives when a member of the Swiss delegation shows up at the Winslows’ to tell Fred that they’re recommending the continuation of discussions about getting Nichole back. In a moment alone, June asks the Swiss woman what the heck happened, and she says that they can’t do business with Nick. “I don’t think you know who Mr. Blaine is, or who he was. He is not to be trusted,” the woman says ominously, mentioning that Nick has shipped out to Chicago.

June gets Serena alone for a moment to ask what Nick did before he was a driver. “He was a soldier in the crusade. We wouldn’t be here without him,” the blonde says. And then, because she will not NOT be a raging jerk, she twists the knife by adding, “All this time you spent together, and he never mentioned anything?” Indeed, we cut to Nick on a military transport, and all of the men snap to attention and salute as he walks down the line. Interesting…. 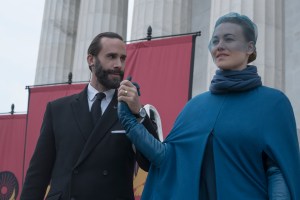 SCARF ON, GLOVES OFF | As a wrung-out Aunt Lydia helps an even more wrung-out June get ready for Fred’s big media moment. “Do you want us all to be silenced?” June asks, referring to the D.C. handmaids’ rings. “No, no I don’t,” Lydia replies, also crying. They hug, and Aunt Lydia tells her how she tries to focus on “the good I can still try to do in God’s world,” but then she’s gotta get June strapped into her brand-new mouth scarf and ready for the event.

Then we see June at the Lincoln Memorial, except the statue’s been severely damaged. It’s missing a head and an arm, and is generally a sad visual representation of the state of the ruined union. Serena approaches, and they get into an argument when Serena says she can’t wait until she and Fred are settled in D.C. and can be “free” of June. “You will never be free of me until both my children are safe,” June growls at her. There’s some back and forth — Serena is mad that June didn’t accompany Nichole to Canada, June is mad that she can’t trust Serena — and then June launches into a verbal evisceration of her former mistress.

“You can’t love! You don’t know how!” she yells. “You built this whole world just so you could have someone. But it didn’t work. You’re small. You’re cruel. And you’re empty. You will always be empty.” Serena quietly cries. “I should’ve put a ring in your mouth the day that we met,” she responds. But nope, Mrs. W: June’s gonna get the last word this time. “I should’ve let you burn when I had the chance.” 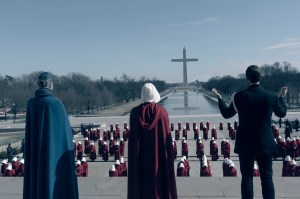 Afterward, it’s time for Fred’s moment. As June walks out to where the Waterfords are standing on the steps of the Lincoln Memorial, we see a zillion handmaids amassed on the plaza and on both sides of the reflecting pool stretching toward the former Washington Monument. When the pageantry begins, all the ‘maids kneel when June does, and Fred begins to pray in front of the largest audience to ever witness an inauguration a public appeal, period, both in person and around the globe