June’s trip to Washington, D.C., in this week’s The Handmaid’s Tale was full of horrifying revelations and soul-sucking confrontations. But shooting the episode’s ending on location in the United States capital, the show’s stars and executive producer say, was a damn near transcendent experience.

The hour culminated in June and Serena’s no-holds-barred verbal brawl inside the badly damaged Lincoln Memorial — in Gilead’s D.C., the 16th president is missing his head, among other body parts — which led into Fred’s huge media moment: Himself, Serena and June praying for baby Nichole’s return on the steps of the historic location while thousands of handmaids knelt before them and TV cameras caught it all. (Go here for a full recap of the episode.)

In separate interviews, TVLine sat down with series star/executive producer Elisabeth Moss, her co-star Yvonne Strahovki and executive producer Warren Littlefield to get a sense of what it was really like to shoot at Honest Abe’s feet. 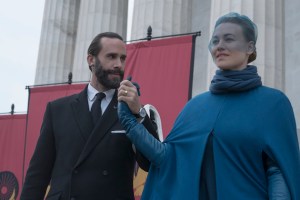 The episode, titled “Household,” shot on location at the Lincoln Memorial in Washington, D.C.
MOSS | Isn’t that crazy? Really, really crazy.
LITTLEFIELD | For two mornings, I watched the sun rise from the steps of the Lincoln Memorial.
STRAHOVSKI | The space felt so powerful. It’s obviously a very powerful place for its history and what it reminds us of in American history, so it was so incredibly special. But at the same time, for me in that wife outfit, it felt so wrong to be there, standing there. As Joe [Fiennes, who plays Commander Waterford] paraded out onto the top of those steps and looked down over the water there, the Reflecting pool, it just felt so wrong, with all of our Gilead flags up.

The behind-the-scenes work that went into securing the location was extensive, and the end-of-2018/start-of-2019 federal government shutdown affected the production schedule. Eventually, though, the way was cleared — though that didn’t mean that everyone could relax.
LITTLEFIELD | It’s the Parks Department. These are federal employees that give us the permit and allow us to shoot. They knew who we were, and they work in Washington at these monuments for the government. So I was nervous. I didn’t know if someone was going to reach out to shut us down because of who we are. But they were remarkable. They embraced us. They loved that we were there. They gave us tremendous freedom.
MOSS | We shot that scene, the Serena-June fight, in the morning; it’s quieter, and not too many tourists. When we first started, there really weren’t that many people or tourists [around].
LITTLEFIELD | On those steps, as morning joggers were beginning their day… getting closer to the actual step where Martin Luther King Jr. gave his “I Have a Dream” speech, they look up and there we are. They just stopped and bonded and connected with us. It’s a stone’s throw away from the [White House] Rose Garden, where they’re pushing back on human rights and women’s rights, and we’re doing a narrative to illuminate the importance of them. 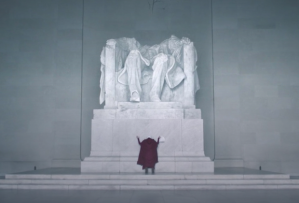 Shooting the scene’s climax, as well as June’s despondence in its aftermath, made an impression on both Strahovski and Moss. (And the latter may have broken a rule or two toward the end of the day…)
STRAHOVSKI | We were in there five minutes at a time, when we got to shoot, and there was just Lizzie and I and the camera operator, and like one other person was allowed in there. It was really amazing to have the privilege really of being in there and shooting that scene — the breakup scene, as I call it. [Laughs]
MOSS | We were just yelling at each other. [Laughs] Your voice just echoes in the chamber, and it felt epic. And then, at the end of the scene, after [Strahovski] leaves me, the director, Dearbhla [Walsh] — who is incredible — she said, “We have an idea.” [They wanted me] to go up, [like] I want to touch Lincoln’s statue. I want to put my hand on it and have a moment. And obviously, you’re not allowed to do that. It’s usually roped off. They just took the ropes away for the scene. We were like, “All right, we’re going to just do it. And if we get kicked out, we get kicked out…” I was so nervous. As I was walking up to it, I’m like, “I don’t know how many people have ever touched this thing.” I put my hands on it, and my heart was pounding. I thought alarms were going to go off, and I was going to get taken off to jail, but it was fine. Nobody cared and it was fine — unless they’re going to read this now, and I’ll get arrested the next time I go to D.C. [Laughs]