Who is The Flash‘s new science guy? Has a time jump been prescribed for New Amsterdam? Will Supernatural scare up an old fave? Might Manifest host a Charming reunion? Read on for answers to those questions plus teases from other shows.

Have you heard anything about The Flash’s Caitlin Snow having a romantic interest in Season 6? —Clarice
A romantic partner? I cannot say for sure. But it looks like both Caitlin and Cisco will be making the acquaintance of a fellow scientist, since the CW series — in addition to casting this new baddie —  is busy filling the role of a socially awkward, African-American genius in math and science (who specifically is a bit obsessed with aliens and their tech). 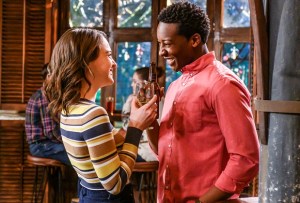 For how long will God Friended Me’s Miles and Cara be separated? —Dee
Violett Beane is “hoping for a very long time,” if only “so that I can be in Paris for a long time!” she recently joked to me. But seriously…. The EPs have said that the Paris arc will play out over a few Season 2 episodes, and thus put Cara and Miles to a bit of a test. Taking the writing gig in Europe “was most powerful thing she could have done,” said Beane. “And honestly, both Miles and Kara being mature enough to realize that if she stayed, they would be different people and their relationship would be completely different, was amazing.” As for the friends’ future? “I think that if it’s kismet and meant to be, this will only strengthen them.”

Any scoop on Charmed? – Melody
If you think you’ve seen the last of Alastair’s bad brood, think again. Charmed’s second season will introduce us to yet another of his offspring, one who’s tired of being overlooked and underestimated just because she’s a woman. And she’s got one thing on her mind: revenge! As for other new faces arriving in Hilltowne this fall, fans can also be on the lookout for a sexually fluid witch named Kat, as well as a sexy boxing instructor named Jordan.

Anything on MacGyver? —Leslie
Season 4 of the CBS drama (not premiering until midseason) is adding the series regular role of a former Army guy, trained in psy-ops, who has parlayed his particular set of skills into a successful career as the owner of an elite military contractor. (Update: He’s been cast!) 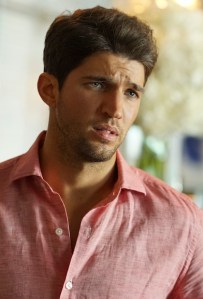 Grand Hotel: Anything on Javi? —Stephanie
Throughout this season, the real story behind his injury will be revealed — as will the reason why his father feels that it is his fault.

Any early scoop on Supernatural‘s final season?–Adder
If, like us, you’re hoping that series creator Eric Kripke might somehow be involved in the show’s swan song, we’ve got mixed news. “I haven’t had any conversations yet,” Kripke told us while promoting his upcoming Amazon series, The Boys. “I will certainly talk to [showrunners] Bob Singer and Andrew Dabb when they’re closer [to the end].” One big obstacle standing in the way of Kripke’s homecoming: His overall deal with Sony Pictures Television, which presents a Romeo and Juliet-esque situation with the WBTV-produced Supernatural. “You’re at two warring houses, so I’m not sure if they’ll let me go over there,” he says. “But I would love to talk to them about the finale. … Just from hearing from the fans, I at least want to have a couple of conversations with those guys and make sure that we send Sam and Dean off into the sunset in a way that makes everybody happy.” Bonus scoop: Jensen Ackles told us that he will be directing the first episode being filmed this season, which will air as Episode 4.

How big of a time jump can we expect from New Amsterdam’s Season 1 finale to the Season 2 premiere? –Fowsia
The new season will pick up about two months after the cliffhanger, per EP/director Peter Horton. “Everyone’s going to have, like, a new reset button on their storylines,” showrunner David Schulner says.

Will New Amsterdam‘s Iggy get his mojo back? I hate seeing him down. –Kendra
No word on the doc’s work situation, but “we’re going to jump into Iggy’s family life a lot more,” EP Schulner reveals. “Iggy’s personal story in Season 2 is going to be about the psychology of what makes Iggy Iggy, and the benefit and the detriment of living with someone like Iggy.” 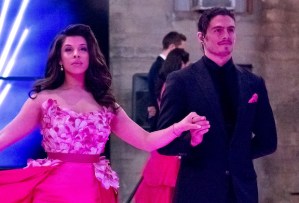 Anything on Good Trouble? –Rebecca
Jazmin’s doble quinceañera in next Tuesday’s episode “gives you a real window into Gael, into his home life, into the family dynamics that have been at work for both him and Jazmin as they come into adulthood,” executive producer Peter Paige previews. “It’ll get you, man. It’s a good, old-fashioned cry-fest.”

Any chance Ginnifer Goodwin will make an appearance on Manifest? I miss seeing her and her Charming husband Josh Dallas together. —Shelly
Know what, I actually remembered to run your question/wish by Ginny during our Twilight Zone chat, and her response was a quick, “I would love to. All they have to do is ask!” After all, the Manifest superfan noted, “There were a lot of people on that plane,” and who’s to say one didn’t look like TV’s erstwhile Snow White? (Goodwin will be free this fall, once done shooting CBS All Access’ Why Women Kill).

I saw that Aqualad will be joining Season 2 of Titans. Do you know if it will be the gay version of the character that was introduced recently in the comics? —MattB
Thus far, all that is being said about Aqualad aka Garth (played by PLL‘s Drew Van Acker) is that he is “a founding member of the Titans and Aquaman’s eager sidekick.” But I will note that executive producer Geoff Johns told me last year that “of course” DC Universe’s flagship superhero series will have an LGBTQ character at some point: “There’s one Titan that already is gay, that we’ve talked about bringing on — probably [in the second] season.”

Any scoop on DC’s Legends of Tomorrow? —Derrick
So, this was interesting: This spring, when I asked showrunner Phil Klemmer if there would be any pregnancies/babies to include in our world-famous May Sweeps scorecard, he answered, “No — although we’re planning on many, many, multiple children in Season 5.” Surely he jests, right? “Not a joke,” he maintained. “Totally for real.”

Have you heard anything about any casting changes on NCIS: Los Angeles? Specifically if Barrett Foa and Renee Felice Smith are leaving? — Jennifer
I can confirm/reassure you that Foa and Smith are both returning as series regulars for Season 11, which premieres Sunday, Sept. 29 and continues the cliffhanger finale storyline with JAG’s David James Elliott and Catherine Bell. 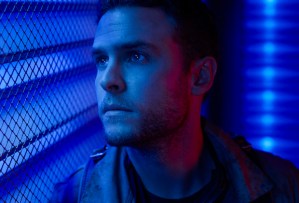 Do you know if Iain de Caestecker/Fitz is still around for Agents of S.H.I.E.L.D. Season 7? Or is it too soon/spoilerish to say anything? —Claire
Those who stalk social media can probably speak better than I to his presence on set. But what I am able to tell you is that Season 6’s finale (airing in early August) will point to a significant development. “My favorite part about the finale is the very, very end, because it will be a big shift that sets us up for next season,” Chloe Bennet said during my set visit. Added Elizabeth Henstridge: “Stay tuned until that last minute of the finale!”

Real questions from real people get real answers! If you want the Inside Line on a favorite show, email InsideLine@tvline.com! Questions left in Comments will not be read and may count against your final score. (With reporting by Vlada Gelman and Andy Swift)