While it’s nowhere near as bad as the time his wife and daughter were ripped from his side and forced into slavery, the latest episode of The Handmaid’s Tale probably isn’t going to go down as one of Luke Bankole’s Best Weeks Ever.

He gets to talk to June for the first time in years, but only for a few minutes. Then he is forced to have a cozy chat with a woman who helped bring about the very dystopia in which June is now ensnared. And then, for the kicker? He gets an unasked-for truth bomb — in the form of mixtape! — that is sure to complicate matters as we move forward.

Read on for the highlights of “Unknown Caller.”

Ofmatthew isn’t exactly doing cartwheels for her walking partner, though. She makes a point of telling June that she’s praying for Luke to return Nichole to her “rightful home.” And when ladies part, June has the perfect retort to Ofmatthew’s “Under His eye”: “Bite me.”

At home, Lawrence refuses to help June find out whether Luke is in imminent danger. “We’re all in danger,” he says, which is true, but c’mon dude! 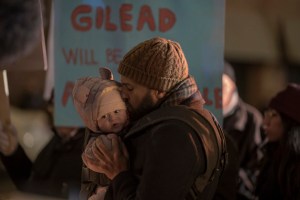 SERENA HAS HER SAY | It must be Opposite Day in Gilead, because Fred makes a point of inviting Serena into the meeting where he and the other white guys are discussing how to get Nichole back. “You have a say in this,” he assures her, which, again, is true. But she also has a say in her wardrobe, her life’s work, the way she orders her days and whether or not she wants to drive, but her opinion doesn’t seem to count for much in those matters. Hmm.

Gilead has no extradition treaty with Canada, so their options for recovering the infant are limited. They tell her what they know about Luke, and show her some of Nichole’s medical records that they’ve somehow been able to access. Serena cries when she sees the little inky footprints; the men promise to bring Nichole home, then leave her and Fred alone.

Fred whispers that he thought their current situation was what Serena wanted. “I want to be with her, but that’s impossible,” she says through her tears. “I just want this to be over.”

A HUGE ASK | Apparently, Serena thinks seeing the baby one last time will help her achieve the closure she desires. So she and Fred ambush June at the Lawrences’ home and tell her to call Luke and ask him to agree to a visit. “No,” she flatly replies, not super wooed by their word that it’ll all go OK. Serena asks for a moment alone with the handmaid. “You don’t think I want to see her?” June asks, incredulous, but eventually agrees to make the call — mostly because “I want you to owe me,” she tells Serena.

Luke almost doesn’t pick up when his phone rings; he’s at a convenience store, it’s raining, there’s a lot going on. But he eventually does take the call. With the Waterfords and Commander Lawrence looking on, June reassures her husband that she and Hannah are both OK. June holds it together far better than I would in that situation, but Luke cries as he apologizes for what’s happened to her. “I should’ve tried harder to find you and Hannah,” he says. She gently shuts down that argument and tells him to bring Nichole to meet the Waterfords at the Toronto airport the next day. He’s dumbfounded, but recovers enough to say “not him, just her.” The call cuts off as June is telling him she loves him.

As June leaves the room, Serena breathily says, “God bless you.” June looks like she wants God to do something quite different to her mistress, but says nothing and goes to her room. Later, Mrs. Lawrence sympathizes with June about how tough the call must’ve been, then says that what was important was that “the love came through” — like it did when the commander wooed her via mixtape in college. She also mentions that she’s still got all of them in the basement, which will become important later.

“How’d she sound?” Moira later asks Luke, back at their apartment. “Like June,” he answers. 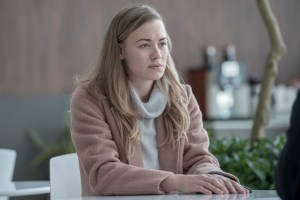 SERENA MAKES THE TRIP | At her parents’ house, Serena gathers some mementos — photos of her as a child, a necklace bearing the 1 Samuel verse “For this child, I prayed” — and just has enough time to slip a covert package from Rita into her bag before Fred shows up to say it’s time to catch the flight. I am shocked when he brings her to the cargo plane and allows her to travel abroad with only a guardian to accompany her, but my surprise at Fred’s sudden leniency is trumped by my joy when Mark Tuello (aka the man who offered Serena a way out of Gilead the last time she was up north) meets her when she lands in Toronto. Mrs. Waterford quickly dismisses her Fred-approved chaperone, then prepares to see Nichole.

Tuello informs her that the meeting is going to take place in public, and that he’s brought some clothes for her to change into because “We want you to blend in.” And may I say, the man has chosen quite a chic traveling outfit, what with the cowl neck sweater and a coat I covet.

Luke is understandably very wary as she approaches him and extends her hand; he won’t shake it. “God bless you,” she says. “F—k you,” he replies, cradling a sleeping Nichole to his chest. Serena remains calm, thanking him for agreeing to the meeting, but he makes it clear that he’s only there because June asked. Their brief encounter is all over the place. He scoffs at her promise that June is safe. She gives him the name of June’s new commander. He refuses to promise that he will tell Nichole about her, harshly informing her that the girl “is going to know exactly where she came from and how brave her mother was for getting her here. That’s her story. You’re never going to be anything to her.”

Serena cries, saying that Nichole “was my miracle, and I let her go. Because I wanted a better life for her, and so did your wife.” And when that doesn’t completely sway him, her tone sharpens. “You need to understand that I protected your wife,” she says sharply, and whatever Luke hears in her voice causes him to pocket the necklace after all.

Before they part, Luke asks her if she wants to hold the baby, who’s woken up. Of COURSE she does, and it’s about as tearful as you might imagine. (Side note: I want to eat this delicious little muffin of a child actor.) Afterward, Tuello reminds her that his offer still stands: “Treason and coconuts.” But she turns him down again, barely making it into the changing area before she has a sobbing breakdown.

Back on the plane, we see that there’s a satellite phone in Serena’s purse, along with a note that reads “if you need me.” And it’s still there when she deplanes in Gilead, reporting to Fred that at least “now it’s over.” But Fred’s been doing some thinking. “It doesn’t have to be,” he whispers. (Make sure to check out what Yvonne Strahovski has to say about Serena’s solo trip here.)

JUNE’S CONFESSION | But wait: What about the package Rita gave Serena? Apparently Mrs. Waterford did indeed get the parcel — which was marked “For Luke” — to its intended recipient. And when Luke pops a tape into a Walkman, he’s at first met with the bouncy opening bars of “You Make Me Feel Like Dancing.” But after a moment, June’s voice cuts in. In a flashback to earlier in the episode, we see her in the Lawrences’ basement, recording a message to her husband on one of the commander’s old mixtapes.

Prefacing her message by saying she’s ashamed, June tells Luke exactly what she’s been up to in the recent past. “I need you to know that Nichole, she was born out of love. Her real name is Holly, and her father’s a driver named Nick. You met him,” she says, crying. “He helped me to survive. I need to believe that you can forgive me. I’m not the woman you remember. She’s part of me. And I’m doing what I need to to survive. You should, too.” Then she promises him that she’s trying to get to Hannah, and that she loves him, and Luke is completely undone by the end of the recording. 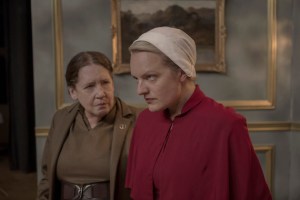 15 MINUTES OF SHAME | At the supermarket, Ofmatthew has just informed June that she’s pregnant again — and neither of them is excited about it — when some Eyes show up and load June into the back of a van without telling her where they’re going. Aunt Lydia is there when she arrives at her destination, and the chipper older woman gets the handmaid dressed in a new red gown, then deposits her on a soundstage. Fred and Serena are there, too; the set is dressed to look like they’re in their living room. “Serena, what did you do?” June whisper-shouts to her mistress, who won’t answer her. And after Lydia reminds her charge not to try any funny business, some TV cameras turn on and start rolling.

In Canada, Moira runs home to tell Luke he’s got to turn on the TV. When he does, he sees the Waterfords telling the world that they are a “family in mourning” who just wants the Canadian government to return their daughter to Gilead. Back on the set, we zero in on June’s face as Fred’s voice distorts and eventually fades into nothing. June shoots daggers into the camera, her expression pure rage, as U2’s “Sunday Bloody Sunday” cues up on the soundtrack inside her head.