Ain’t no party like a Gilead party, ’cause a Gilead party don’t stop… until Aunt Lydia goes psycho on a handmaid, right there on the living room carpet.

A christening event in this week’s The Handmaid’s Tale goes really wrong, thanks to the aforementioned auntie’s extreme flip-out. It’s a horrifying scene that we’ll talk about more in a little while — suffice to say, Ann Dowd remains one of this show’s great lights — but you’ll have to forgive me if I’ve yet to put myself back together after witnessing Emily’s heartbreaking reunion with her wife and son.

After so much tragedy, watching an extremely brittle Em tentatively engage with her partner and child reaffirms my faith in the resiliency of the human heart. But make no mistake: The encounter isn’t the Hallmark movie ending for which we might’ve hoped. Post-Gilead and The Colonies, how could it be?

Oh, and then something goes real bad for June, Luke and little Nichole. Read on for the highlights of “God Bless the Child.”

THANK THE LORD | Bells toll as everyone gathers to celebrate all the babies recently born in the district. “It takes a village,” June voiceovers as she and her fellow handmaids file by armed guardians, “and machine guns.” As they approach the church, she surreptitiously eyes everyone, wondering who might be turned into an ally to help her “burn this s–t place to the ground.” Aunt Lydia rides by on an invalid scooter, reminding her girls to be on their best behavior. “Hell on wheels,” Alma jokes under her breath.

Inside, the handmaids who have given birth get prime seating. June’s new walking partner, the seemingly pious Ofmatthew, is positioned next to her. We learn she’s had three babies, one of whom is brought up to the altar when the district’s new parents (aka commanders and their wives) show off their kids. June softens a bit upon noticing that Ofmatthew is staring at a little one with dark skin. She tells Ofmatthew that her son is cute, but she gets a bland platitude in return, so she stops trying. Also of note: The Putnams are up there with baby Angela.

Commander Waterford is in the audience, but Serena is not. June has a flashback to Hannah’s christening, which was a private, genial affair attended by Luke, godmother Moira and Grandma Holly. Then she considers Waterford, telling us that she should feel hatred for him, but her emotions are more complicated. But she’s certain of this: “It isn’t love.” At the front of the congregation, the commander who’s leading the proceedings brings up Nichole, whom he says was taken “by an unrepentant sinner.” He asks those assembled to pray for her safety. “Amen,” June says aloud.

PARTY TIME | Afterward, the Putnams invite Aunt Lydia and the handmaids to their house for a reception. Janine is so excited to see the baby, and though Naomi Putnam doesn’t return the handmaid’s level of joy, she does thank June for what she did on the bridge back in Season 1 and even tosses an icy “bless you” Janine’s way. Then Lydia and the ladies in red are shuttled off to a back room, where they’ll hang out at their separate-and-unequal affair until it’s time to go home.

When Serena arrives, she and June have a quick chat in the hallway. Serena says she didn’t want to be a “distraction” at the dedication. June uses their few moments together to give her former mistress a pep talk, reminding her that half of the women who’d backed her plan to teach Gilead’s girls to read hadn’t abandoned her when things went sideways, and the patriarchy isn’t going to smash itself. Then Serena wonders if June regrets not escaping when she had the chance. “Not without Hannah,” June replies, adding that from the inside, there’s still hope she’ll get to see her daughter again. When Fred approaches, June takes off, and Serena makes it clear that she’s there to support Naomi — not to be with him. 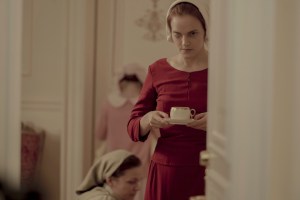 ‘WEAR THE DRESS. PULL THE STRINGS’ | Down the hall, it’s clear the day’s exertions have taken a toll on Aunt Lydia. She wearily sits down, and Janine brings her something warm to drink. Janine exudes nothing but love for the older woman, saying she prayed for her to get better after Emily’s attack. “I know what the girls think of me,” Lydia says, noting that she’s getting hate from all sides: The commanders blame her for Emily’s escape. “I should have never saved her from The Colonies,” Lydia grouses. But Janine pipes up that she’s glad she saved her. “Me, too,” Aunt Lydia says, all maternal and loving. I know I’ve said it before, but between this scene and what happens later, Ann Dowd is a freaking national treasure.

Meanwhile, in the kitchen, Fred gets a moment alone with June to tell her he’s concerned about Serena. It’s time “to get on with things together,” he says, but June wonders, “Is that what your wife wants?” He admits that it’s hard to know, but he’s pretty sure Serena isn’t satisfied “planting flowers and knitting sweaters.” So June plants the seed of his giving Mrs. Waterford “a real voice, behind the scenes of course.” To my surprise, he’s open to it, if it will “fix things” between them.

Naturally, June beelines it to the Putnams’ indoor pool room, where Serena is smoking on a chaise lounge. “The commander wants to reconcile,” she announces, adding that she made a suggestion for Serena to have more freedom in her marriage. “Wear the dress, pull the strings,” June advises her. Serena wordlessly hands her the cigarette case and lighter, and the handmaid avails herself of it. Then they sit there, smoking in companionable silence. 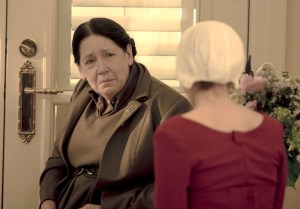 AUNT LYDIA SNAPS | When little Angela wakes up, Naomi brings her down to the parlor so the guests can ooh and aah. Janine breaks protocol in a huge way when she approaches the Putnams and asks to hold her daughter. Aunt Lydia even breaks out her billy club, but Naomi allows it. The little girl cries the whole time, but it seems to be going OK when Janine voluntarily hands the baby back to her former mistress. But then that one remaining eye gets even crazier than normal, and soon Janine is insistently suggesting that she could move back into the house and give Angela a brother or sister. “I just want to be with my daughter!” Janine cries, which Aunt Lydia apparently views as a bridge too far (too soon?). So the older woman strikes the handmaid down and continues to beat her, so out of control in her anger that she bats June away when she tries to intervene. Then June yells for someone else to stop her, but none of the commanders or their wives lifts a holier-than-thou finger to make that happen, so June puts her whole body between Janine and Lydia’s wrath and shouts, “STOP IT NO” like she’s disciplining a dog who chewed up a loafer until Lydia comes to her senses and stops.

Janine is carried off by guardians. Lydia looks around, bewildered. “My deepest apologies,” she mutters before hobbling to an empty room and sobbing. (To see what stars Ann Dowd and Madeline Brewer had to say about the shocking scene, read our post-mortem with the actresses.)

FAMILY REUNION | Up in Canada, Emily and her wife Sylvia see each other for the first time in years outside a subway station. They hug, and Emily looks like she’s in pain. I mean, she probably is. Back at Sylvia’s house, the pair is awkward around each other, which they acknowledge, but it doesn’t make the situation any less weird. Their son, Oliver, isn’t home yet from school. Emily asks if he remembers her, and it’s such a terrible thought that he might not, she can barely get the question out.

But when Sylvia shows Em his room, it’s covered in photos of her and them as a family. One framed drawing of his depicts her as a superhero “fighting to get home,” Sylvia quietly explains. Before Emily can have a relieved breakdown over the whole thing, Oliver comes home and runs upstairs. Emily is so happy to see him, and it lightens everything up considerably. “He’s so big!” she marvels to Sylvia. (Side note: This scene near about DID. ME. IN.)

At bedtime, Oliver asks Emily to read him a bedtime story. While she does, both she and Sylvia start crying so hard that the impatient kiddo eventually decides to take over reading the book himself. After he falls asleep, Emily joins Sylvia for a beer and some stilted conversation on the porch.

Elsewhere in the Great White North, Luke and Moira make arrangements to have Nichole baptized — even though the flashback earlier showed us that June was the main driver behind Hannah’s ceremony. “This little one should be absolved of their sins,” Luke says. 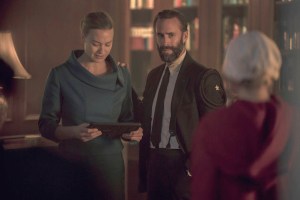 LOOK OUT, LUKE! | While June is waiting to leave the Putnams’ house, Serena creeps close to give her some intel on how she can see Hannah playing outside after lunch at her school. And that seems like a huge win, no? Too bad a few minutes later, a guardian comes in and wants to see Commander Waterford immediately: He’s got a video of a Canadian protest showing solidarity with Chicago, which you’ll recall is rebelling against Gilead. Luke is at the protest, and he’s wearing Nichole in a carrier. The Waterfords force June to confirm Luke’s identity, which she does reluctantly. And while Serena gets all gooey over how big Nichole has gotten — why do I get the feeling that Mrs. Waterford’s allyship suddenly has gone from hesitant to nonexistent? — June walks out of the room, sits on the floor and has a whole bunch of emotions (joy at seeing her daughter safe, fear over what it means for Luke) all at once.