Adam Levine‘s disastrous, much-derided performance at the NBC Upfronts presentation on May 13 was foreshadowed the day prior on Universal’s Stage 12 — aka home of The Voice. The singing competition was pre-tapingSeason 16’s Semifinals on a Sunday vs. airing live on Monday because Levine and fellow coaches Kelly Clarkson, Blake Shelton and John Legend were due at the aforementioned event in New York the next day.

By all accounts, Levine did not want to attend that Sunday taping. As one source tells TVLine, the Maroon 5 frontman expressed frustration beforehand at having to be present when, at that point, he had no artists left in the Season 16 race. And he did not hide his frustration. One eyewitness tells TVLine that Levine was “very difficult” during the entire taping, refusing opportunities to offer commentary to the other judges’ performers.

At least in part, Levine’s attitude might have stemmed from resentment of a Season 16 rule change that didn’t guarantee that each coach went to the Live Playoffs with the same number of team members. Season 16’s Live Cross Battles — which replaced the trademark Knockouts — cut his team in half (from eight members to four) and ultimately left him with zero singers by the Semifinals. (In Season 15, the Knockouts sent each coach to the Playoffs with six team members).

During the episode that aired May 13, the odd coach out praised Team Blake Shelton’s Andrew Sevener, Team John Legend’s Maelyn Jarmon and Shawn Sounds, and Team Kelly Clarkson’s Rod Stokes, but host Carson Daly didn’t even go to Levine for comment after solo performances by the rest of the Top 8. What’s more, while talking with Stokes, Levine’s disgruntlement with alterations to The Voice‘s format rose to the surface. “I still don’t understand how you’re not on my team. I don’t think anybody does, just ’cause it’s weird how it works now,” he said. “I’m still learning the rules of the new show.” 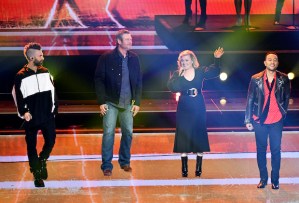 But it was when Levine brought his apathy out on stage at Radio City Music Hall — in front of his NBC bosses hosting the annual Upfront showcase of returning and new programming — that things came to a head. Singing on stage alongside his fellow coaches, Levine was near-motionless — a stark contrast to his much more enthusiastic and animated colleagues. “Adam had been checked out for a while,” notes an NBC insider, “but this was a new low. It was essentially the straw that broke the camel’s back.”

Paul Telegdy was said to be particularly incensed. The co-chairman of NBC Entertainment witnessed Levine’s performance firsthand and, per multiple sources, was not happy with what he saw. One insider says the exec was “embarrassed” and “furious” that Levine exhibited such indifference in front of the very people (read: advertisers) who pay his $26-million annual salary.

Although accounts differ as to what happened next, one NBC source says Telegdy called for Levine’s immediate firing (a position he quickly backed off on). Another source at the network insists Telegdy and his fellow execs were very appreciative that in the middle of a week of live shows, the coaches flew to New York, on Mother’s Day, to perform early Monday morning.

But one thing is clear: Something changed between May 10, when NBC announced that Levine was returning for Season 17, and the morning of May 24, when his exit was announced by Daly on the Today show. As one insider observes, “This was, at the very least, a mutual decision.”