Let’s get one thing straight upfront: I’ve got nothing against The Voice’s Adam Levine. I’ve been attempting to sing Maroon 5 songs in the shower since “Harder to Breathe.” I only wish I was cool enough to pull off the I-just-grabbed-this-out-of-the-laundry-hamper look that he favors. And I’ve really admired some of the contestants that he’s coached on NBC’s talent show (especially Season 13’s Addison Agen).

But it’s time for Levine to take a break for a season or two, and here’s why: He lost a lot of face with the audience when he championed Reagan Strange over DeAndre Nico during Season 15. (Click here if you’ve managed to forget that debacle.) As a result — or at least partially as a result — not a single member of his team this season was voted through to the Finals — or, for that matter, the Semifinals. So he spent the last couple of weeks as a well-compensated seat filler! 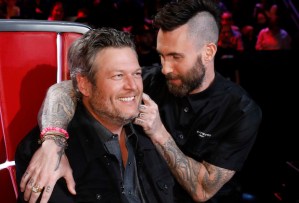 Levine also didn’t seem to be all that into it this season. Though he had fun ribbing frenemy Blake Shelton (as he always does) and goofing around with Battles adviser Charlie Puth, he appeared to be as invested in the proceedings as we might be when listening to a Blind Auditioner who’s only exciting enough to get a one-chair turn.

So I say give Levine some time off. He’s already on board for Season 17, but after that, bench him. Put Puth or Panic! At the Disco’s Brendan Urie in his seat, let us forget Reagangate and then bring Levine back fired up and ready to score his fourth victory. What do you think, Voice fans? Would you be OK with Levine sitting out a season or two? Vote in the poll below, then hit the comments.