Play favorites much, Adam Levine? When The Voice coach’s two remaining team members, Reagan Strange and DeAndre Nico, found themselves in the Bottom Three with Team Blake Shelton’s Dave Fenley in Tuesday’s Top 10 Results Show, the former was too ill to sing for the Instant Save. Yet viewers were still allowed to cast their votes for her. Which was bad enough… and then Adam went and made it so. Much. Worse. 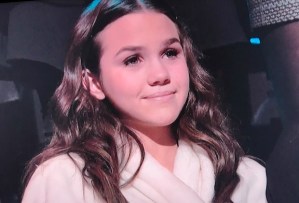 When the Maroon 5 frontman should’ve been discussing DeAndre’s performance with host Carson Daly, he instead spent most of his time campaigning for votes for Reagan. Yes, Adam expressed his typical confusion as to why DeAndre was in the Bottom Three and mentioned that he’d sung “like a champ.” But the emotional plea that he made on Reagan’s behalf was unreal.

“There is an unbelievably talented little girl right now who is not able to fight for her position on this show,” he said, mentioning that he has two daughters himself. “The thought of breaking her heart by not urging everyone to give this girl a shot to go and redeem herself next week would be too far beneath me.” 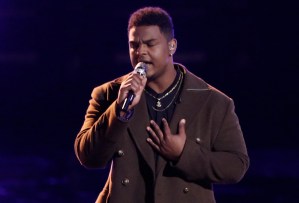 Whereas apparently torpedoing DeAndre — who’d actually gotten on that stage and sung for the Save after landing in the bottom with a Bruno Mars cover that Adam had stuck him with — was not too far beneath him. “I gotta fight for my girl,” Adam insisted. “I’ve gotta make sure that I represent her properly in this moment because she didn’t have a chance to use her voice tonight, so I’m gonna use it for her as well as I possibly can to make sure she can make it next week.”

What do you think? Was Adam just doing right by Reagan… or doing DeAndre very, very wrong? Let rip in the comments.