The Fresh Off the Boat actress took to social media late Friday to vent about ABC’s decision to renew her sitcom for a sixth season. That’s right, it appears Wu — who starred in the summer sleeper Crazy Rich Asians — is upset that the network did not cancel Fresh Off the Boat. Reps for ABC and 20th Television declined to comment. TVLine has also reached out to Wu’s camp for a comment. (UPDATE: Wu issues mea culpa, calls Twitter rant “ill-timed.”)

In a series of tweets, Wu groused that she was “so upset now that I’m literally crying.” When one user later congratulated her on the “great news” (i.e. Fresh Off the Boat‘s renewal), she responded, “No it’s not.” She also wrote “dislike” under a post announcing the renewal news on Fresh Off the Boat‘s official Instagram page. See below… 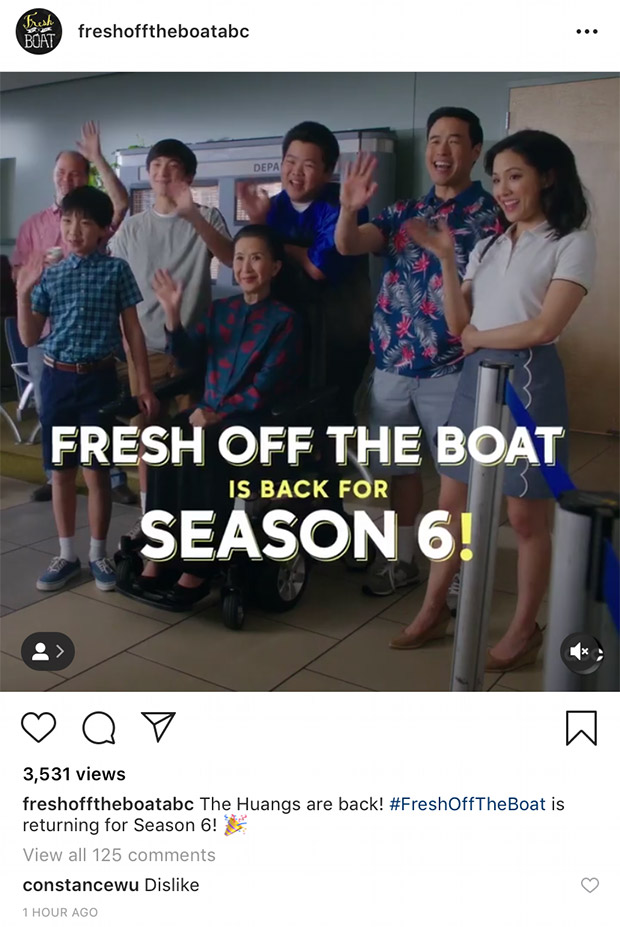 That was not a rampage, it was just how I normally talk. I say fuck a lot. I love the word. Y’all are making a lot of assumptions about what I was saying. And no, it’s not what it’s about. No it’s not..what this is all about. Stop assuming.

Loosely based on Eddie Huang’s 2013 autobiography of the same name, the ’90s-set comedy centers on the Huang family, who relocate from Washington D.C., to Orlando in order for Eddie’s dad (Randall Park) to open his own steakhouse. The cast also includes Hudson Yang, Forrest Wheeler, Ian Chen, Lucille Soong, Chelsey Crisp and Ray Wise.

Fresh Off the Boat spent its first four seasons as part of ABC’s Tuesday-night sitcom block. It then moved to Fridays last fall as part of a revived TGIF block (alongside the just-cancelled Speechless and the Fred Savage-hosted Child Support). Its April 12 finale drew 3.1 million total viewers and a 0.6 demo rating, matching both its previous episode as well as its season average. It ranked 11th out of 12 ABC sitcoms this season.