The Marvelous Mrs. Maisel’s Emmy-winning EPs, Amy Sherman-Palladino and Daniel Palladino, have designs on the modern art scene, having optioned the non-fiction book Ninth Street Women for their next Amazon project. 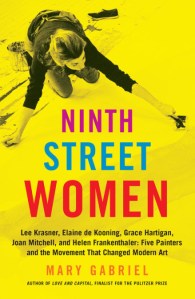 Released in 2018, the Mary Gabriel-penned work chronicles the lives of five women — Lee Krasner (wife of Jackson Pollack), Elaine de Kooning (wife of Willem de Kooning), Grace Hartigan, Joan Mitchell and Helen Frankenthaler — “who dared to enter the male-dominated world of 20th-Century abstract painting — not as muses, but as artists,” according to the book’s official logline. “These women changed American art and society, tearing up the prevailing social code and replacing it with a doctrine of liberation.”

The project is part of Team Palladino’s overall deal with Amazon Studios that they first signed in 2017, following Mrs. Maisel‘s initial two-season pickup. Gabriel will serve as a consulting producer. The Hollywood Reporter first reported on the adaptation.

Mrs. Maisel‘s second season was released last December, after its inaugural run amassed a whopping eight Emmy awards, including for Outstanding Comedy, plus Comedy Writing and Directing wins for A-SP. As previously reported, Season 3 — which is expected to premiere sometime in 2019 — will consist of eight episodes and feature This Is Us‘ Sterling K. Brown.