Sunday’s episode of American Gods marked the end of the deity’s tenure with Wednesday, and a bloody ending it was. The hour chronicled the lore surrounding Mad — was he a king who’d lost it all? a cursed, crazy man wandering the forest? a warrior who’d beheaded his own grandfather? — without landing on any certainties. After all, the stories about the lumbering leprechaun and the way he ruled Ireland (or didn’t) before organized religion arrived on the Emerald Isle are so old, Mad himself can barely remember them.

But as the episode unfurled, Mad became sure that death was coming for him… and he cautioned Shadow not to intervene when it did. Wednesday’s bodyguard didn’t really understand, and given that he’d been tasked with protecting Wednesday’s magical spear, he didn’t seem to pay Mad’s ravings much mind.

The redhead first tried to leave without bloodshed. But Wednesday/Odin refused to let Mad quit, reminding him that he was under contract and that Laura Moon still needed to die for good. So eventually, Mad confronted the old man at dinner and made it clear he was willing to off Odin in order to be free.

As all the other gods scattered to safety, Mad reached for the spear. And when Shadow wouldn’t let him take it, the two burly men began to brawl. Sweeney enraged Shadow by admitting that Laura’s fatal car accident was his doing — on Wednesday’s orders — and that he’d slept with her in New Orleans. And then, after Mad grabbed the spear and went for their boss, Shadow grabbed it from him and swung around: The move put the weapon in perfect position for Mad to impale himself on it accidentally. 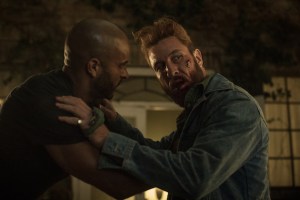 But Sweeney was going to mess with Wednesday one way or another, so he pulled the blade out of his chest and disappeared it like the gold coins he so freely moved in and out of thin air. “Your spear is the sun’s treasure now,” he said, drooling blood and ending the sentiment with a word we won’t print. And then Mad Sweeney fell to the ground, muttering, “I used to be a king,” and died.

Were you surprised by Mad’s actual demise? Hit the comments!