Jughead and F.P. try to wipe a bad batch of Fizzle Rocks off the streets this week on Riverdale… but is their family getting wiped out, too?

After Baby Teeth’s ritualistic murder, Jughead and F.P. are looking for answers, and the weirdo coroner tells them a matchbook from the Maple Club was found lodged in the kid’s throat. Penelope claims he was just another happy customer at her friendly local S&M dungeon, but while Jughead and F.P. are there questioning her, another customer goes berserk, brandishing a knife and foaming at the mouth before F.P. is able to subdue him. They trace the outburst back to an extra-potent strain of Fizzle Rocks known as “G” that’s going around town — and it’s coming straight from Gargoyle henchman Kurtz.

F.P. sets up a sting to catch Kurtz in the middle of a drug buy and hauls him down to the station in handcuffs. But Kurtz, as usual, isn’t fazed. (He’s always kind of creepily amused, isn’t he?) He says Baby Teeth was “just the warm-up” for the final quest: “Save the Little Princess.” Because while her dad and brother have been busy, Jellybean has started playing Gryphons & Gargoyles with Ricky (the boy who stabbed Archie), and he leads her far out into the woods… where the Gargoyle King is waiting.

ALICE, COOPED UP | Betty is still on her anti-Farm crusade, and though Edgar tells her a charming origin story during their sit-down, he won’t reveal how he lets followers like Alice see their dead relatives. So she tries to convince Alice that her son Charles is really dead by showing her a (fake) gravestone, and when Alice won’t budge, she resorts to chloroforming her mother (!) and holding her captive in the bunker, refusing to let her out until Alice comes to her senses. (She also threatens to kill Evelyn if she doesn’t stay away from Alice, so it’s safe to say Dark Betty is back in a big way.)

She softens, though, when she listens to Alice’s taped Farm confessions and hears how scared Alice is of Betty’s anger. After another chat with Edgar — where he admits the dead relatives might be “real or illusionary,” but they definitely help his Farmies to heal old wounds — Betty decides to drop her obsession and let her mom go back to The Farm. She even gets her serial killer dad Hal to sign divorce papers… but he wants a favor in return: He wants her help getting out of prison. 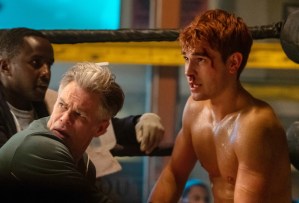 JACKED IN THE BOX | Archie climbs back into the ring for a rematch with Randy Ronson, Elio’s fighter who narrowly beat him by decision a couple months back. Archie sees the match as a way to honor his fallen brother Baby Teeth — and ignores Mad Dog’s warnings that Randy may be especially pumped up for this fight. Yep, Elio is feeding him G-infused water to get him ready, and a foamy-mouthed Randy absolutely tears into Archie in the early rounds. Archie manages to knock him out, though, with a well-placed right hook… but long after the bell, Randy isn’t moving at all. Did he O.D. on G? And will Archie blame himself for his death? (Of course he will. He’s Archie.)

* Toni didn’t have much luck convincing Cheryl to drop The Farm — her love for Jason is just too strong — so she decided to join up in solidarity. It’s a trick, though: She’s just going undercover to help Betty expose the place for the sham it is.

* Veronica helped set up Archie’s boxing match and even gave him a new set of trunks and a robe… and they almost kissed! (Fred chuckled when Archie insisted they’re just “friends.”) Josie was in the crowd next to Ronnie at the fight; will they be fighting soon for Archie’s affections?

* Pretty obvious that the “G” in G doesn’t stand for Gargoyle, but for Gladys, right? How will she react, though, when she sees what her underlings are doing to her daughter Jellybean?

* There’s no way two muscle-bound boxers like Archie and Randy actually weigh in at 154 pounds, is there? Doesn’t that look to be at least 20 pounds shy?

* Cheryl, as usual, had this week’s best quote, getting ready for another Farm outing: “Do you think these Louboutins are too flashy for kombucha brewing?”