We got to spend some quality time with The Farm’s leader Edgar Evernever this week on Riverdale… and for a dangerous cult leader, he is “a yummy snack,” isn’t he?

When The Farm welcomes the town to an open house, Betty takes a tour of the premises and submits to a “interview” with Evelyn, where she’s asked inane questions like “Do you bite your fingernails?” (Scientology, much?) But Evelyn cuts the questioning short before Betty can learn anything, so Betty recruits Cheryl to infiltrate The Farm… and maybe learn more about what happened to her beloved brother Jason. (He was taking Polly to The Farm when he died, remember?) So Cheryl lures Evelyn in by fake-crying in a bathroom stall about another breakup with Toni, and soon enough, she’s invited to her own “interview.” 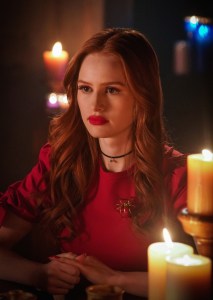 Cheryl wears a spider pin to the interview, which allows Betty to listen in — and good thing she does, because midway through, Edgar comes in and takes over, needling Cheryl about Jason’s death. She admits to her suicide attempt and seeing Jason underneath the ice, as well as torching her childhood home, and Edgar thinks The Farm can help her cope with all that. Cheryl reports back to Betty he’s a great listener, not to mention “a yummy snack” (she even calls him “Eddie”!), and when Betty sends her back in to get her hands on Edgar’s interview tapes, he takes Cheryl down a hallway, where Betty’s audio mysteriously cuts out. The next day, Cheryl won’t tell Betty what she saw down there, and is done reporting back to her… but she’s sticking with The Farm anyway.

Betty manages to sneak in during Cheryl’s initiation ceremony and steal the interview tapes for her mom and sister, and Cheryl’s, too. But Cheryl still wants to stay: They listened to her when she talked about Jason, and “they let me see him.” Wha?? Yes, she says she saw her dead twin brother and even talked to him: “The Farm gave me back my brother.” Alice admits to Betty that she gets to talk to her dead son Charles, too, and that’s why she stays with The Farm. So Betty requests a sit-down with Edgar… and tells him she wants to know “everything.”

Meanwhile, Archie gets a call from his old cellmate Mad Dog: They’re shutting down the juvenile prison and moving them over to a wing of Hiram’s new prison. With Veronica’s help, Archie gets a meeting with Governor Dooley, and threatens to blow the lid off the illegal underground fight club if he doesn’t pardon Archie’s friends. The plan works, and Archie invites Mad Dog and Baby Teeth to sleep in his boxing gym for now. But Mad Dog’s worried about his brother, who’s stuck staying in some decrepit housing project that’s overrun by Gargoyles. 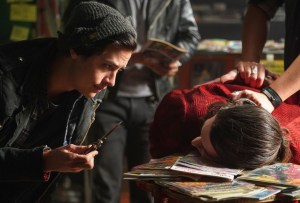 Speaking of Gargoyles… Jughead is determined to kick them and their Fizzle Rocks trade out of Riverdale, even if it means butting heads with his mom Gladys. He enlists the Serpents to be his “unofficial DEA,” and they squeeze a Fizzle Rocks dealer into telling them where the Gargoyle suppliers are. But when they pounce on one of the Gargoyles, they ruin an undercover drug bust set up by F.P., and Jughead’s dad angrily tells him he’ll throw him and the Serpents in jail if they try to play vigilante again. Archie comes to Jughead looking for help with Mad Dog’s family, though, so the Serpents rally together to clear all the Gargoyles out of that building, leading to a vicious firefight that almost gets Jughead killed. (Kurtz throws himself and Jughead out of a second-story window to escape.) Jughead confronts his mom about his near-death experience and vows to “choke your whole operation to death” — but someone else is dying instead. It’s Baby Teeth, who ends up bloodied and mutilated in the woods, with Archie and Jughead discovering a quest card and a chalice… with a freshly yanked tooth in it.

Elsewhere in “The Raid”: Veronica tried to hold her parents’ marriage together, pressing them to see a marriage counselor (“You wouldn’t be the first mobster to see a therapist, Daddy”), but Hiram announces he got an annulment, though he’ll continue to protect Hermione from any mob threats; Elio dropped by Archie’s gym to offer Mad Dog good money to fight for him, and Mad Dog eventually took the offer to set up his family with a nice house; and we got a maddeningly brief shot of a blissful Betty and Jughead in bed together.