The Riverdale kids took to the stage again for a school production of Heathers: The Musical — and it might be the most fun we’ve ever seen them have? (Maybe they should do more than one of these a year.)

Despite Hermione’s very reasonable complaints about the musical’s violent content — a cast member was murdered last year, after all — Kevin defends Heathers as an accurate portrayal of teenage angst, and demonstrates that by singing the opening song “Beautiful,” with the rest of the gang joining in. (Even Jughead!) Cheryl gives herself the role of “mythic bitch” queen bee Heather Chandler, with Betty and Veronica backing her up as the other Heathers. But she gets even bitchier when Kevin introduces Toni as the show’s choreographer. (Actually, she references a classic Heathers line that I can’t print here.) The two clash right away during a rehearsal of “Candy Store,” with Cheryl ignoring Toni’s choreography before just shoving her out of the way. 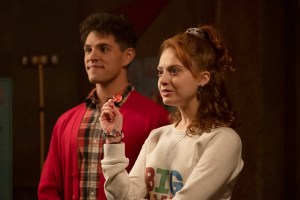 Betty’s annoyed, too, when Kevin names Evelyn his co-director, and the Farmie quickly leads the cast in a touchy-feely spiritual exercise. Betty accuses her of using the musical as “one big recruitment drive” for The Farm, but Evelyn just smiles that cult-y smile of hers and invites everyone to a pre-show cast party, where they guzzle shots and sing “Big Fun.” She also offers Kevin a “transformative” brownie (hmmm…), which leads to him having a vision of a freshly stabbed Midge. The next day at rehearsal, Fangs confesses he’s had the same vision, and Evelyn has a way for them to cleanse themselves: She sets up a “closed rehearsal” — really more of a ceremony — where Kevin and Fangs, dressed all in white, sing “Our Love Is God” and kiss, reborn as Farmies.

Things reach a boiling point between Cheryl and Toni when Cheryl catches Toni in the halls wearing her signature color of red (gasp!): “I invented red! I am red!” Cheryl orders Toni to find a different school by next week — which is not really something one student can enforce on another, but OK — and Toni gets revenge by pulling Sweet Pea and a Pretty Poison named Peaches into the theater for a little action while singing “Dead Girl Walking.” But as they disrobe, Toni has a vision of Cheryl singing “Beautiful” and runs off before they can do the deed. She tries to patch things up with Cheryl, asking her what love was like in her family — gee, that’s a loaded question — and declaring, “Maybe it’s not too late for us.” 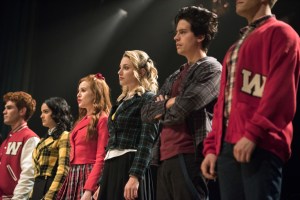 It’s show night, and the full cast stands on stage to sing the closing number “Seventeen” together, changing out of their show costumes into their regular clothes. When they finish, one audience member starts a slow clap: It’s Edgar Evernever! (Hi, Chad Michael Murray!) “I knew my dad would like it,” Evelyn gushes, as a bunch of audience members dressed in white start clapping along with Edgar in creepy fashion. Well, at least no one died, right?

* Hiram and Hermione dropped a bombshell on Veronica, announcing that they were splitting up. (He knows that Hermione sold his drug business to Gladys. Oh, and tried to have him killed. Twice.) Veronica turns to Reggie for comfort, but after they sleep together, he realizes she’s just with him because of her parents and ditches her. There’s still some hope for the Lodges, though: Hiram and Hermione accepted Veronica’s invitation to come see the musical, sitting right next to each other on opening night. 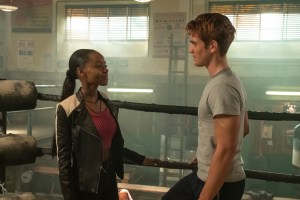 * Archie and Josie made their debut as an official couple — and it’s kind of crazy that Veronica didn’t know they were together until this week, right?

* Jughead learned his old trailer was being used as a Fizzle Rocks drug lab by Gladys and her goons… and put a stop to that by setting fire to the trailer with Betty’s help. Sorry, Mom!

* The songs from Heathers: The Musical were really amazingly well suited for the Riverdale kids, weren’t they? Archie and Josie singing “Fight For Me” in a boxing ring was perfect, as was a stressed-out Betty and Jughead asking, “Can’t we be seventeen?” (Yeah, can’t they?) The songs were great, and the cast seemed to be having a lot of fun performing them. Yes, even Cole Sprouse.

* So The Farm is clearly drugging all of its followers, right? Between the brownies and the mystery shots, I’m surprised anyone accepts any food or drink from a Farmie at this point.

* With all due respect to Cheryl’s chosen color scheme: Toni looked amazing in that red outfit, didn’t she?

* Still a little weird to see the 37-year-old Chad Michael Murray playing the dad of a high school student, but I’m looking forward to all the chaos Edgar can bring to Season 3’s homestretch.

* Cheryl got the week’s best quote, with a little help from Heathers, when Evelyn interrupted her in the bathroom: “What’s your damage, Child of the Corn?”