One of Riverdale‘s core couples hit a major rocky patch this week — but are they done for good?

Things between Cheryl are Toni have been tense for a while, and they only get worse when Toni dumps on Cheryl’s idea for a mountain getaway. Cheryl bakes muffins as a peace offering, but is clearly hurt when she sees Toni performing “Call Your Girlfriend” with Veronica at the speakeasy. (Plus, she learns Toni’s been secretly giving Nana Rose money for rent.) So she shows up at the speakeasy in a slinky cocktail dress, insisting she’s just there to gamble and treating Toni like the help, ordering her to fetch her a Bellini. (Ouch.)

Actually, she was casing the place, and she catches Toni doing the same thing late at night. A confrontation turns sizzling when they start ripping off each other’s clothes and get busy on a pool table, with blindfolds and everything. But that may have just been a goodbye tryst: Afterwards, Toni brings up how Cheryl seems to be jealous of her leading the Pretty Poisons, and “maybe it was too soon” to move in together. Cheryl tells her to move out and storms off — and is this the end of “Choni”? Cheryl channels her rage by informing Kevin that this year’s school musical will not be Godspell, but Heathers, and she’ll be getting a plum role. She already plays croquet, after all. 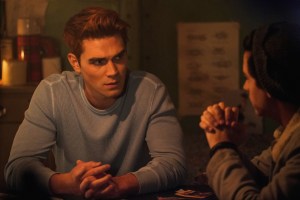 As for Archie, he finds out Stabby Lil’ Ricky wasn’t the only one targeting him: Jughead tells him there are a bunch of those “Kill the Red Paladin” G&G cards out there. Archie confronts Hiram, who admits he printed out a dozen of those cards and directs him to “hot spots” where G&G players gather. (“And so continues our nerdiest mystery yet,” Jughead sniffs.) They end up at a comic book store, where a G&G dork warns that the cards are all over town, and players could pounce at any time.

Jughead has an idea: Draw the players out by offering a “King of the Mountaintop” challenge to take out the Red Paladin once and for all. Archie will meet them in an abandoned boxing gym by the docks Hiram owns, and sure enough, a bunch of costumed players show up, with Jughead challenging one of them to knock Archie down during three minutes in the ring. Some of these dorks can actually fight, but Archie survives them all, including an old guard from his time in juvie. And after his victory, Hiram gives him the gym to keep as a way of apologizing.

Meanwhile, F.P. is about to turn 50 (!), and finally has his family back together, with Gladys and Jellybean back home. Gladys announces they even have a new place to stay: She was the “anonymous buyer” of the Cooper house, and aside from a slightly singed wall, it’s fine. Alice isn’t fine, though: She asks F.P. about his feelings for Gladys. She’s the mother of his kids, he says, so he has to break things off with Alice. (That’s two big break-ups this week!) Jughead is still wary of Gladys’ motives, but agrees to give the big speech at F.P.’s birthday party. He is the town wordsmith, after all. 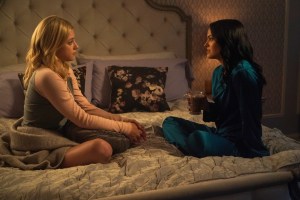 But Jughead’s worries aren’t unfounded. After a bunch of kids high on Fizzle Rocks throw hot coffee on a Pop’s waitress, Veronica confesses to Betty that Gladys is running the local drug ring now. (I do appreciate the quality “Beronica” time, which is exceedingly rare these days.) Betty breaks the news to Jughead, and though he’s defensive, he puts the Serpents on the case. Sweet Pea confirms it, and Jughead lashes out at Gladys, who admits she did it to give their family a leg up. She commands him not to tell F.P., though, because it would “break him.” So at his dad’s birthday party, Jughead pays homage to his father without spilling the beans. Yet, anyway: He plots to force his mom out of town — with Betty’s help, of course.

Elsewhere in “American Dreams”: Reggie pushed Veronica for a bigger cut of the speakeasy business and tried to steal his car back from Gladys, leading to a heart-to-heart with Veronica where he gives him the keys to his car back — and shows him the door (three break-ups?!?); the Serpents started working for F.P. and Mr. Keller as sheriff’s deputies; and Luke Perry showed up for a brief moment as Fred gave F.P. a warm birthday hug and told him, “You don’t get too many moments like this. You’ve gotta soak it up.” (Awww…)