Get you a time-traveling life partner who looks at you the way Outlander‘s Claire looks at Jamie, and vice-versa.

Starz released the historical drama’s first Season 5 photo Monday, giving devoted fans a small oasis of joy amid the hiatus between seasons commonly referred to as Droughtlander. In the shot, which you can see below, Mr. and Mrs. Fraser are resplendent in shades of green as they stand near a wagon and gaze adoringly at each other. Sure, Jamie’s been pressed into the awkward position of having to find and possibly kill his outlaw godfather… and the American Revolution is a sure thing in the very near future… and (as readers of Diana Gabaldon’s The Fiery Cross know) there’s a sneaky snake lying in wait somewhere in the countryside. But for the moment, Claire and Jamie seem to be enjoying their lives at Fraser’s Ridge.

Click on the photo below to see stars Sam Heughan and Caitriona Balfe in detail, then scroll down. 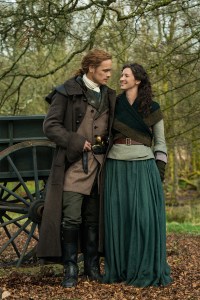 Outlander was renewed for Seasons 5 and 6 in May. Season 5 will consist of 12 episodes, based on The Fiery Cross, and has just begun production in Scotland. Per the season’s official synopsis:

The Frasers of the Ridge are here!  The fifth season of “Outlander” sees a continuation of the Fraser family’s adventures, as they navigate the trials and tribulations of life in colonial America. Establishing a home in the New World is by no means an easy task – and protecting it proves even more difficult – particularly in the wild backcountry of North Carolina, during a period of dramatic socio-political upheaval. As Claire knows all too well, friends, neighbors and countrymen are unwittingly marching towards Revolution, with members of the elite ruling classes struggling to stifle the alarming undercurrent of unrest triggered by the Regulator Movement. Against this backdrop, which soon heralds the birth of the new American nation, Claire and Jamie are forced to ask themselves just how far they are willing to go to protect their home, and praying there will be no reason to light the “fiery cross,” an ancient Scottish call to arms.

What do you think of the first Season 5 photo? Which scenes from the book are you looking forward to seeing on screen? Hit the comments and let us know!