Better get working on building Fraser’s Ridge, Jamie: Outlander isn’t going anywhere, seeing as how Starz has given the historical drama another two-season renewal.

The premium cabler will bring back Outlander for Seasons 5 and 6, TVLine has learned, echoing the supersized pickup the series got for Seasons 3 and 4.

The drama, based on a series of novels by Diana Gabaldon, will continue to follow the one-book-per-season formula it has used since its start. Seasons 5 and 6 will unfold over 12 episodes each and will be based on The Fiery Cross and A Breath of Snow and Ashes, respectively.

Starz also announced that a 13-episode Season 4, which is currently shooting in Scotland, will premiere in November 2018. The network also released three photos from upcoming episodes. Spoilers ahead, so if you haven’t read the books and/or don’t want advanced info, skip down to the pictures.

Two of the shots feature Caitriona Balfe’s Claire and Sam Heughan’s Jamie. In one, they ride a buckboard laden down with supplies, leading two horses. Given what they’re wearing, this appears to be from a different scene than we saw in the first Season 4 footage Starz released in January. In the second, given the way Claire is dressed up (and given the fact that they appear to be in a home with fine furniture), there’s a good chance that we’re looking at a scene that takes place around the time that Jamie’s Aunt Jocasta throws a welcome dinner party for the couple at her plantation, River Run. And because of the amount of plaid in the background in the third photo, as well as the fact that Bree is sitting in a lawn chair, it seems like she and Roger are attending the Celtic festival during the summer of 1969 in New England. 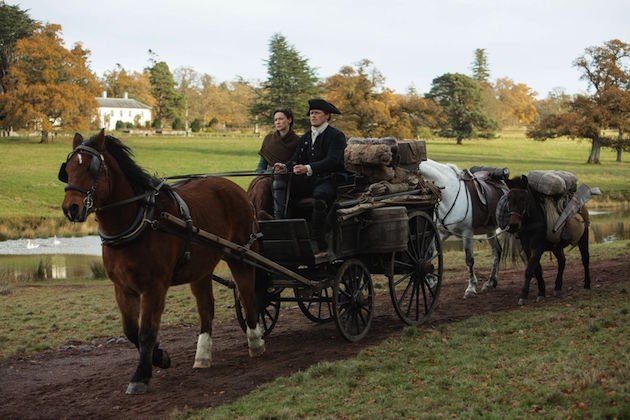 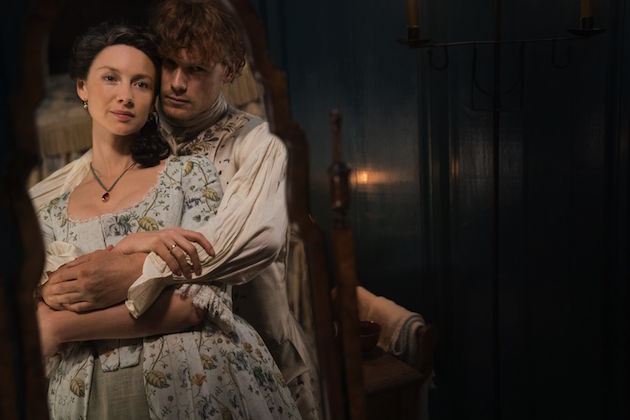 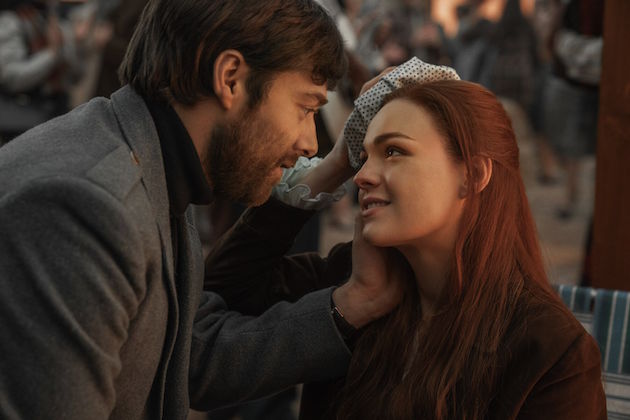 What do you think of the big renewal and the photos? Hit the comments with yer thoughts!