For her directorial debut, Danielle Panabaker wasn’t handed any ol’ episode of The CW’s The Flash. Rather, she was tasked with bringing to life Nora West-Allen’s backstory (which of course takes place far into the future. Time travel!).

This season’s 18th episode (airing Tuesday at 8/7c) also picks up in the wake of the awaited reveal that Nora traveled back in time under the tutelage of none other than Reverse-Flash, which set Barry off bigtime, and those emotions won’t cool right away. TVLine spoke with Panabaker about her debut behind the camera and the critical scenes she had the opportunity to oversee.

TVLINE | What was the biggest or the most interesting challenge that this particular script presented to you as the director?
This particular script largely takes place in the year 2049 — it’s Nora’s origin story, so we’re flashing forward to the future — and I think that was the biggest challenge, creating a world 30 years in the future on a TV episodic budget. It allowed everyone to be really creative and really push themselves, but it was certainly a challenge.

TVLINE | When we left off, things had gotten super intense after Nora’s secret came out. Are there a lot of WestAllen family emotions going on?
Absolutely. I mean, that storyline is actually going to continue even past this episode a little bit, into 519, but yes, the betrayal that Barry feels is devastating to him. And as parents, they have to deal with this struggle that we have seen in a couple different ways this season, but not at this level of “how to parent” and what should they do.

TVLINE | I don’t recall seeing Grant like that in a scene, and maybe you haven’t either. Barry’s reaction was so explosive, it was kind of startling.
I mean, Reverse-Flash is his greatest villain. He killed his mother in front of him, so to find out that your daughter has aligned herself with him.… I don’t know how you get over that.

TVLINE | Do you think an episode that is more about emotions, is more about plot, is more accessible for a first-time director than if they’d given you something that was action-heavy?
I don’t know about more accessible. Certainly it’s a different challenge, and fortunately, it’s a language I speak being an actor and having studied characters so often. I’m not sure a first-time director who wasn’t an actor would have easily understood the nuances of these characters. I also have the great fortune of living with all these characters for 110 episodes, so I deeply and intimately know their backstories. 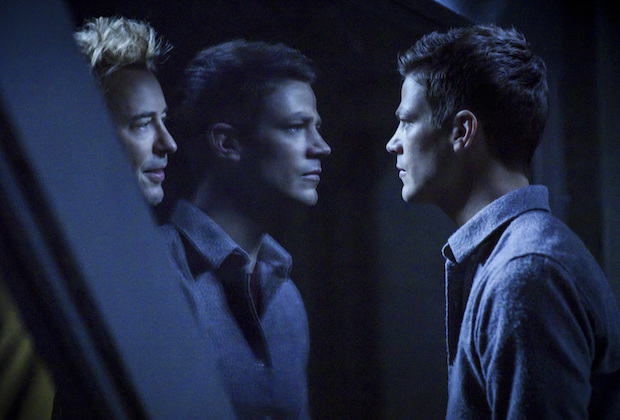 TVLINE | Just before you called, The CW released photos from the episode and there’s this one of Eobard in his future prison cell with Barry staring him down. Tease the mood of that scene.
When I read my script, I was excited to shoot that scene, in particular, from the very beginning. I think Eobard actually has a line earlier in the season where he says [to Nora], “If your father knew this, he’d be here in a flash,” and it’s true. it’s an unbelievable scene between two incredible actors. They are so gifted, so talented, and the performances are so layered and so intense. It’s a really cool moment.

TVLINE | I also see interesting things going on with reflections in the glass. It’s framed very interestingly.
I had a lot of fun with it. That set can be a little bit challenging because it’s a little constricting, but I tried to use what I could to help tell the story visually, as well. 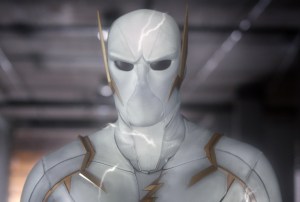 TVLINE | The episode is called “Godspeed,” which is of course a DC Comics character. How does that come into play here?
I feel lucky that I get to do one if the few episodes this season that’s really about a villain speedster. Obviously, we have Reverse-Flash all season, but he’s not running, so I immediately called and asked for all the Godspeed comic books I could get my hands on. Godspeed is sort of Nora’s first foe [as a speedster] and I think there’s something really special about that.

TVLINE | And in this episode, what is Caitlin up to this whole time?
We pick up where we left off in Episode 17, seeing how shocked everyone was as this bombshell is revealed, and very quickly, Team Flash makes the decision to read Nora’s journal. That’s how we go into this flashback/flash-forward into Nora’s origin.

TVLINE | Looking ahead a little further: Icicle (played by Kyle Secor) is back the week after this. What’s he up to?
He has unfinished business, and he has a plan for which he needs Caitlin and interestingly enough, her mom. He comes back to town to reunite with his daughter and see if he can use her meta abilities to his advantage. 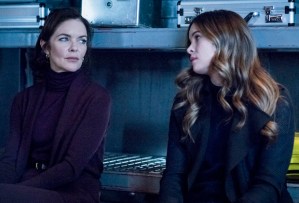 TVLINE | How are things with Caitlin and Carla (Susan Walters) these days?
A little rocky, per usual. A little icy. But I really enjoyed that we brought her into the show so much more and see Caitlin’s relationship with her and with her family. It’s important that her mom is around for this sequence.

TVLINE | Could there be some evolution, some growth for that mother-daughter relationship?
I think so. You know, Caitlin has matured over the years and I think maybe she’s open enough to seeing her mom’s remorse for mistakes she might have made.

TVLINE | Would you similarly describe things between Caitlin Killer Frost as now pretty simpatico?
Yeah. I love that this season they’ve really done a great job, in my opinion, of exploring their relationship with each other, and if they’re going to be able to coexist. I think they still would handle situations differently, but Killer Frost is definitely less acrimonious. 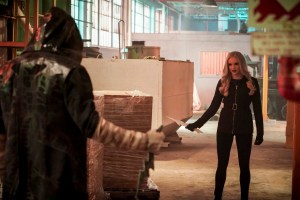 TVLINE | When I spoke to Sarah Carter, she was so excited that you, her former Shark castmate, are playing Cicada II’s most formidable foe.
It’s been so great to have her, and she brought a really cool layer to the show. Selfishly, I think it’s an incredible storyline for Caitlin, that she’s not affected by Cicada’s powers. In a way, Killer Frost is their “secret weapon.”

TVLINE | Lastly, what can you say about this season’s finale (airing May 14). How would you compare it to past ones?
Oh, man. Every year it seems like they somehow find a way to top themselves. We’re still in the middle of filming the finale, but it’s going to be really epic. I think it’s going to be devastating in some ways, and it’s got a twist on the typical Flash ending, which I’m excited for fans to see.