There’s a new Cicada out to bug Team Flash.

Just as Barry & Co. convinced Orlin Dwyer (played by Chris Klein) to be treated with the metahuman cure (and then get that nasty chest wound sewn up), S.T.A.R. Labs went on the fritz. Amid the chaos — and with Orlin still unconscious in the med bay — another Cicada surfaced to make much mayhem, zapping and lobbing heroes to and fro. The new Cicada ultimately spirited Orlin away to a remote cabin, where we discovered that beneath this hood was a grown-up version of Dwyer’s niece, Grace, who in the present day is still a comatose tyke.

“This was a fun secret to keep, because I knew it wouldn’t disappoint,” says Sarah Carter, who for weeks on Insta excitedly teased her Flash debut as Future Grace. With a hearty laugh, she adds: “It’s quite an entrance, as you saw!”

TVLine invited the alum of Falling Skies, Hawaii Five-0 and, yes, Smallville, to share some of the new Cicada’s secrets. (The CW’s The Flash airs Tuesdays at 8/7c.) 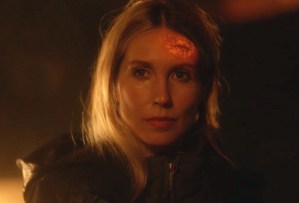 TVLINE | Grace is all growed-up! What is going on with her, though?
She is a wounded little bird. [Laughs] And she’s out to kill. She’s well-trained — by her uncle, in the future — and she wants revenge for her parents’ death more than anything. She also has come back to align herself with her uncle and save him.

TVLINE | Is her agenda identical to her uncle’s, or is there an additional layer to it? He wanted to kill all metas.
That’s a shared motive, but what makes him different when he wakes up is he’s had all the dark matter removed, so that makes him more vulnerable. He’s kind and gentle, and he loves me and he’s happy to see me. What he wants more than anything is to see me alive and well. And what I want more than anything is to get dark matter back inside of him so that we can join forces to continue with the mission.

TVLINE | She seemed pretty stone-cold during her entrance. Would you say she is less compassionate than Orlin?
Thats a nice way of saying it, yeah. [Laughs] 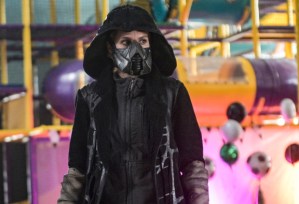 TVLINE | What’s the Cicada costume like? Because it looks heavy.
It’s so heavy, and very difficult to move in. And that’s one of the things that changes pretty fast. I wanted to make it clear who Cicada is underneath the hood and I wanted to be able to move more, so we’ve done that. There’ll be another reveal [of a modified costume].<

TVLINE | A few episodes back, Barry, Iris and Nora encountered this other Cicada when they were “inside” young Grace’s mind. Will any of them recognize you from that?
I’m not sure, I haven’t seen that in the scripts yet.

TVLINE | Will we learn how adult Grace traveled back in time?
We definitely talk about the fact that I come from the future….

TVLINE | Right, but did she have any help? Not just anybody can time-travel.
We do show how she figured that out — and also some of the tools she acquired in the future and brings to the presents.

TVLINE | Oh, she has other toys besides her dark matter-infused, curved blades?
Yeah, yeah…. 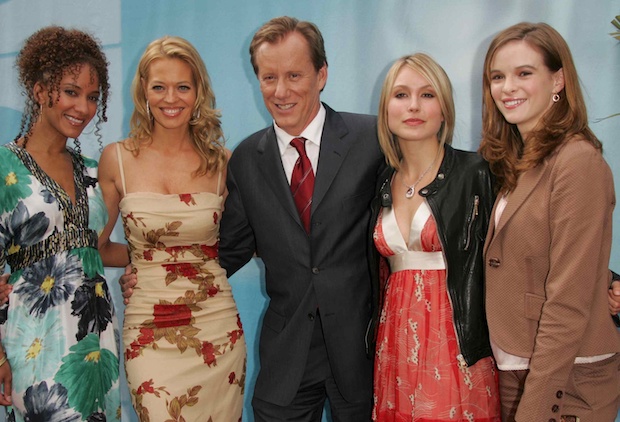 TVLINE | A burning question that I and perhaps only I have: Was it random that you and [fellow Five-0 guest star] Lili Simmons shared a storyline in the same October episode of SVU?
So random. It’s just what happens to me. I’ve also worked with Jess (The Flash‘s Jessica Parker Kennedy) on a film, and I worked with [The Flash‘s] Danielle [Panabaker] for two years on Shark (photo above). There’s usually someone I know and love on any new job.

TVLINE | Has it been fun reuniting with Danielle?
Absolutely. I adore Danielle. And not only do we have scenes together, but she’s my equal on the show. I’m after her more than anybody, because she’s the biggest threat. Powers-wise, [Killer Frost] is a good fight!