“Oh brother!” had nothin’ on “Oh sister!” in Thursday’s Grey’s Anatomy. While in New York with Link to perform (what ultimately turned out to be) a vertebral column resection on an 18-year-old named Jonah, Amelia wound up agreeing to have dinner with her horrible sister, Nancy (Embeth Davitz)… who surprised her by inviting her even more horrible sister, Kathleen (Amy Acker), whom she described as being like “Martha Stewart if Martha Stewart also had a license to diagnose you with a personality disorder.” Sensing that his bedmate was the “Good Shepherd” that gave the episode its title, Link not only stuck up for her, he went along with her charade that he was her husband, Owen — yep, she’d never told the relatives that hadn’t attended her wedding that it had been followed by a divorce!

The non-couple probably would’ve gotten away with their exercise in role-play, too, had Kathleen not “accidentally” mentioned the family reunion to their mother, Carolyn (Tyne Daly). Having met Owen on a visit with Derek, she no sooner was through the door than the jig was up. “Fake Owen,” Nancy told the so-called black sheep of the Shepherd family, might just be “the most demented thing you’ve ever done.” At that, Amelia stood up for herself, not that her siblings would give her credit for anything if their lives depended on it. When Link attempted to help, he only complicated matters by mentioning Betty and Leo. Finally, off the dinner from hell, Amelia kinda-sorta broke up with Link — he now knew too much about her for their non-relationship to remain uncomplicated!

Thankfully, before the duo returned to Seattle, Carolyn reached out to her daughter and expressed her remorse for pushing her away in the wake of her father’s death. “If you don’t think you’re worthy of love, you’re wrong,” said Mom, “and that’s on me.” So go ahead and blame her, and by all means, move on. What if Amelia couldn’t? “Then that’s on you.” Taking Carolyn’s words to heart, Amelia apologized to Link — with his favorite donuts, even. “You are more than a human blue light,” she admitted, “though you’re very, very good at blue-lighting.” And as if they were ever really off, they were now extra on. What does it all mean for Amelia — and for her and Link — going forward? Fresh off another knockout performance, here’s Caterina Scorsone with the answers. 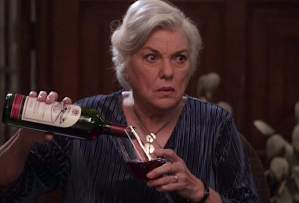 TVLINE | Biiig episode for Amelia — and, thanks to her mom, a big turning point, too.
Oh my gosh, yeah, huge! And when I heard Tyne Daly was actually coming, my heart leapt. I was terrified. All these years, I’d been playing creatively with the image of her as Amelia’s mom. Whenever Amelia’s thinking about her past, I’m picturing Tyne Daly in those inner narratives. So when she walked on the set and I met her for the first time, I burst into tears. It was so embarrassing!

TVLINE | Would you agree that the trick for Amelia going forward will be not falling into old patterns — in other words, not going when the going gets rough?
I think what her mom gave her was consciousness. In the early years of childhood, there’s so much information being laid down in the unconscious brain, and for Amelia, that story had a lot of trauma. So as she became older, a lot of her reactions to external stimuli were informed by a fear response or a trauma response as opposed to a consciousness about why she was doing things. So when her mom was able to generously and courageously reflect back to her, “I wasn’t able to help you with attachment to heal after that trauma, and that might be why some of your reactions in relationships are a little broken,” she gave her that consciousness that she was too young to have as a 5-year-old. She now has the missing puzzle piece. She can move on. Not only that, [but Carolyn said, in essence,] “I believe that you can. You have the tools and the grit and the heart to take this missing puzzle piece and do amazing things with it.” 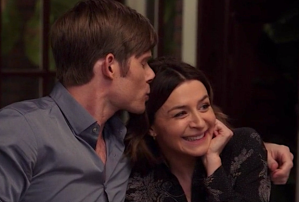 TVLINE | I thought it was so bittersweet that, after Amelia promised Owen she’d try be less wary, it wound up being Link, in a way, that she wound up doing that with.
One of the things that’s always been difficult for Owen and Amelia is they both have some pretty severe trauma, so even when she’s trying to be conscious and practice contrary action when she’s afraid, if Owen goes into his fear reaction, they just kinda bump up against each other and their amygdalae are at war. [As the season goes on,] he starts to understand how traumatized he’s been in life, too, so hopefully, they’ll both continue this healing process and become more functional in the love department.

TVLINE | Since Link accepted Amelia’s apology, can we now say that they are officially, totally in an actual relationship?
[Laughs] I don’t know if we can call it a relationship. It’s not like she’s wearing his pin or anything! But it’s definitely moved beyond the kind of alternative pain relief [that she initially called it]. She was trying to keep it very surface, but she has definitely realized that he’s more substantive than she had hoped. He’s actually a pretty stand-up guy. We’ll see where she goes with that. I think she’s wise to be a little cautious. She doesn’t wanna jump in with both feet, because that would be crazy — she just got out of a marriage.

TVLINE | Really, he should be sending a thank-you note to Nancy and Kathleen, because he never would’ve gotten quite such a golden opportunity to show Amelia what he was made of if they hadn’t been so utterly horrible to her.
[Laughs] I know! And I feel like it’s so unfair [to their portrayers]. They’re just the most delightful, charming women, and they were forced into being these kind of “wicked stepsisters.” But yeah, Amelia’s kinda bewildered by Link. He’s so tirelessly supportive, and yet he has boundaries, where’s he’s like, “Mm, that wasn’t OK with me.” He’s got so much psychological health, it would seem, and Amelia hasn’t really encountered that, so it’s almost like he short-circuits her short circuit. She’s like, “What is this that’s happening here?”

TVLINE | Did you know that Amelia and Link were going to become an item way back when he gave her, I believe the term was, “pants feelings”?
[Laughs] I did not. I thought that that line was only serving the storyline with Meredith, but here we are. You never know on Grey’s Anatomy.

So, what did you think of “Good Shepherd”? Amelia’s turning point? Link’s reaction to the Shepherd sisters? Hit the comments.