See, Alex? This is why we don’t accept job offers while tipsy. After being made interim chief following an afternoon of tippling with his bride in Grey’s Anatomy’s Season 15 premiere, Karev actually had to deal with all of the headaches that ordinarily would have been Bailey’s in Thursday’s episode. Did he make it through Day 1 without losing any friends, firing anyone or tearing through Grey Sloan’s supply of aspirin? Read on. 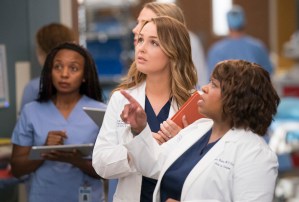 ‘GOOD MORNING, MRS. FIREMAN’ | As “Gut Feeling” began, Owen and Amelia were celebrating their reunion between the sheets (to the tune of The Voice’s Chloe Kohanski); Ben was bidding Bailey adieu for the day and admitting that, thanks to their conflicting schedules, he was missing her; and when Miranda arrived at work, she had to adjust to the fact that Alex was now in her — well, the chief’s — parking spot. After Maggie encouraged Amelia to “go there” with a newly extra-sexy bike-riding DeLuca — anything to keep Teddy’s baby bombshell from falling on her — her sorta sis explained that she was now off the market. Still, she couldn’t deny that Link gave her “pants feelings.” Speaking of whom… Koracick escorted the newbie to the new chief, who immediately OK’d his request for an expensive new 3D printer. “Are you nervous?” Bailey asked her temporary replacement before leaving him alone in her office. He wasn’t; was she? Let’s be real — she was. Big time. But at least she got to pawn off Vik on him. (How he didn’t get axed after killing a patient by disobeying orders in the premiere, I can’t imagine.) 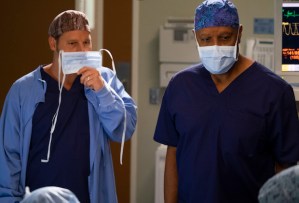 Quicker than you could say “stat,” Grey Sloan was thrown into a bit of a tizzy by Alex’s surgical schedule (which proved almost too tempting for Bailey not to step in and fix). The new chief would soon have an even bigger issue on his hands. See, while all this was going on, Richard and Link tackled the case of Mr. Buckley, a shop-class teacher who disastrously lost consciousness while helping a student with a table saw. When Levi reported that the patient had an insanely high blood alcohol level, Webber took a special interest, and told Link that he’d been where the fellow was and wanted to talk him through it. “The more sober he gets,” Richard said, “the worse he’s going to feel.” But Mr. Buckley insisted that he hadn’t hit rock bottom — he didn’t even drink. The mishap had been just that — a mishap. Richard was pretty hostilely not buying that when Alex walked in and asked him to step back. “You’re gonna lecture me? I trained you,” huffed Richard, still clearly ticked at being passed over for interim chief. Undaunted, not only was Alex going to lecture Webber, he was going to order his mentor out of the O.R.! 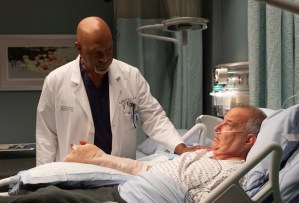 ‘FIND ME A PEN’ | While Alex got buried in requisitions, Richard learned from a student’s mom that no way had Mr. Buckley really been intoxicated when the accident occurred. Still, Webber didn’t believe it. So he went back to Mr. Buckley’s room and poured him a freaking drink! “I know what withdrawal feels like,” he told the teacher. Meanwhile, Alex complained to Mer that anyone who takes the chief job gets nothing but flak and never gets to practice medicine, either! She, in turn, complained that Cece wanted her to spew emotional vomit before setting her up with a guy. Why wasn’t it more like ordering off a menu? “You have earned the right to pick and choose whoever you want to let in,” he assured her. No sooner did he leave that conversation than Link informed him that Mr. Buckley was wasted again. Thing was, Richard told Alex, Mr. Buckley didn’t take a sip of that drink, he had a rare condition that got him super drunk super easily — even Jell-O could do it. (And Richard hadn’t really poured vodka, BTW; it had been water.)

‘MY PORTS AREN’T THE ONLY THINGS CLOSED OFF IN HERE’ | When Mer checked in on Cece, she was in good spirits — and, as mentioned above, eager to get better acquainted with her new client. “You know the drill,” she said. “You work on me, I work on you” as a trade. But Grey, as didn’t even need to be mentioned above, remained reluctant to really open up. So instead, the matchmaker focused on Taryn — which mainly meant trying to get her to pump Mer for info about her father. Jo wanted something from Grey, too — she missed working with her terribly! Mrs. Karev and Bailey didn’t have the same kind of shorthand at all. In fact, Miranda was treating her fellowship like a chore. Later, inspired by her chat with Alex, Mer thought that she had figured out a way to save Cece. In response, the matchmaker told her doctor to go out and buy five new outfits that would break the mold and make herself ready for something new. The same way Mer was going to take a back-door approach to saving Cece, Cece was going to take a back-door approach to getting to know Mer. 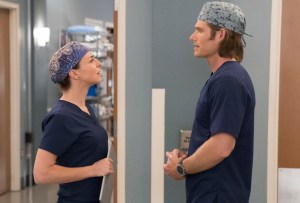 ‘ARE YOU ASKING ME OUT?’ | When not working on Mr. Buckley, Link approached Amelia and said that he’d love to pick her brain about nerve-graft transfers — which she quickly realized was code for “I’d love to go on a date with you.” When the newcomer let slip that he’d heard that she liked Italian, she demanded that he reveal who was feeding him intel. “Maybe I shouldn’t answer that,” he said. Welcome to Grey Sloan, Link! Upon finding out that Maggie had put him up to it, Amelia inquired whether she should expect any other surprise romantic overtures that day. Later, Amelia asked Koracick why it seemed like everybody was against her and Owen. “This conversation is boring me,” he replied. But at least the newly reunited couple was happy. And maybe eventually, they’d get used to saying things like, “We have to go pick up the baby.”

‘I THINK THE WORD YOU’RE LOOKING FOR IS ENRAGED’ | While Richard solved the mystery of Mr. Buckley’s case, Owen took care of the student that the teacher had pushed into a table saw. Along the way, Maggie learned from her colleagues that Jackson had e-mailed to say that he was taking a leave of absence. This being news to her, she was ticked. (One minute, they’re almost engaged; the next, he’s vanished and just left her a voice-mail as a heads-up!) And unfortunately, she took that upset into the O.R. with Owen. Later, Maggie admitted to Amelia just how hurt she was by her boyfriend’s disappearing act. She’d known that he wanted to step back from his life and reevalute after almost being killed. But… “Is there something wrong with me?” she asked. “I almost died, too, and all I feel is lucky.” At least Jackson had said in his message that if he’d told Maggie to her face that he was going, he wouldn’t have been able to. That was nice… kinda. 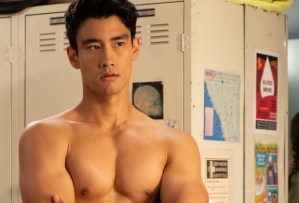 ‘WE SHOULD BE MAKING MAGIC’ | In other developments, the bloody nose that Vik casually treated turned out to be a whole lot worse than a bloody nose. “I need an attending!” he cried. In short order, Koracick tore Roy the new a—hole that he was long overdue. After Alex joined them in the O.R., the patient flatlined. “I’m just an intern,” Vik cried. “This isn’t on me.” Before Koracick left the room, he snarked to Alex, “You’re killing it, chief.” Afterwards, Karev followed Vik to the locker room — cue Levi flustered by Nico’s shirtlessness — and fired the screw-up. As the episode drew to a close, Jo lit into Bailey for not treating the fellowship like a partnership. Miranda admitted that Wilson was right, she had been distracted. Nonetheless, Bailey was still pissed that Alex was OK’ing requisitions right and left. It was no biggie, he insisted. He was still under budget for the month. Except that the budget he was looking at was for the quarter, not the month. Finally, Link asked Richard to join him and DeLuca for burgers and darts at the docs’ favorite watering hole, and Maggie started to text Jackson that they should talk… then didn’t send the message.

So, what did you think of “Gut Feeling”? Sorry to see Vik go rather than grow? Didn’t Maggie deserve more than a voice-mail from Jackson? Hit the comments.