As Game of Thrones returns for Season 8, woe be unto those who don’t have the Stark family’s well-being at the top of their lists. Because, as series stars Maisie Williams and Sophie Turner tell TVLine, Arya and Sansa‘s take on who’s a friend and who’s an enemy is rather, well, stark.

“Everyone’s a threat,” Williams says. “We’re done trusting people. We’re done with being pushed over. We finally managed to scrape our family back together somewhat, minus Jon.”

Turner adds, “We just have to protect that, whatever the cost.”

After spending much of Season 7 at odds, the finale found Ned and Catelyn Stark’s daughters uniting to take down Littlefinger, who tried to convince Sansa that her sister was out to destroy her. 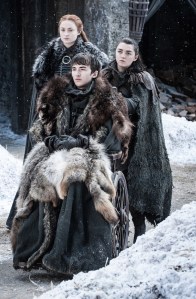 The conniving Lord Baelish’s trial was swift, his death at Arya’s hand even swifter, and Turner and Williams preview that the unified Stark siblings will brook no threats to their hard-won hold of Winterfell.

“There’s no more goddamn excuses. You’re in or you’re out,” Turner says, chuckling a bit. “If your name ain’t Stark, you ain’t getting in.”

Williams laughs, as well. “Yeah. We stand at Winterfell and we go, ‘What’s the password?'”

HBO’s Game of Thrones returns for its eighth and final season on Sunday, April 14, at 9/8c.