The last time Game of Thrones‘ Jaime Lannister and Brienne of Tarth were in each other’s presence, it appeared that Daenerys had gotten her wish: Cersei promised that the Lannister armies would ride north to help fight the white walkers in the coming war.

But if wishes were dragons, we’d all ride like khaleesi, right? Once Cersei’s true intentions became clear to Jaime — in short, she lied — he let her know how deeply he disagreed with her deception. “I pledged to ride north,” he said. “I intend to honor that pledge.”

At a recent press day for the HBO series, TVLine asked Christie if her character believes the vow the Lannisters made in the Season 7 finale. “No, I don’t think she does,” she replied. “Brienne is a realist.”

She added that the female knight only cares to deal in practicalities. Translation: While those of us who adore Brienne and Jaime’s unlikely friendship might want to hope that she’d feel sure of his loyalty to her, “In that moment, when we last see them together, it’s all about doubt,” Christie recalled. 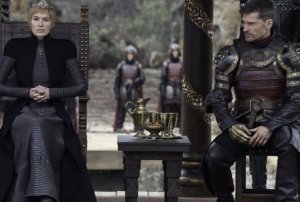 Meanwhile, as viewers of the Season 7 finale know, Jaime risked beheading, slipped a glove over his golden hand and set off on his long trek north — directly disobeying an order from his sister/lover/baby mama/queen.

“Even though he’s known as the most dishonorable man, he is a man of his word,” Nikolaj Coster-Waldau said. “The promise they made was very important, but it also was the right thing to do. He gave his word to his brother, who is the only person he truly trusts.” He glanced at Christie, who was sitting next to him. “Of course, together with Brienne.”

In addition, Coster-Waldau noted, the unleashing of a bloodthirsty, nearly unkillable wight at Dragonpit made the impression it was designed to.

“Seeing that thing was frightening. He believed it,” he said; stopping the Night King’s army from taking over Westeros quickly dwarfed the intrafamilial drama brewing between Tywin Lannister’s twins.

“He’s going up there for those reasons. I don’t think he goes to spite Cersei or because he’s angry with her,” Coster-Waldau said. “It’s not to do with that.”