What exactly does one say to a man who’s recently learned he’s expecting his fourth child… with his twin sister? Does “congratulations” really cover it?

That’s the quandry in which we were placed on Thursday when we chatted with Game of Thrones‘ Nikolaj Coster-Waldau, who gamely accepted the best wishes on behalf of his incestuous alter ego.

“It’s very, very exciting. It’s wonderful. He’s preparing,” the actor said, laughing. “He’s been out looking at nursery items. And he’s throwing a baby shower for Cersei next week — that’s why we won’t be in Episode 6.”

Coster-Waldau was in New York to promote his latest film, Shot Caller, but we got him to answer a few questions about the Kingslayer’s most recent drama — including that miraculous recovery from a near-drowning. Read on for the scoop.

TVLINE | All joking aside, Jaime hasn’t been able to be excited about any of his kids being born, at least publicly.
No. When she gives him this news, for a second, he can’t help but feel that moment of joy because it’s clearly been something he’s wanted his whole life. And now, for a second, it’s like this could happen. Obviously, he forgets about everything that’s around. [Laughs] How crazy this world is. I think he has a moment of feeling joyful. And then, of course, they hug and she breaks the spell by saying [Lowers voice], “Don’t ever betray me again.” I have a question that I would like to put out there: How did he betray her? Because I still haven’t understood that. I still don’t get it. I know we did the scene. I still don’t know how he betrayed her. Can you answer me that question?

TVLINE | I would assume she means the Tyrion meeting, right?
Yeah, but [Jaime] didn’t set that up. Bronn set that up. He met with Tyrion, he went straight to her and said, “I met with Tyrion.” I don’t know how he betrayed her. Maybe because he should have killed Tyrion instantly. Is that it?

TVLINE | We watched Jaime try to explain to her that there’s a big dragon, and there are more of them on the way. She didn’t seem to care. How important do you think it is to him to make her see what’s happening?
That’s funny. Because in a way, she’s not the only one. Daenerys doesn’t quite believe, Tyrion doesn’t quite believe that whole thing with the white walkers. In our world, we still have people debating, “Is climate change real or not?” And though everyone says “We have the proof, I’ve seen it!” people say, “I’m not sure. I don’t believe that.” I’m not trying to make this about climate change, but I’m just saying: Seeing is believing, in many ways. It is such a crazy thing. Now, he comes in looking like he’s just gotten too close to a barbecue. So you would think that would lend some sort of, like she’d go, “Maybe it’s right. You do smell a little burned.” But it’s Cersei. And in a way, she’s also saying “I don’t care.” She’s not going to allow herself to be taken alive, I think. She’s willing to go down with the ship, which is unfortunate.

TVLINE | When Tyrion and Jaime met in the tunnels, had your first scene with Peter Dinklage in quite a while. I was a bit taken aback by how angry Jaime still is over the circumstances of their last interaction.
He’s just had his whole army annihilated by a dragon, and his brother is the Hand of that queen, trying to conquer their world. And he killed their father, by the way. He comes with this beautiful speech, which is so true and heartfelt. I believed him when I heard him, when he said, “My father always wanted me dead,” which is true. But Jaime didn’t get to say the obvious thing, which is, “Yeah, I know, brother, that’s why I helped you escape. But you chose to turn around and go back.” He didn’t have to go back.

There’s a lot of love — he loves his brother — but there’s also a lot of betrayal from Jaime’s point of view. Of course for us, as viewers, we say, “Tyrion did the right thing. He killed Tywin because Tywin was terrible.” We kind of want to forget that he also killed Shae because we can’t really justify that, so we won’t talk about that — which makes sense. That’s how we get through life. Jaime is saying, “He killed my father! I know he might not be the best father, but he’s my dad!” You don’t kill your dad. Even though you hate your country, you don’t go and then become right hand to the next country that wants to take your country… That is really what happens to the people of King’s Landing. There’s a foreign power invading the country. I’m just saying: You asked me why he would be angry. That’s a little upsetting. [Laughs] 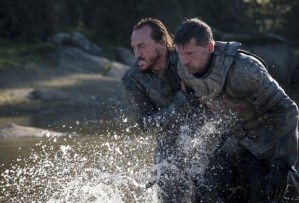 TVLINE | Do you think, now that Jaime has seen the dragon, he’s primed to more readily believe that there’s an army of the dead bearing down on Westeros?
He’s willing to believe a lot, but he has a lot on his plate right now. [Laughs] He’s the commander of an army that doesn’t stand a chance, that’s been brutally attacked. He has to try to make sense of what he just witnessed. And he knows that they can’t beat this army. He knows they have no chance. So in his world, the best outcome would be to make some kind of truce with Daenerys. Unfortunately, his sister doesn’t necessarily share his ideas, because she’s already out buying mercenaries.

TVLINE | Clear something up for me: In the Loot Train Battle, Jaime’s horse gallops through water that barely covers its hooves. And then Bronn knocks him off, and all of a sudden he’s sinking into really deep water.
What you didn’t know was when the dragon landed, its left foot went into this very muddy part of the river and created this crater. And also, what’s not part of the story, which should have been told, I think, is that Bronn for four years was lifeguard at the King’s Landing beach. He saved a lot of people there. Which also explains how he could drag a very heavy Jaime out of the water. I said they should put that into the script, but they were like, “Yeah, we don’t need to do that.” But there are some pictures out there of Bronn sitting out on the beach in his Speedos. It would be great, because Jerome [Flynn] could pull that off. It’s a side of Bronn we haven’t seen. [Laughs]