Spring has sprung in New York, but winter just arrived at Studio 8H, courtesy of Kit Harington. The Game of Thrones star made his Saturday Night Live hosting debut this weekend, just a week and a day ahead of the HBO phenom’s highly anticipated return.

Harington’s episode was at its strongest when it focused on his GoT gig. Cameos by past and present castmates — including Emilia Clarke, Jon Bradley and real-life wife Rose Leslie — made for a great, Q&A-style monologue. Equally amusing was a digital short featuring myriad GoT spinoffs, including a crossover between Thrones and Law & Order: SVU.

Harington did not prove himself a natural at sketch comedy, but he was a great sport throughout the proceedings. His most memorable skits found him dressed as a Michael Jackson impersonator, then stripped down to polkadot briefs for a “lookie at his cookie.” What follows are the non-GoT centric highlights… 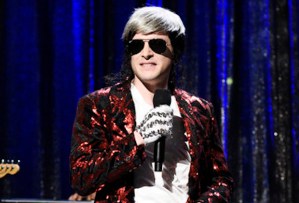 BEST: CRUISE SHIP
This skit, which at times felt like a sequel in spirit to Peter Dinklage’s “Space Pants,” was an amusing showcase for Harington, who portrayed a King of Pop impersonator trying to find his way in a post-Leaving Neverland world. The parts where they cut to members of the audience didn’t quite land, but Kate McKinnon as a moonwalking Macaulay Culkin more than made up for that. (Video will be added as soon as it is made available.)

HONORABLE MENTION: JOE BIDEN COLD OPEN
Jason Sudeikis reprised his role as “Obama’s grandaddy,” the prospective presidential candidate who has already gotten himself into trouble for being “a hugger, a kisser and a little bit of a sniffer.” The sketch itself was meh, but Sudeikis gave it his all, mining as much humor as he could from the former VP’s touchy-feely interactions during sensitivity training with undecided voters.

HONORABLE MENTION: THERESA MAY
Harington’s Winston Churchill slow-danced to Sara Bareilles in this digital short documenting a terrible, horrible, no good, very bad day in the life of the current prime minister (played by McKinnon). Among the funniest sight gags were the Queen’s Guard flipping May the bird, and a butterfly disintegrating on the back of May’s hand.

HONORABLE MENTION: BACHELORETTE PARTY
Harington let his freak flag fly as fiancé Bryan, who surprised his wife-to-be with a burlesque number taught to him by his elderly French instructor. Melissa Villaseñor got the biggest laugh when her connection to the groom was revealed.

WORST: GRAPHICS DEPARTMENT
This Beck Bennett/Kyle Mooney sketch answered the question, “Is it possible to create something even more irritating than ‘Brothers‘?” It was truly grating listening to them do their nerd schtick as they fought with Harington’s Bryan over who deserved to be employee of the month.

What were your favorite sketches this week? And what missed the mark? Watch all of the highlights above, then grade Harington’s Saturday Night Live hosting stint in our poll.