Monday’s Night 2 of The Voice’s Battles couldn’t come fast enough to put behind us the “Oh, come on!” of Season 16’s first missteps by the coaches. And while the gaffes might not have been as egregious as Adam Levine throwing DeAndre Nico under the bus to champion inconsistent-at-best Reagan Strange in Season 15, I think we can all agree that (a) Kelly Clarkson messed up by pitting standout Mikaela Astel against her trio, The Bundys, and (b) her colleagues messed up by not stealing the superlative teen. For that matter, I couldn’t believe that Team John’s sublime Savannah Brister wasn’t stolen after she lost her Battle with the unbeatable Maelyn Jarmon. But, rather than sulk (as much as I’d like to), let’s distract ourselves with a review of Night 2’s Battles, including the one that made Kelly admit so we wouldn’t have to, “I screwed up!”

Team Adam: Celia Babini (Grade: C+) defeated Karly Moreno (Grade: B-) on “Friends” — Karly stolen by Blake | Aw, man. This Battle was a bummer from the start, since it guaranteed that, barring a Steal, one of two singers that I dug would be eliminated. But Adam defended the matchup by noting how different his team members’ voices were. “Yours punches,” he told Celia, “and Karly, yours is soft.” Er, not sure how that was supposed to help. In rehearsal, the duet actually sounded sorta disastrous. (Poor Celia’s voice even cracked big time during stage rehearsal.) In the moment of truth, eesh… their first stab at a harmony was way off. Individually, however, they sounded pretty good. Karly sang like she had honey spraying from her throat; Celia, like she was using her powerful pipes to test the auditorium’s structural integrity. Ultimately, Karly probably gave the more solid performance, but Celia and her memorable lower register, imperfect as it was here, made a bigger impression. Kudos, Blake, for stealing Karly! 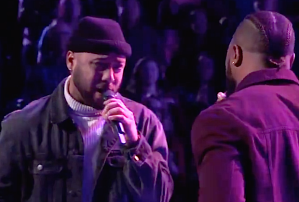 Team John: Julian King (Grade: B+) defeated Denton Arnell (Grade: B) on “Grenade” | In rehearsal, adviser Khalid mentioned that he really liked Denton’s personality, which struck me as sort of a bad omen, like commenting on a boxer’s shoes instead of his punches. Still, Denton sounded like he was having an easier time with the Bruno Mars cover than Julian; his vocal was overall smoother, more assured, at least at that point. When the guys took to the stage, they started off fairly evenly matched. But soon, I was won over by the passion that Julian put into his performance. Denton definitely had the richer voice, but since both of them acquitted themselves admirably, I’d have to give the win to the competitor whose performance was more memorable, and that was Julian. There was a tone to his vocal that was distinct enough that I’d be able to pick it out of a crowd; that’s money in the bank for a singer, no? 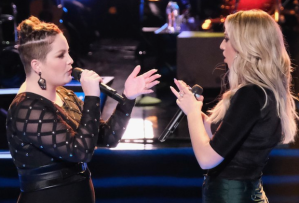 Team Kelly: Presley Tennant (Grade: B-) defeated Rizzi Myers (Grade: B) on “Whataya Want From Me” | Before her contestants arrived for rehearsal, Kelly told adviser Kelsea Ballerini that Rizzi and Presley were pretty much in the same lane, and maybe that was one singer too many in that lane. (Can one have too many singers in one lane? Does Blake, whose teams are always country-heavy, know this?) When Rizzi and Presley started practicing, it sounded like two powerful singers having a shouting match; I’d have called the landlord with a noise complaint (and I like loud — I know almost all the worlds to Hole’s “Violet,” for Pete’s sake). On stage, Presley sounded the teensiest bit flat during the verses but really came alive on the choruses. Rizzi was a little muted at first, but smooth and on pitch. Eventually, as I feared it would, the number turned into a yell-off. Still, I had to give credit where it was due: Both Presley and Rizzi nailed their big notes; it was just shriekier than I’d have liked. “I screwed up” pairing these two, Kelly declared when they were through. But the winner was pretty clear (to me, if not the coach): Rizzi, who served up a ton of charisma along with great range and an irresistible growl. 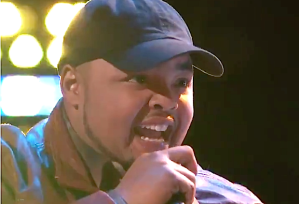 Team Blake: Dexter Roberts (Grade: B+) defeated Dalton Dover (Grade: B) on “Hurricane” | In rehearsal, Blake advised Dexter not to back away from the mic during big notes (as he’d been used to doing while gigging all the time), and Dalton wowed advisers Brooks & Dunn with his range. But the two of them weren’t exactly gelling, and to me, American Idol alum Dexter sounded like he was straining for (and not quite reaching) the notes that he wanted. When they later took their place in the spotlight, the kinks in their performance seemed to have been well worked out. I dug the tone of Dalton’s voice; it was kinda like a countrified Tracy Chapman. But Dexter’s vocal struck me as not only more twangtastic but polished, too. He could scarcely have sounded more Team Blake if he’d been Blake. 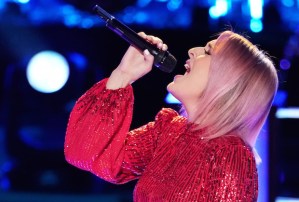 Team Adam: LB Crew (Grade: B) defeated Ciera Dumas (Grade: B) on “Done for Me” | In rehearsal, the contestants struggled with adviser Charlie Puth’s hit; especially, LB seemed to have a tough time scaling the heights of the falsetto. Charlie noted that Ciera had a natural grit to her voice, which didn’t necessarily seem like a good thing in this case: The song is, after all, as smooth as the floor of a roller rink. On stage, LB turned the swagger up to 11 and reminded us of how rich a voice he has. But I’m pretty sure the key had to be lowered for him, because I didn’t hear any Puth-ian falsetto in there, did you? Karly, to her credit, managed to beautifully work some of her noteworthy raspiness into her performance. However evenly matched they were, though, four-chair-turner LB was so into the song, so present and playful, the win had to go to him.

Team Blake: Kim Cherry (Grade: A-) defeated Kendra Checketts (Grade: B+) on “Here” — Kendra stolen by Adam | Before his contestants arrived to practice, Blake cracked to advisers Brooks & Dunn that Kim was a rapper, and that was the aspect of her performance he’d really need their help with. Once they started rehearsing, I was like, “Damn.” They sounded from the get-go like this was going to be a Battle for the ages. B&D suggested that it was going to be so close, “extraneous dynamics” would decide the winner. Even though I wasn’t sure what “extraneous dynamics” were, I still felt compelled to agree. On stage, Kim and Kendra came out swinging, the former giving what Kelly would call spectacular stank face, the latter, matching her for vocal intensity, if not presence. And Lord, when they sang together, they matched up so seamlessly, it aggravated me all over again that Battle songs aren’t being sold on iTunes this season. Had it been up to me, I, too, would have given the win to Kim; she was just a little more turbo-charged at the mic, and there was a hunger to her performance that whet my appetite for more. Not surprised Kendra got stolen, though I’m still flummoxed as to why others Monday weren’t (Rizzi, for instance).

So, what did you think of the Battles on Night 2? Vote for your favorite performer/performance below, then hit the comments.