“Just duet” became The Voice’s unofficial motto Monday as Season 16 launched the Battles, which thanks to their bizarreness — “OK, you guys sing beautifully together… even as you try to blow each other off the stage and out of the competition!” — might just be my favorite of all the rounds. Also, it’s the Battles that let us know if our early favorites are as good as their Blind Auditions made us think that they were. (Don’t let me down, Maelyn Jarmon!)

On hand to help the coaches guide their contestants were onetime Team Alicia Keys adviser Charlie Puth (Team Adam Levine), Season 15’s Comeback Stage coach Kelsea Ballerini (Team Kelly Clarkson), Brooks & Dunn (Team Blake Shelton) and Khalid (Team John Legend). And on hand to rewind through the performances with you was… uh, me. So, who became the first casualties — and Steals — of the Battles? Read on… 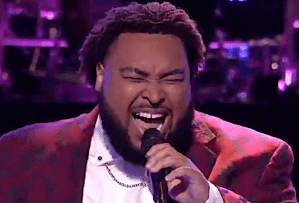 Team John: Shawn Sounds (Grade: B+) defeated Matthew Johnson (Grade: B) on “Never Too Much” — Matthew stolen by Kelly | In rehearsal, John admitted that it “pained” him to pit these two four-chair-turners against one another. But they did sound downright dreamy on their Luther Vandross cover. And when the guys went head-to-head on stage, first of all, it was a blast. Mr. Personality Matthew looked like he was having the time of his life, so much so that I think I got a contact high through the screen. Shawn was less joyful, more showoffy, but the tactic still worked: I couldn’t take my eyes off him. Vocally, they were both good, but compared side to side (ear to ear?), Shawn’s performance suggested that he had greater range and more vocal tricks up his sleeve. 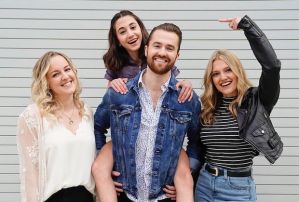 Team Kelly: The Bundys (Grade: A) defeated Mikaela Astel (Grade: B-) on “Songbird” | I hated to see Mikaela, one of my faves from the Blinds, paired up with the show’s first-ever trio. How could any single voice beat three, right? In rehearsal, the 14-year-old kinda answered that question for me, though — she just. Sounds. Special. It’s that simple. Her voice is pure and heartfelt. On stage, she came off like an angel — nervous but an angel nonetheless. Her vocals were clear as a bell and blessed with a stunning vulnerability. There were, however, a coupla pitchy moments, which left the door open for the Battle to go to The Bundys, who frankly performed flawlessly. Their voices blended in a way that virtually defined the word magical. 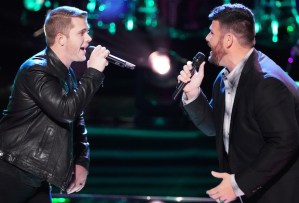 Team Blake: Gyth Rigdon (Grade: B) defeated Rod Stokes (Grade: B+) on “Drunk Me” — Rod stolen by Adam | In rehearsal, Rod hilariously admitted that he was so starstruck meeting Brooks & Dunn, he was fangirling. But once he and Gyth got to singing, they sounded pretty evenly matched. Once they took their place in the spotlight, Gyth showed us right off the bat what a showman working the club scene had made him. Rod’s voice struck me as kinda weird — not bad just unusual, which I reckon is a good thing; it’d make him stand out. The longer this match-up went on, the more raucous it became. These guys were pretty badass. Powerful voices on both of ’em, but I had to give the edge to Rod; the uniqueness of his vocal made him stand out for me. Couldn’t fault Blake for going with Gyth, though. Not only did he slay, but he looks like a country-Western lifeguard to boot. 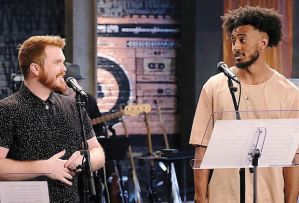 Team Adam: Domenic Haynes (Grade: A-) defeated Trey Rose (Grade: B-) on “I Need a Dollar” | While the guys were rehearsing with their coach and adviser, I was forced to do something I rarely do — give Adam credit; the Aloe Blacc hit that he had his team members tackling really worked for both of ’em. That said, Domenic seemed to have the edge over Trey; his voice sounded as cool and unique here as it had during his Blind. In the moment of truth, Domenic, from the get-go, sang like a man possessed, the growl in his voice demanding that I stop typing this recap and watch his performance. Trey sounded good, too — really good. He was solid and polished, and nailed his falsetto moment. But sweet Jiminy Cricket, there was just no competing with Domenic. Front to back, dude’s a star. 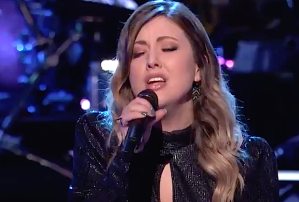 Team John: Maelyn Jarmon (Grade: A+) defeated Savannah Brister (Grade: A-) on “When We Were Young” | Oooh, I had been dying to hear Maelyn sing again since her preposterously good Blind! As for Savannah… hmm, I wouldn’t have remembered who she was, had the show not replayed her audition. (Not that she was bad, mind you; she just hadn’t stuck in my mind.) In rehearsal, Maelyn sounded as spectacular as I’d remembered her being. Savannah, after some coaching, sounded so good, I was mad at myself for having forgotten her. Once they took to the stage, I kept waiting for the moment that Maelyn would be so much better than Savannah that John’s decision would be a no-brainer. But jeez, Savannah really brought it; she demonstrated tremendous range, and the emotion in her voice was heart-tugging. Still, Maelyn was Maelyn, and Maelyn is kinda-sorta perfection to the nth degree. Or whatever comes after the nth degree. She’s that amazing. And at least Savannah will get another chance through The Comeback Stage.

Team Kelly: Jej Vinson (Grade: B) defeated Beth Griffith-Manley (Grade: B+) on “Jealous” — Beth stolen by John | As Beth and Jej started rehearsing, it didn’t sound to me like their voices were gelling tremendously well. Individually, they were lovely, but together? Not so much. Maybe that was because Jej was putting runs, like, everywhere. When the teammates/competitors took their turn on stage, Jej started off singing with stunning vulnerability; Beth, with greater passion, a bit more force. The contrast between their approaches worked pretty nicely, actually, and they managed to come together on the choruses better than I expected. In the final analysis, I’d have to have given the win to Beth — that little bit of “cry” in her voice was unbeatable (well, except for the fact that in Kelly’s ears, Jej beat it). Her performance struck me as real and raw; his, very good but less “present.”

So, which Battle-r did you think gave the night’s best performance? Vote in the poll below, then hit the comments. Am I crazy, or was this a pretty excellent Night 1 of the Battles?