There’s an upside and a downside to giving the TV version of Laura Moon more presence, personality and spunk than she has in the Neil Gaiman novel on which American Gods is based. The plus side? She’s far more interesting, live (well, sort of) and in technicolor than she is on the page. The minus? Now that I’m invested in her, all I want is for Laura and Mad Sweeney to ditch the rest of these celestial crazies and hoard off to a tropical island somewhere. Sorry Shadow: You’re on your own.

Too reductive? Too ‘shippy? Too bad. Because, as this week’s episode makes abundantly clear, the new Laura is a far more complicated character than previously thought — and possibly more complicated than Shadow deserves and/or needs. Read on for the highlights of “Muninn.”

SPIT IN YOUR EYES | In the aftermath of the train crash, Laura is in pieces and Shadow is nowhere to be found. But Betty, Mr. Wednesday’s car, doesn’t have a scratch on her. So Mads and Mr. Wednesday load the pieces of Laura into the trunk — all while she’s protesting loudly that they should be looking for Shadow — and the trio take off for Cairo, Ill. At the funeral parlor, Mr. Ibis stitches her back together, then Mrs. Moon has a choice to make: Go with Wednesday to see someone named Argus, or accompany Mad Sweeney to New Orleans. Though Mad warns her that Wednesday shouldn’t be trusted, she accompanies the old man as he visits the god of surveillance. 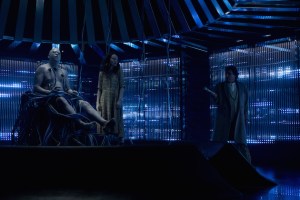 As they enter the super shady building where Argus resides, Wednesday notes that “revenants” like Laura tend to come back with one mission in mind, and when it’s done, they “slip off this mortal coil.” She replies that her mission is Shadow, but Wednesday isn’t convinced. Then they make a few sacrifices (not gonna lie: I did not completely understand this part) as they work their way up to where the many-eyed Argus is watching the world. The whole time, Wednesday needles Laura about how she’s not the same person Shadow fell in love with, then he instructs her to do something he cannot: Kill Argus.

At the exact same time, Tech Boy and a social media-happy version of Media called New Media are also visiting Argus, hoping to use his all-seeing drones and such to find Shadow. When Tech Boy’s threats don’t work, New Media basically has sex with Argus — one of his cables slithers up her skirt, at least, and there’s a lot of moaning — but then Laura sticks a blade in the old god and that’s that. Oh, and after she’s done the deed, her heart beats the way that it did when Shadow kissed her at the Motel America. A pleased Wednesday promptly takes his leave of her, pointing out that Shadow loved a girl who tried to off herself with bug spray… and Laura’s not that woman anymore. 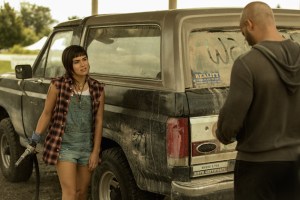 THERE’S A HITCH | Shadow did survive the crash, of course, but he’s in rough shape as he limps away from the train’s wreckage. Voices whisper “Cairo” and “Egyptian” to him; meanwhile, Mr. Wednesday’s crow Muninn delivers news to his master about Shadow’s progress. At a gas station, Shadow tries to con the unsuspecting cashier out of $20, but he’s caught in the act by a savvy young woman who shames him into buying her gas, instead. The young woman winds up giving Shadow a ride to Cairo. “You’re human, right?” he asks her at one point, eyeing the bull tattoo on her arm. She is, and her name is Sam Blackcrow. She spouts some wisdom at him along the ride, and eventually drops him in front of Ibis & Jacquel Funeral Home. Shadow is irked to see Wednesday chillin’ like a villain at the parlor when he gets there, but the Old God refuses to answer any of Shadow’s questions and gaily promises he’ll wake up feeling “amazing” in the morning.